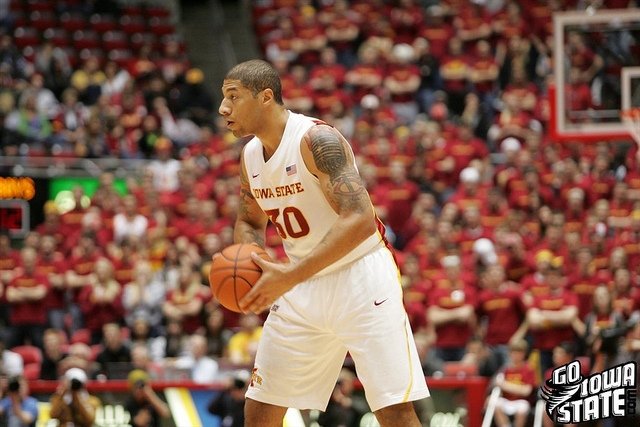 Tied with Kansas State at 70 with 22.5 seconds to play, all 13,456 warm bodies inside of Hilton Coliseum knew where the ball was going. At that point, we were all living in Royce White’s world.

With around seven seconds to play on the left wing, White peeled off of a Chris Babb screen and knocked down a tear-jerking 8-foot floater over Rodney McGruder.

Inside Iowa State’s huddle with 22.5 seconds left on the clock, White actually pushed for senior Scott Christopherson to take the final shot.

"That’s why I was telling them to give Christopherson the ball," said White of his free throw struggles.

Fred Hoiberg is known for being a coach who has confidence in his players. That fact was never more evident than with White in what could be looked back upon as the most important possession of Iowa State’s season.

“I did call that play to get him coming off of a ball screen," said Hoiberg. "He said, ‘Coach, what if they foul me?’ I said then step up and knock down the free throws.”

Royce White – In addition to sinking the game-winner, the game-high 22 points, eight rebounds, four assists and three blocked shots, Royce White threw down three dunks that had "Sports Center Top 10" written all over them.

"He is a nightmare of a matchup," said Kansas State head coach Frank Martin. "Our kids tried to guard him.”

White said that it was the first game-winning shot of his career, at any level.

White played high school basketball for a close friend of Frank Martin, who continuously praised the Iowa State sophomore after the game.

“He’s awesome. I root for that kid every day," said Martin. "After reading that story and knowing what he does every day, I’m rooting for him even more now. I’m all about people finding success and obviously he is doing an unbelievable job of leading his team."

Chris Allen – He couldn’t have picked a more perfect time to snap out of his recent funk.

Chris Allen went 3-for-3 in the final eight minutes of the game on his way to a 15 point, five rebound performance. Allen had gone a combined 2-for-11 from the field in Iowa State’s last two games.

“We had a long talk yesterday and just talked about going out and playing and being aggressive," said Hoiberg. "I put him off the ball a little bit more tonight and he responded with a big time game.”

Allen got into foul trouble early and only played 10 minutes in the first half.

“I knew that if I stayed active and if I stayed moving then eventually I was going to get a good shot and I was going to knock it down," said Allen of his clutch 3-pointer with 7:55 to play. "When you work on something so much, when you get a chance at it, you have to be confident and take it with confidence.”

White’s handles were sick and his dunks were thunderous, but Iowa State doesn’t win that game without Chris Allen stepping up in the clutch.

As Hoiberg noted after the game, it was a total team victory.

Grit – With 14:27 to play, Iowa State trailed the Wildcats by 14 points. Now ask yourself this question. Back in December, how would this team have responded to a deficit like that vs. one of the most sound defensive teams in all of college basketball?

“A while ago, we probably would have gotten beat by 30 tonight, how we were playing back then and how our confidence was," said Chris Allen. "Everybody is on the same page I feel like. Everybody is trusting each other, trusting what coach is telling us and it is coming along. It’s coming together.”

That it is. After being out-rebounded 21-13 int he first half, the Cyclones won the battle of the boards in the second half 18-13.

Turnovers – For a team that was averaging nearly 13 turnovers per game heading into Tuesday, I’d say that the stat of committing only 10 turnovers vs. Frank Martin’s squad was encouraging.

First half – Down 36-29 at the half, the only thing that Iowa State fans had to smile about was the Red Panda Acrobat halftime show.

During the game’s first 20 minutes, Iowa State got sucked into Kansas State’s style of ball. The Wildcats imposed their will on the Cyclones.

“It was a tough first half for me to watch. We weren’t cutting. We let it affect our defense," said Hoiberg. “We got on them pretty good at halftime and our guys responded.”

That’s the key. The Cyclones responded to a vintage half of hard-nosed, Kansas State round ball.

“We kind of got punched in the mouth first but we were able to come back and win a fight," said White. "You have to be mentally tough for a win like that against a team like that plays so tough.”

3-point defense – Kansas State averaged only 4.8 3-pointers per game heading into this bout. The Wildcats went 7-for-12 from downtown on Tuesday.

No third – There’s no point in turning a fine bottle of champagne into skunk Natural Light. This was a great win for Fred Hoiberg’s program.

— The win snapped a five-game home losing streak to Kansas State that dated back to 2006.

— Scott Christopherson’s 11 points made it the 49th double-figure scoring game of his career. 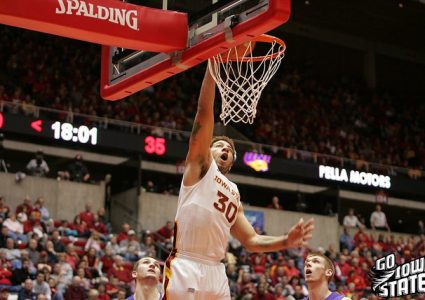