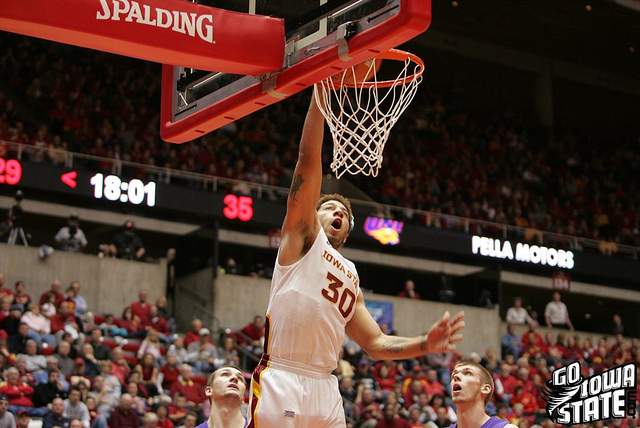 AMES — If you didn’t see that coming, you should have. For once, the pundits were right.

Iowa State entered Saturday as the trendy pick for "upset of the day" in college basketball and Fred Hoiberg’s Cyclones did not disappoint by defeating No. 5 Kansas 72-64.

“It’s a huge win for our program. The sellout crowd was as loud as I’ve heard it there in a while," said Hoiberg. "Hilton Magic was definitely in full effect."

Here’s how it all went down.

Royce White – He did what big time players are supposed to do. When crunch time came around, Royce White produced. No – He dominated. With five minutes to play, White scored eight straight points for the Cyclones in rout to the eight point victory.

That was Hoiberg’s plan.

“It was definitely the plan coming out of the timeout," said White. "Coach told us that if it gets under 10 or if it gets in the 20 area that we were going to a power set and work off of me catching it in the block. I wanted to stay aggressive and my teammates kept believing me. We did what we needed to do.”

"Royce White is a matchup problem," said Kansas guard Tyshawn Taylor. "You’re not going to find too many guys with his size and his skill level being able to do the things that he does with four other guys who can shoot the ball around him."

White even made free throws on Saturday, going 6-for-11 on the day but most importantly making six of his eight attempts in the second half.

“It felt good. It’s like a type of relief you know? Going up to the line, it becomes an island up there when you’re on a bad streak," said White. "I woke up this morning dreaming about missing free throws. I went to the gym this morning and shot free throws and tried to get it right.”

Rebounding – Kansas entered this game as the Big 12’s best rebounding team with a margin of +7.3 on the season. For the second time this season, Iowa State owned the glass vs. the Jayhawks, out-rebounding KU 36-23 on the day.

“The reason they got us on the boards is I just thought that they out-manned us," said Kansas coach Bill Self.

Iowa State won the battle of the boards in Lawrence two weeks ago as well by a 49-41 mark.

Along with White’s nine, Melvin Ejim and Tyrus McGee chipped in with eight and six rebounds respectively.

Kansas’ guards only accounted for four combined rebounds in the game.

Clutch – Towards the beginning of the season, Iowa State had trouble putting teams away. Remember the Central Michigan and Northern Colorado games?

During their last two home games, the Cyclones have played their best basketball when it means the most. That’s down the stretch, where Iowa State out-scored Kansas 19-11 over the last seven minutes of the game.

“Our offense down the stretch, that was as poised as we’ve played," said Hoiberg. "In that past, we’ve gotten a little bit sped up and we’ve rushed some things that have caused turnovers or led to bad shots."

The Cyclones made eight of their last nine free throws in the game and only turned the basketball over six times in the second half.

"We executed. We had great movement," said Hoiberg. "We’re trying to get our motion game more in tune. The last five minutes was the best that’s been.”

Bench play – Iowa State’s reserves out-scored Kansas’ 15-5 in the game and once again, it’s hard to imagine the Cyclones winning this game without the services of Tyrus McGee and Anthony Booker.

Bill Self raved about McGee’s energy after the game. Booker hit two key 3-pointers and showed grit in the paint as well.

“I thought that Booker really battled out there," said Hoiberg. "He’s a big and strong kid. He used his body very well."

Missed dunk – I’m still not sure how All-American big man Thomas Robinson missed a wide-open dunk at around the five minute mark, but the mishap dealt a serious blow to Kansas’ chances at victory.

Iowa State’s frontcourt held Robinson to 13 points on 5-of-11 shooting.

“Our bigs deserve a lot of credit for the work that they did on that front line," said Hoiberg.

“Just doing what our coaches have been telling us," said White. "Just building that wall. Just staying straight up, staying vertical. It’s hard to play defense in the post but we did the best job that we could.”

Turnovers – Iowa State led by three points at halftime, but it could have been a lot more had the Cyclones not committed 13 first half turnovers. Iowa State’s 19 total turnovers accounted for a season-high in that category. Somehow, the Cyclones still managed to knock off a top five team. Some things just don’t make much sense…

Blank – New rule: When the Cyclones defeat a top five team, we only go with two down. Deal?

— Prior to Saturday, Iowa State hadn’t defeated a ranked opponent at home since Feb. 5, 2006 over No. 25 Colorado.

— Iowa State’s plus-13 rebounding margin was its highest since a plus 15 effort vs. Rice on Nov. 26.