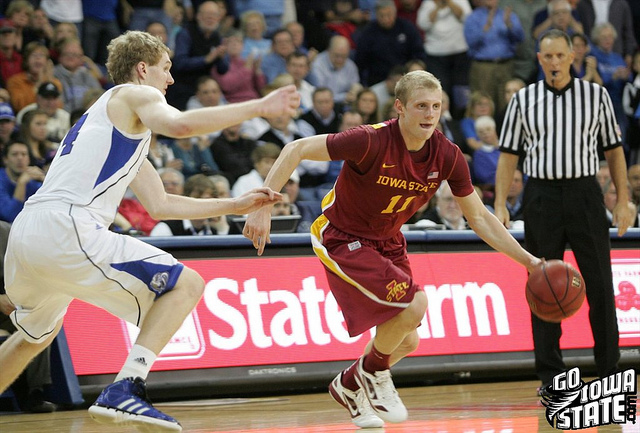 The first month of Scott Christopherson’s senior season didn’t go the way he had planned.

After playing off of the basketball for the majority of his life, Christopherson saw the talent around him and thought that a move to point guard was the best thing for his team.

“He approached me about playing point guard this year," said Iowa State head coach Fred Hoiberg. "He came to me with what was a very unselfish move, I thought, to get Chris (Allen) back off of the ball and get Chris in more of his natural position."

It was a selfless act to get others the ball by the most efficient 3-point shooter in Iowa State history.

The move ultimatley didn’t work out. The Cyclones started the season with a disappointing 6-3 record and Christopherson looked, well, very un-Christopherson-like.

Last week, Hoiberg made the decision to take Christopherson back off of the ball. With Allen running the show, the Cyclones responded with two wins, one over rival Iowa, where Christopherson scored a season-high of 16 points.

NOTE: In the first eight games of the season during the point guard experiment, Christopherson took an average of 6.75 shots per game. During his two games off of the ball, the senior has averaged 9.5 attempts.

“I saw it with Scotty in practice yesterday and shoot around today, you could just see it in his fact that he was going to come out here and have a good game," said Hoiberg. "He was very focused."

Christopherson’s slump appears to be behind him and while Iowa State’s point guard dilemma is far from being solved, Allen’s recent assist-to-turnover ratio of 9-to-3 is reason to believe that Hoiberg has things on the right track.

"I just have to thank the coaching staff for having faith in me," said Christopherson. "The whole time they’ve been telling me to keep playing, keep playing and keep attacking. I’ve played on teams that didn’t necessarily have that and knowing that those guys have got your back the whole time, it’s a lot of fun to play for them.”