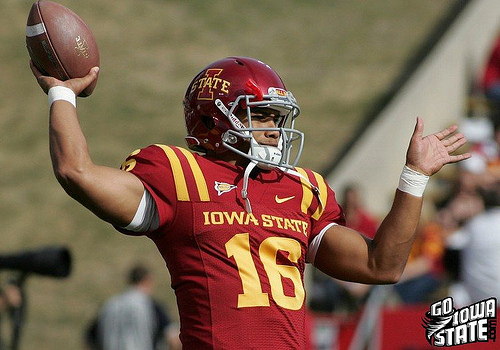 They all count the same in the win column.

Iowa State’s 13-10 victory against Kansas on Saturday won’t be remembered for its brilliance, but when it matter most, the Cyclones played their best football.

A dominant last 10 minutes pushed Iowa State to its fifth win – one away from bowl eligibility with three games left on the schedule.

The numbers say the Cyclones completely shut Kansas down after halftime and scored just enough points to secure the win. The Jayhawks netted only 73 yards of total offense in the second half and four first downs.

The Iowa State offense came through when it needed to with a crucial drive capped by the suddenly reliable leg of Zach Guyer, who drilled a 42-yard field goal to give Iowa State an insurmountable 13-10 lead.

“I found out as a football team when certain individuals aren’t having the performances in the past that have led us, we can still win football games and be competitive,” Iowa State coach Paul Rhoads said.

The Cyclones started to grab control of a lackluster game with 9:52 left to play. With new players seemingly all over the field, and Iowa State backed up on their 13-yard line, the Cyclones found their footing.

Quarterback Jared Barnett hit Aaron Horne for 17 yards on the first play of the drive. After a pair of solid runs by Barnett, the signal caller found Albert Gary for an 11-yard gain down to the Kansas 34.

Barnett didn’t play his best game Saturday, but he still finished with 175 yards passing and a career-high 125 yards on the ground.

“I knew they would start spying on our running backs,” Barnett said. “That opened up the zone read for me.

“The o-line was blocking really well. They were making things a lot easier for me, so I can’t take all the credit.”

The drive stalled at the Kansas 24-yard line, but the Cyclones took the lead on the strength of Zach Guyer’s leg. The Iowa State kicker has made his last six attempts.

“I hit the ground a little bit, so I knew it would be low, but it was right down the middle, which was good,” Guyer said. “I felt comfortable out there.”

So did the Cyclones’ defense. Iowa State held the Jayhawks to two yards on their final two possessions and no first downs.

“We played with a different energy level than in the first half,” Rhoads said.

Iowa State pounded Kansas on the ground to salt the clock away. The Cyclones gained 40 yards on five plays before taking a knee behind a patchwork offensive line that started freshman Jacob Gannon at right guard and rotated Carter Bykowski and Kyle Lichtenberg at right tackle.

A group of unheralded receivers also responded to the challenge on Saturday. Gary finished with five catches for 57 yards. Jarvis West added 37 yards receiving and 54 yards on two kick returns.

Don’t forget Horne. He put Iowa State ahead 10-7 in the second quarter with a nifty 18-yard touchdown run where he slipped away from a handful of Jayhawk defenders to reach the end zone.

The Cyclones racked up 251 yards on the ground and 426 yards of total offense in the win.

The victory thrusts Iowa State one step closer to its goal of a bowl game. Yes, the schedule is daunting with Oklahoma State at home and road dates with Oklahoma and Kansas State left, but Rhoads is certain his team is ready for the challenge.

“I won’t have to chum the waters,” Rhoads said. “We’ve won two games in a row. The Texas Tech game was the most complete victory since we’ve been here. Today was a beautiful victory.

“Now, we need to build on that. They know where they are at. They knew where they were at, at 3-4 in Lubbock. I don’t have any doubts I’ll have a very focused team everyday we set about our business.