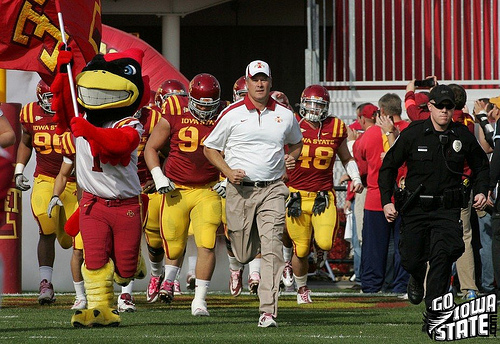 No, Cyclone fans, your eyes are not deceiving you.

That is Zach Guyer drilling field goal after field goal. After booting the game winning score from 42-yards out Saturday, the Iowa State kicker is now as reliable as an old pair of jeans.

Guyer may have earned player of the game honors in the 13-10 victory against Kansas with a pair of field goals.

“He’s perfect for four games straight,” Iowa State coach Paul Rhoads said. “He’s been practicing that way. I have a lot of confidence (in him).”

With time dwindling and the game tied at 10, Iowa State faced a fourth down at the Kansas 24-yard line. There was no question who was coming out to kick the ball. After flirting with two kickers earlier in the year, Guyer is now clearly the choice over Grant Mahoney.

The senior drilled the critical field goal to push the Cyclones to their fifth victory of the season. Earlier in the game, Guyer connected from 32 yards for Iowa State’s first points.

“It always helps when the head guy has confidence in you,” Guyer said.

It turns out Jared Barnett is human.

On Saturday, the Iowa State quarterback didn’t play his best game but he recorded the only stat that matters – a win.

In his young career, Barnett is 2-0 as a starter. That’s not all – he continued to show a knack for running the football as he scampered for 125 yards on the ground one week after rushing for 92.

“(Barnett) has a good eye,” Iowa State coach Paul Rhoads said. “And he has the ability to make cuts like a running back does.”

Through the air, Barnett connected on 16-of-30 passes for 175 yards. He rebounded from a pair of turnovers to move the Cyclones down the field in the fourth quarter for what turned out to be a game winning field goal with 4 minutes, 30 seconds left to play.

When it was time to win a football game on Saturday, Iowa State turned to it’s big boys up front. For the second-straight week, the offensive line paved the way to a Cyclones’ victory.

“We were playing with a patchwork offensive line again. Jacob Gannon – who is a redshirt freshman – is really not ready to be playing. He stepped in there and played the entire game. You have quote, unquote backups still playing at the right tackle position.”

And yet, it didn’t matter as Iowa State rushed for 251 yards on the ground, including 125 from Barnett.

On the last drive of the game, the Cyclones used what running back Jeff Woody called “grind tempo.” On five consecutive plays, Iowa State called the same play to Woody, who bulldozed for 45 yards to seal the win.

It was just another ho-hum performance for the Iowa State linebackers on Saturday. Jake Knott, A.J. Klein and Matt Tau’fo’ou combined for 27 tackles, including three for a loss.

The trio also helped hold the Jayhawks to 73 yards after halftime and four first downs.

Iowa State punter Kirby Van Der Kamp is unstoppable with the football in his hands. At least he is when Rhoads calls a fake punt.

After converting another on Saturday, the sophomore is 3-for-3 in his career on fakes (two rushing first downs, one passing).

On fourth-and-5 from the Iowa State 39-yard line, the Cyclones lined up to punt. Instead of booting the ball away, Van Der Kamp ran to his left for 17 yards and a first down.

“I was just nervous back there, hoping my blockers do the right thing,” he said. “When I got around the corner, no one was there. My guys sealed the corner and I just strode in for the first down.”

–       Jared Barnett’s 125 yards rushing is the most by an Iowa State quarterback since 2000 when Sage Rosenfels ran for 140 against Colorado.

–       Aaron Horne’s 18-yard touchdown run was the first rushing TD by a Cyclone wideout since 2003 when Lane Danielson accomplished the feat.