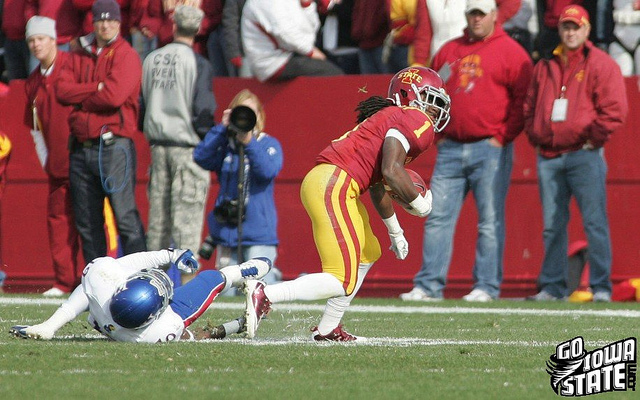 AMES – Occupants of Cloud Nine should make room. The Cyclones are staying awhile.

After a performance like Friday night, they deserve to celebrate.

The Cyclones (6-4, 3-4) did just that. For one night, the college football world revolved around Iowa State. The Cyclones delivered in what amounted to a four-hour national showcase for the university.

Running back Jeff Woody punctuated perhaps the biggest win in school history with a 4-yard touchdown run in double overtime.

The win wasn’t a fluke. The Cyclones were better then the Cowboys (10-1, 7-1) in all three phases of the game. When it mattered most, Iowa State made the big plays and clinched bowl eligibility for the second time under Coach Paul Rhoads.

“I’m very proud of the Cyclone nation that they got to experience it,” Rhoads said.

Mirroring the fearless attitude of its coach, the Cyclones refused to give up. Trailing 24-7, Iowa State staged an unforgettable comeback.

The momentum started to shift in the third quarter when James White scampered 32-yards untouched for a touchdown to pull Iowa State within 24-14. The Cyclones recovered an onside kick on the ensuing kickoff, and it was evident something special was happening at Jack Trice Stadium.

“It combined into the perfect storm of finding a way to win and proving we are a good team,” Woody said.

Iowa State reeled off a picture perfect drive to tie the game in the fourth quarter. Barnett moved the Cyclones 89 yards on 12 plays to knot the score. The freshman signal-caller connected on 7-of-9 throws for 80 yards, including a 7-yard strike to Albert Gary in the end zone.

Barnett completed 31-of-58 passes for a career-high 376 yards and three touchdowns in the game.

Iowa State’s defense more than did its part. Oklahoma State entered Friday’s game averaging 51.7 points per game and had only been held under 40 points three times this season. Make that four times now as the Cyclones forced five Cowboy turnovers.

Still, Oklahoma State nearly won the game in regulation but kicker Quinn Sharp missed a 37-yard field goal with 1 minute, 17 seconds left in the game to send it into overtime.

It didn’t take long for the Cyclones to jump on top. On the first play, Barnett rolled left and threw back across the field to a wide-open White who sprinted into the end zone for a 31-24 advantage.

Oklahoma State answered with a touchdown of its own to force double overtime. That’s when the Iowa State defense made the game’s biggest play. Linebacker Jake Knott tipped Brandon Weeden’s pass up in air where it was snared by safety Ter’Ran Benton for the interception.

The Cowboys’ signal caller finished with 476 yards on 42-of-58 passing, but more importantly the Cyclones harassed him into throwing three picks.

"We’ve got a blue collar football team,” Rhoads said. “We got a group of young men that put their hard hats on every day and continue to go to work.”

Oklahoma State had no chance of stopping the Cyclones after Weeden’s third interception. Woody steamrolled the Cowboys’ defense with two punishing runs down to the 4-yard line. The 240-pound running back capped Iowa State’s historic win on the next play.

“It parted like the Red Sea,” Woody said. “The hole was three yards wide.”

The victory clinched a bowl game for Iowa State and was the program’s first against a top-six team. Before Friday night, the Cyclones were 0-56-2 playing teams ranked that high.

“It was very emotional,” senior Darius Darks said. “For us to come in and get this win on the last night is special.”