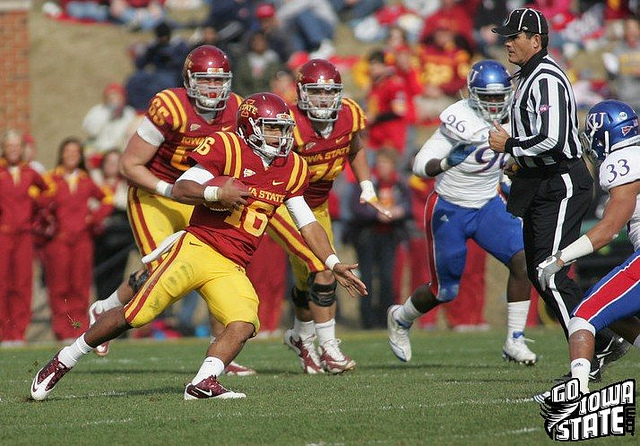 One reporter posed a simple question to head coach Paul Rhoads regarding his quarterback situation.

Now that Barnett led Iowa State to a 37-23 road victory over TCU, what does he have to do to keep his job?

“Keep doing the things that he did on Saturday afternoon in Fort Worth and that’s throw the ball on time. Getting it out of his hands,” said Rhoads. “Making good decisions in the run game. Making good decisions at the line of scrimmage. Being accurate with his passes. Those kinds of things.”

Protecting the football is key. Barnett threw what he referred to as an “awful” interception in the second quarter of Saturday’s game. But with Barnett and as was the case with Steele Jantz as well, it isn’t always all on the quarterback.

“A lot of the turnovers that we had weren’t just Steele’s fault,” said Barnett. “We still have to protect the football and make better decisions with the ball in our hands.”

*** Expect much of the same from last year as far as Iowa State’s game plan vs. the Wildcats is concerned.

“We are probably going to have the same game plan that we had last year,” said Bernett. “We have to executed it better. That was our problem last year. We didn’t execute our plays well last year. That’s why we lost that game.”

"The guys love it when Coach Mess calls it," said Barnett. "We want him to call it more but for obvious reasons, you can’t call trick plays every other play. The guys like it and guys love Coach Mess.”

*** Barnett on his emotions in subbing in and out from starter to back-up.

“It’s definitely a roller coaster. I have to keep my emotions lined up. I can’t get too high. I can’t get too low. I still have to prepare like I am the starter. That’s what I was doing while Steele was playing. Now I just have to elevate that now.”

“They are similar to us in a lot of ways. We don’t have a lot of big name guys but we play as a team, we go out, execute and get things done. They just play well together and don’t make a lot of mistakes.”

*** A reporter asked Paul Rhoads if he goes into every game with a number in mind of points that the Cyclones will need to score to win.

“71 should win it,” joked the defensive minded head coach.