What he is: According to Rivals.com, Irving is a 6-foot-7, 230-pound defensive end out of San Jacinto, Calif. However, according to the current roster posted at Cyclones.com, Irving came into Iowa State at 261-pounds.

What he does: Irving is tremendously athletic for his size. He has good quickness and his length will allow him to keep space between he and the blockers. This looks to me like a guy who will be especially helpful in the pass rush and with some skill and technique development should be able to help stop the run.

Strengths/Weaknesses: Obviously, Irving is very tall for a defensive end. That can be both a strength and a weakness. He will have to have good technique to be able to maintain leverage in run situations but when it comes to a pass rush, I think it will be very hard for offensive lineman to stay in front of him as he should be able to maintain space so that the opposing tackle cannot engage. His quickness is above average, which further helps his cause. He does need some work on the technique side of things. Like a lot of players whose are simply better athletes in high school, Irving often relied on that and it worked for him. That won’t work in the Big 12. He will have to work on getting off the ball as well as complimentary moves to just a straight speed rush off the edge.

What’s in store: This is one of the guys in the class who most people are unsure of as far as what they do in their first year. I don’t know if he will play. That will likely depend mostly on his technique and if he is able to learn enough to contribute. If he isn’t, a redshirt is in order. I think he has enough size to help Iowa State for maybe 10 plays a game. But if he is easily blocked, Iowa State will have other options and a redshirt will be used. Beyond that, I think the sky is the limit for Irving. You cannot teach his length and speed. It seems like I have said it both years now, but this staff is recruiting measureable and coaching them up. David Irving is the epitome of that. If he can be coachable, put in the time and work as well as an attitude on the field, there’s no reason he couldn’t be an All Big 12 player for at least one year. Everyone knows that Iowa State needed help at defensive end and I think Irving was a great addition in 2011.

He looks to me like: Jason Pierre-Paul, except two inches taller. Paul was a raw pass rusher which I think is what Irving will be called by the end of his career. In the Big 12, I will take a pass rushing defensive end over a run stopper all day. 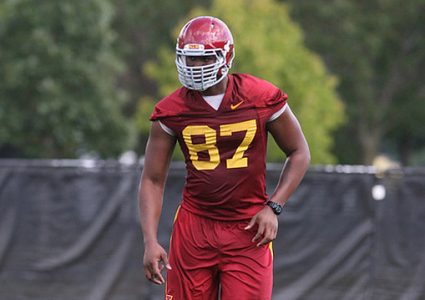 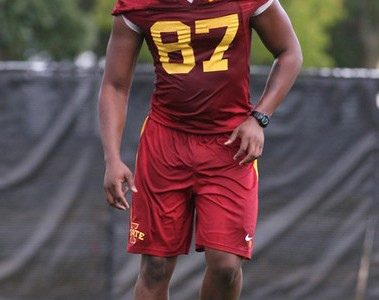