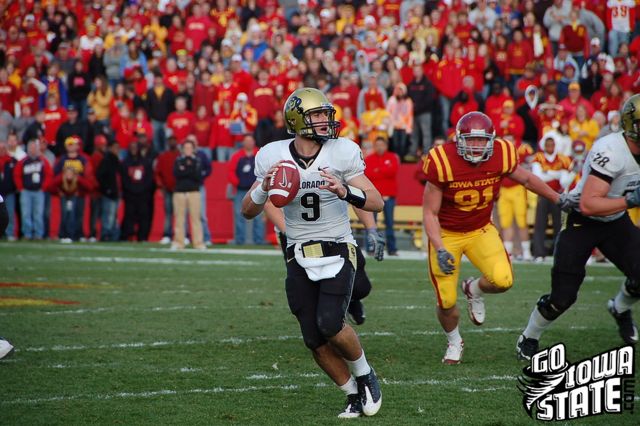 Ever since preview magazines started coming out in June, I’ve been a little bit frazzled as to why many pundits seem to be so high on Kansas and Colorado.

Kansas has a new coach and the chore of replacing quarterback Todd Reesing, Dezmon Briscoe, Kerry Meier and Jake Sharp just to name a few. That is a lot of offensive firepower.

Then there is Colorado and well, let’s just leave it at that. They are Colorado. Dan Hawkins is the still the head coach there in Boulder and guess what? If you said to yourself “he doesn’t know who his quarterback is,” you are correct.

So I got to thinking this afternoon. Iowa State (Austen Arnaud) and Missouri (Blaine Gabbert) are the only two North schools that have set quarterbacks heading into camp. Zac Lee appears to be the favorite at Nebraska. But really, can anyone forget about this?

That’s what I thought.

“The quarterback spot is definitely wide open at this point in time for us, and we’ll see how that all shakes out,” Gill said on Wednesday. “Obviously, the quarterback position is a position where people have to lead. But at this point in time, I feel good about the competition. We’ll see how it all shakes out. I think we’ve got good people, and we’ve got some good players. Obviously, we have an outstanding staff to put things together too.”

Other candidates will be red-shirt freshman Jordan Webb and JUCO transfer Quinn Mecham.

Kansas has a decent running back returning in sophomore Toben Opurum but hardly anything at wide receiver.

My point is that it isn’t like one of these quarterbacks is going to have a ton of help. The Sporting News recently ranked the Jayhawks 31st in the nation. I will go on record right now and say that is absolutely insane.

The age-old question, Hansen or Hawkins?

Think back to the 2009 season for a second. Do you remember how terrible Colorado’s offense actually was? Here are some numbers to refresh your memory.

The Buffaloes ended the year ranked 104th nationally in total offense. They ranked 113th in rushing offense. So I thought that the following question by a reporter was a fair one for head coach Dan Hawkins on Wednesday in Dallas.

Q. Dan, in this league, you’ve got to score 30 points to win most games, it seems like. Where do you see the improvement in the offense?

This was Hawkins’ reply.

“Well, a lot of little things. You know that. I mean, sometimes it can be a catch here, a turnover there, a penalty there. I thought our defense really got better as the season went on and helped us in that era. And you’ve got to make a couple of kicks that go into that point total as well. It can be a kick. It can be a turnover, but for us it’s just garnering a little momentum that way and understanding that the difference is very thin and understanding, preparing that way, practicing that way, as well as playing that way.”

Maybe I am crazy, but when your offense ends the season ranked 104th nationally, you’ve got more problems than missing a couple of kicks and committing a few penalties.

Having said that, two seniors and two juniors with a sophomore will occupy Colorado’s offensive line that should by solid. Rodney Stewart, who ran for 872 yards and nine touchdowns last season, returns at running back.

As a whole, I expect Colorado’s offense to improve off of last year. But they still don’t have a true number one quarterback. Take your pick. Junior Tyler Hansen or senior Cody Hawkins?

“It’s like the rest of life. The goods and bads,” Hawkins explained. “The good is you’ve got guys. You’ve got guys you can believe in. You’ve got guys who can play. The bad thing is you’d rather have one guy be clear front and center, but it’s not that way. So I think as long as those guys handle it, which they have — and our team really doesn’t care either. Like I said, you could split them with a hair. I don’t think our team really goes one way or another with one guy or the other.

So there’s two sides to it just like in a whole lot of other things.