Happy Wednesday Cyclone Fanatics! We’ve gone a full two weeks without a mailbag column here on the site. With Signing Day last week, our minds were elsewhere. However today, I am ready to roll. Let’s get started with a heartbreaking question by SuperCy.

SuperCy writes: What is your thought on Viking fans rooting for or against the Saints? My thought is that you cheer for the team that knocked you out.

CW: As a Viking fan, I was cheering for the Saints on Sunday, basically because they are in the NFC. I always root for the NFC in the Super Bowl. I was happy that they won, but sick too. Just thinking about the fact that the Vikings absolutely blew that game in the Super Dome makes me want to cry. The Vikings are a better football team than the world champs. That almost makes me feel worse about the NFC Championship Game loss.

Cyclonepower: What seed do you think we will be in the conference tournament? And what team would be an ideal first round match-up (realistically)

CW: I was talking about this with a colleague of mine earlier today. I think that Iowa State will eventually get the 10th seed in the tournament, which would put them at a 6 p.m. tip on Wednesday, March 10 against the 7-seed. The 7-seed could still be anyone ranging from a team as good as Baylor to a lower tier team like Oklahoma or Texas Tech. Ideally, I’d love to see Iowa State match up with Tech. That’s a game that I honestly think that Iowa State would win in Kansas City. This would ultimately create a second-round game against Kansas State, Texas A&M, Missouri, or Texas. I think that Kansas State is the best of those four so let’s go that route. As we saw on Saturday, Iowa State has the horses to compete with the Wildcats. The guys just have to learn how to play 40 minutes of basketball. I do know this. With Craig Brackins and Marquis Gilstrap on Iowa State’s roster, if clicking, Iowa State could be a scary team for any of the big boys to meet up with in Kansas City. Having said that, I don’t see any way that the Cyclones could rattle off four straight to make the tourney.

Mustangcy writes: When will Jaime Pollard (the man whose opinion is the only one that matters) make some kind of comment on the status of men’s basketball and of the status of Greg McDermott?

CW: There is no reason for Jamie Pollard to make any sort of statement regarding the program until after the season, if that. Greg McDermott has a long contract at Iowa State. As angry as some fans are, Pollard has no obligation to make public statements on the program at this time, especially in the middle of the season. That wouldn’t do anybody any good. It would be a distraction for everybody involved.

D4nim4l: Too many times a mid-major coach does things great at his level and then gets a job at a BCS program and struggles with the transition to a fast paced, more athletic and more physical game night in and night out.

That said, what would hold more merit if we were to replace Coach McDermott in the next few years. Going after a mid-major coach or hiring a long time assistant who has had success on BCS level programs and is ready for a head coaching job?

CW: That’s a very well thought out question and I appreciate that. There are a lot of ifs in there. Like I wrote in the question above, McDermott still is on contract here in Ames. He’s still the coach and will be for a while, according to his contract. The only premise I have to answer this question is by looking at what Jamie Pollard did when he hired his second football coach at Iowa State. He basically went the same way, hiring a defensive coordinator from a BCS school. However, he did a 180 as far as the personality of that man goes. Would he do the same with hoops?

MNCyGuy: How’s the wedding planning going? Have you found yourself contemplating running out to Vegas just to end it yet? I’ve found it quite tempting.

CW: I actually wanted to do the whole Mexico thing when we first got engaged. That way, you get a sick party down in Mexico with your close friends and family, then, you throw a sick party at home with more friends and family. It is a win-win situation for all. But then you have to worry about grandparents not being able to attend etc. Just didn’t work out. I never really thought about Vegas. The whole getting married in an Elvis costume was never really my cup of tea. I would do that for my bachelor party but every loser and his dog does that now thanks to The Hangover.

Swanson10 writes: Do you think Brooklynn Deckers cover on the 2010 Swimsuit edition had anything to do with how much time she spends talking to DP and the crew?

Clonefan32: Gilstrap’s comments on coming back: truthful or lip service?

CW: In my opinion, lip service. But what do I know? I didn’t think that Craig would be here for this season.

Yaman3 writes: How does this season end? I mean do we make huge, unexpected run to get on the bubble or do make a small run to get into the NIT, or do we fold up for the season and end it early?

CW: Despite the losses, we have seen some progress with this team. Rebounding is better. Free throws are better. The effort is there. They have to stop these brutal five minute dry spells as some point don’t they? I’ll go with being on the NIT bubble with upcoming wins over Oklahoma State, Nebraska, Colorado and one in Kansas City.

GeronimusClone writes: Pirates or Ninjas? and Why?

Cdekovic: What is the status of the search to replace Chris Ash? Will someone internally be moved into the position or is PR looking outside the program?

CW: Everything that I have heard, unofficially of course, points to former Dan McCarney assistant Bobby Elliot landing the gig. That’s for the secondary job at least. As far as the recruiting coordinator portion of the gig, I wouldn’t be surprised if a guy like Shane Burnham is promoted from within.

12alphmacchio writes: Have you done your taxes yet? If so, is there a cyclone out there that we can support / have an ad on CF?

CW: My roommate does mine for me. We should have an official “tax guy or gal” here on CF. Great idea. Hey tax people, want to advertise on CF?

IowaSTATCyclone writes: How do you think Kevin Jackson’s approach to tournament matches differs from Sanderson’s?

CW: Asking me about wrestling is like asking GeronimusClone about being a tactful human being. The two don’t mix. I’ll tell you what I’ve heard about KJ’s approach. I’ve heard that he teaches a much more offensive, aggressive style of wrestling than Cael did.

CycloneYoda writes: Final 4 teams. Who are they? Only 4. Support your decisions. You will be graded.

CW: 1 – Kansas…I picked them to win it all at the beginning of the season. They are really, really good. What else do you need? 2 – Syracuse…they’re really long, really talented and their resume speaks for itself. 3 – Kentucky…guard play is college basketball and John Wall is the best. 4 – Georgetown – Austin Freeman, Greg Monroe and Chris Wright are not only super-talented, but they’re super-tough. They’re tournament tough. So there you go.

Ms3r4ISU writes: Is there a secret to Bill Fennelly’s success? If so, how much is it worth?

CW: The secret to his success is simple. The first is the fact that he is a great coach who gets the best out of what he has. The second is the fact that his is an honest, good human being. Parents want their girls to play for guys like him. Being a good guy is always a good thing. 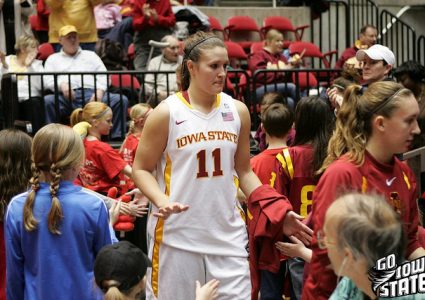