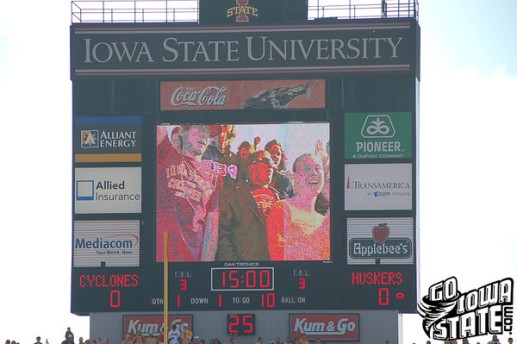 I am going to try to not over exaggerate right here but honestly, yesterday was one of the nuttiest days I remember in the Big 12, in quite some time.

The wins and losses of certain teams wasn’t really what made the day so loco. It was more the spreads of some of these match-ups. I was double-taking the scoreboard on my computer all night long in the Jack Trice Stadium press box.

Here are a few more of my thoughts on the weekend that was in the Big 12 Conference.

Kansas State – The Wildcats, along with our Cyclones, were the trendy basement pick in the conference heading into the season. That’s why it is a bit surprising when I looked at the Big 12 standings today and saw K-State on top of the North. Honestly, I thought that Texas A&M would beat Kansas State by double-digits on Saturday night. Nope. The Wildcats and their “new” head coach Bill Snyder went out and hung 62 points on a not-so-good A&M defense. Is Kansas State the best team in the North? Of course not. But they’re on my winners list for being in that position at this point in the season.

Colorado – The Buffaloes finally put a positive performance together and it’s all because Dan Hawkins benched his son. Tyler Hansen actually looked decent on Saturday in Colorado’s 34-30 win over Kansas.

Texas Tech – The Red Raiders went into Lincoln and upset Nebraska 31-10. Mike Leach owns the city of Lincoln. He should look into buying property there.

Nebraska – The Huskers are on this list for obvious reasons. I can’t decide if Nebraska losing to Tech is a good or bad thing for their psyche before Iowa State comes to town. Your thoughts?

Oklahoma – The Sooners now have three losses on the year after losing to Texas and to throw salt in the wounds, they now have lost quarterback Sam Bradford for likely, the rest of the season. Somehow, the Sooners are still ranked in the top 25.

Texas A&M – Are you serious Mike Sherman? Will somebody please fire this man?

2 – Oklahoma State – The Cowboys beat Missouri 33-17 on Saturday night. That loss to Houston still has to sting for this program. They now look like the only team that can knock Texas off of their South pedestal.

3 – Texas Tech – What a huge win for Mike Leach’s program against Nebraska. They dominated that football game. I thought about moving them up to number two.

4 – Oklahoma – I realize that the Sooners are 3-3 and have now lost last year’s Heisman Trophy winner for the season. Here’s the deal though. I still feel like they are better than any team in the North. That’s why Oklahoma is number four.

5 – Nebraska – The Huskers two losses come to two pretty solid football teams. They need to figure out a way to run the football though.

6 – Kansas – Rock Chalk Jayhawk….lose to CU. Kansas’s offense is really good. It will keep them in games but I’ll be surprised if Kansas doesn’t have at least three conference losses by the end of the year, probably four.

7 – Kansas State – I can’t believe that I am actually putting this team at number seven this week. But how can I not?

8 – Iowa State – The Cyclones looked pretty good against Baylor. Injuries look to be a huge concern heading into this week though.

9 – Missouri – The Tigers played fairly well for a while in Stillwater last night. I think that they are better than the 0-2-conference mark would indicate.

10 – Colorado – This team has the ability to surprise a few people down the stretch.

11 – Texas A&M – Saturday night’s loss to Kansas State can only be described as laughable.

12 – Baylor – This team simply isn’t very good without their quarterback.