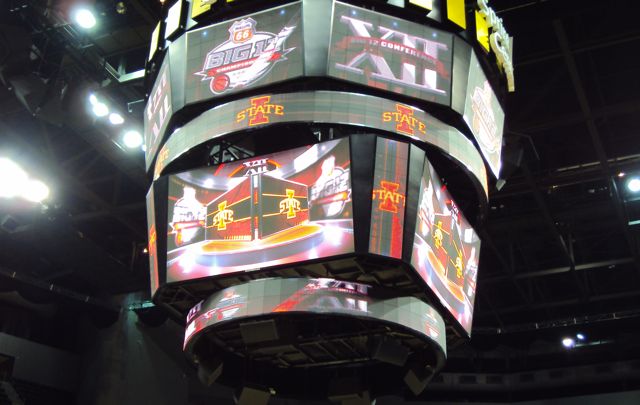 Both were picked to finish at, or near the bottom of their perspective divisions in the Big 12. Both are coming off of huge upset victories a week ago. And both are considered to be in “rebuilding” stages of their programs.

The two will tangle on Saturday afternoon in College Station.

Who will come out on top? Do to the fact that I am in the middle of moving, here’s an abbreviated version of the Breakdown.

Breaking Down the Aggies

Is there a more confusing team in the country than Texas A&M? If there is, I’d like to know about them. The Aggies were blown out by Kansas State, 62-14, just two weeks ago. That was the talk of the press box in Ames on Oct. 17.

“Is that score right?”

It was truly a debacle when Mike Sherman’s team traveled north to the Little Apple.

Then, you have what went down last week. That’s when the Aggies strutted into Lubbock and beat Texas Tech, 52-30. That’s after Texas Tech beat Kansas State (remember, they killed A&M) 66-14 on Oct. 10.

My head hurt. This all makes no sense, whatsoever.

“It was just a big relief to win, period, coming off the three-game skid that we had,” said Aggie defensive back Jordan Pugh. “And me, being a senior, you wanted that game. It was special. It was a relief, but it was more important that we got that win to get back on track.”

Okay…so now that you have some background on the Aggies, let’s take a more specific look at what your Iowa State Cyclones will see on Saturday afternoon. Unfortunately, most of you won’t be able to “see’ what the team “sees,” as the game is not on television. John Walters and Eric Heft will be sure to keep you company though.

For more on A&M’s anatomy as a football team, CLICK HERE

One certain YouTube phenomenon, bowl talk and injuries have headlined this week for the Iowa State Cyclones.

Injuries could be the key on Saturday when Iowa State rolls into College Station. Who is healthy? Who will actually play?

Like last week, it’s a toss up at this point.

I only know one thing. That’s that Iowa State absolutely has to score more than nine points to win against A&M.

Having said that, it’s hard to write off the 2009 Iowa State Cyclones because of a few injuries. Just ask Nebraska.

There are too many question marks to make me feel comfortable picking Iowa State in this game. Last week was great and Paul Rhoads proved to the nation that his teams can and will win anywhere, but I have to go with my gut and my head in this one. I just don’t think that Iowa State will win.

If they do win, it’ll be because they controlled the time of possession. In order to do that, Alexander Robinson has to play. Reggie Stephens’ injury definitely hurts. A healthy Austen Arnaud would be magnificent. But a healthy Robinson could make or break the game.

Again…question marks. This hurts, but I’ll take the Aggies.