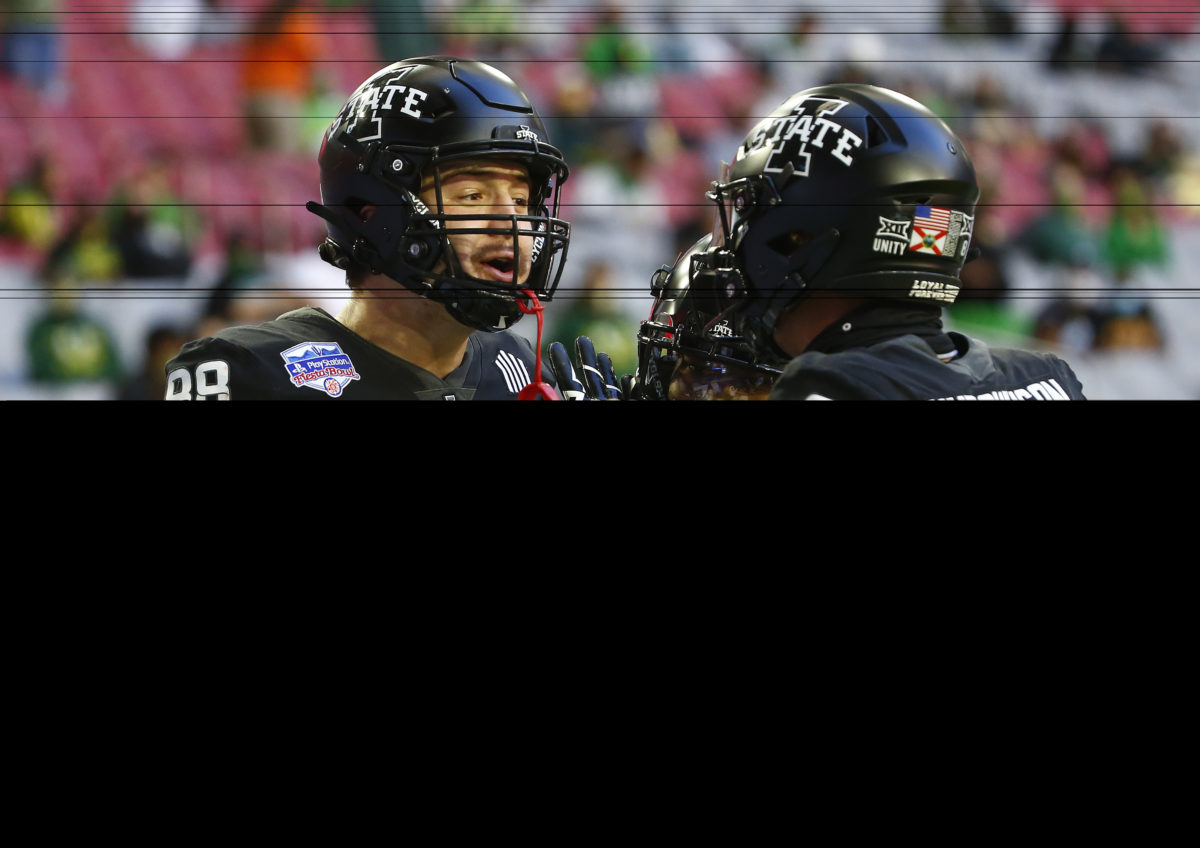 Charlie Kolar is now “shredded.” Chase Allen is rock-solid as always. The guys behind that dynamic senior duo in Iowa State’s elite tight ends room are rising stars, as well.

So how best to challenge them?

“How can I find ways for those guys to fail at certain stuff?” Mouser said.

**Kolar, a two-time All-American, turned 35 of his 44 catches last season into first downs or touchdowns. Fifteen of his grabs were successful third-down conversions. He’s as clutch as it gets — and now, Mouser said, he’s in the best shape of his life.

“He’s completely transformed his body,” Mouser said of Kolar, which reflects a trend that’s rippled through all of ISU’s top players this offseason. “He’s lost, like, 10 percent body fat. He’s one of the strongest kids on the football team right now. The guy is just shredded right now. … I’m almost embarrassed to stand next to him now. (He has) all these muscles I feel like he didn’t have before. He’s healthy. Last year it looks like he was held together — he was wrapped in all this stuff — and he is confident right now. Looks good right now. He’s moving really well right now. He’s so fluid in his movements. He’s so strong in the run-blocking piece of it. He’s light years ahead of where he was going into last season and we’re only in April right now. So I feel like the steps we could take in the next (few) months going into the season, there’s still a lot of areas that we could get better in, as crazy that sounds.”

It would sound crazy if it wasn’t the same thing being said about every returning Cyclone standout. They’re all finding ways to “fail,” which in turn spurs broader skill development. Ceilings, after all, are self-imposed. No competitor believes their development faces any limits — and ISU’s players have fully adopted that mindset no matter how accomplished and decorated their careers have been to this point.

“We’re breaking down the first details of every route he runs,” Mouser said. “Every step he takes in the run game. Everything’s getting evaluated and everything is broken down. He’s so particular with what he looks for, too. He wants to be coached. He wants to be challenged. So he had a good season last year but we still have a lot of goals for what we want to accomplish together and the growth that he can make in every area of the game.”

**Allen is a three-time second team All-Big 12 selection — and a four-time first team All-Academic honoree. He, along with Dylan Soehner, who is now preparing for a possible career in the NFL, helped transform a tight ends room that had no scholarship players when he arrived in 2016. Now the Cyclones have one of the top rooms in the country thanks largely to Allen’s leadership.

“It’s been awesome to have Chase here because you could share some of those memories (about) what that room looked like his freshman year and what it looks like now,” Mouser said. “What he himself and Soehner have done to help that room and get it to where it’s at now, and the program in general, it’s crazy to compare the two. It feels like it’s been 20 years since that (2016) season.”

Now Kolar and Allen continue to serve as prime contributors in both the pass and the run games. ISU played three tight ends often last season and expect more of the same as converted quarterback Easton Dean (6-6, 251) continues to develop and other talented younger players in the room seek to make their mark, as well.

So how best to challenge the potential third tight end?

So the answer to that question may be the same as the one posed to Kolar and Allen: Find ways to make them fail — and then, grow.

“You can’t replace Dylan Soehner, so just seeing what everyone’s good at between Easton, Tyler, Jared Rus and DeShawn Hanika,” Mouser said. “So we’ll see what they’re good at at the end of spring and at the end of the fall.”

Dean is most likely to see the most game reps among that group, but again, depth provides the Cyclones with considerable situational flexibility.

“It all depends on what we’re trying to get out of the play and who’s good in certain spots, which luckily, for myself and our team, we have some pretty good guys that can do those things,” Mouser said.