Iowa State entered halftime of Friday’s Big 12 home opener against Kansas State trailing by three and scoring just 37 points. But that all changed in the second half in the 91-69 win against the Wildcats.

After going 3-13 from the 3-point line in the first half, Iowa State went off for 54 points in the second half. That’s the same number of points Kansas State was giving up per game prior to Friday night.

“I think the biggest thing was that our kids committed to the defensive half of the floor, and hit some shots in transition a little bit,” Fennelly said. “This game is a make shot-miss shot game. Usually you can talk about how well you played when you make baskets. In the second half, we were making everything we looked at against a really good defensive team.”

A big part of Iowa State’s offensive explosion in the second half can be attributed to freshman Kylie Feuerbach.

She played one of her best games of the season and collected 11 of her 17 points in the third quarter.

“She’s a kid that can do a lot of things for our team,” Fennelly said. “That third quarter changed the game. I really believe that.”

Feuerbach’s performance is her second straight game scoring in double figures. Her career-high 17 points on Friday followed a 13-point performance against UNI.

She gives credit to the intensity that Big 12 basketball brings.

“Everyone really contributed,” Feuerbach said. “Each game is pretty high in intensity, but I guess each Big 12 game brings it a little more. We wanted to be 2-0 in the Big 12 before Christmas break and I think having that mentality going in – everyone was ready for it.”

The Cyclones also saw the return of Maggie Espenmiller-McGraw on Friday – a sophomore that was expected to be out until after Christmas due to an ankle injury.

She only had three points in the first half, but she scored 11 of the Cyclones’ points in the second half to finish with 14 in her return to the court.

“It was really nice (to get out there),” Espenmiller-McGraw said. “I didn’t really know I was going to play until two days ago, but it was really fun to be back at Hilton again.”

Iowa State made some last minute adjustments to get Espenmiller-McGraw on the floor on Friday.

As for the upperclassmen on Friday, Kristin Scott and Ashley Joens carried the torch once again.

Scott finished the night with her best shooting performance of the year, using a 5-6 night from the 3-point line and a pair of free throws to finish with 17 points.

Joens, meanwhile, put her head down following a 6-point game in Cedar Falls three days ago.

The junior star collected seven rebounds and finished with 25 points.

“No, I’m not surprised,” Fennelly said after the game. “Ash is Ash. We wouldn’t trade her for anyone. She’s maybe the best all-around player in the country.”

The Cyclones welcome in-state rival Drake to Hilton on Tuesday. 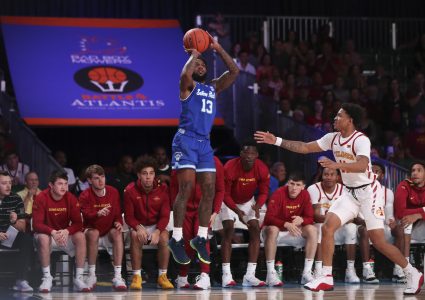