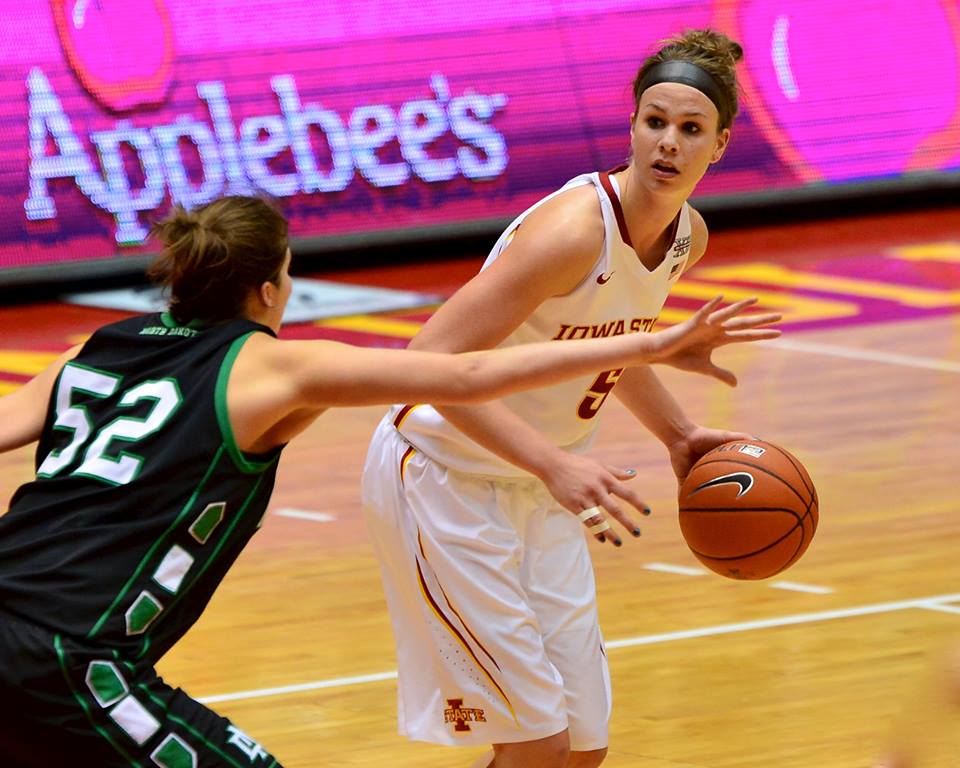 AMES –Hallie Christofferson can shoulder a heavy workload, but it’d be ok with her if her Iowa State teammates carried their fair share too.

The Cyclones win-loss record this season will depend on it.

On Wednesday, Iowa State (2-0) got key contributions from Brynn Williamson and Nikki Moody to top a pesky South Dakota squad, 88-72. The Lady Coyotes hung around for much of the game until the 22-ranked Cyclones put it away late.

“This is a team effort tonight.”

It’s clear Christofferson is option No. 1 and 2 offensively for Iowa State. The senior’s versatility creates mismatches all over the floor, but when Christofferson isn’t at her best, it’s imperative her teammates make shots.

Christofferson finished with 25 points and 12 rebounds, but she shot just 7-of-21 from the floor. The Hamlin native’s teammates were there to help.

“On a night when Hallie wasn’t making shots, we found a way to win,” Iowa State coach Bill Fennelly said.

Trailing 48-44 in the second half, Iowa State’s “complimentary” pieces went to work. Moody drilled a 3-pointer for a 49-48 lead. Seanna Johnson and Maddy Baier both scored in the lane to make it 53-50.

Minutes later, Williamson’s tough rebound and put back pushed the advantage to 61-57. When Kidd Blaskowsky swished a trey from the right corner, the game was all but over at 70-60.

“Coach Fennelly said it well, at one point we were all looking for Hallie to score 32 points again,” Williamson said. “You have to realize that’s going to happen. We are going to play Big 12 teams, and they might shut her out, she might not have a point all night. There’s four other girls on the court that have to step up.”

When Fennelly pens his game plan, Hallie Christofferson is always at the top of his list to get looks. Every opponent on Iowa State’s schedule knows that.

If Christofferson’s teammates can produce like Wednesday, the Cyclones should be punching their ticket to an eighth-straight NCAA Tournament.

While Hallie Christofferson is the star, it’s easy to see Nikki Moody runs the show. Moody was in complete control on Wednesday, scoring 20 points to go with seven assists and four rebounds.

“It was a quiet 20,” Christofferson said. “She’s always going to handle the ball well. She did that tonight.”

In her junior season, it appears the game has slowed down for Moody. The Euless, Texas native dictated the pace all night and didn’t force anything when a play wasn’t open.

It’s all part of her maturation as a point guard, which comes at a great time for Iowa State. Perhaps no Cyclones player will benefit more from the increased emphasis on hand checking fouls than Moody. As Fennelly said after the game, she’s hard for defenders to keep in front.

“When Nikki gets into the gut of the defense, then you’ve got Hallie over there, Kidd, Brynn, that’s how we are going to have to score. I thought tonight, she was really good at it.”

Iowa State turned the ball over just seven times against the Lady Coyotes.

“Seven turnovers against anyone is really good, and one the whole second half, I think,” Fennelly said. “A lot of that is Nikki making sure we have the ball in the right spots.”

Bill Fennelly on the technical foul called on a South Dakota player for pushing Brynn Williamson. The score was tied 57-57 at the time.

“I think the technical foul changed the game, I really do. For whatever reason, it relaxed Hallie. It got Brynn a little excited.”

–       Iowa State forced 16 Lady Coyotes turnovers against just seven turnovers of its own.

–       Hallie Christofferson notched her 16th-career game of scoring 20 points or more. Nikki Moody’s 20-point effort was the third of her career.