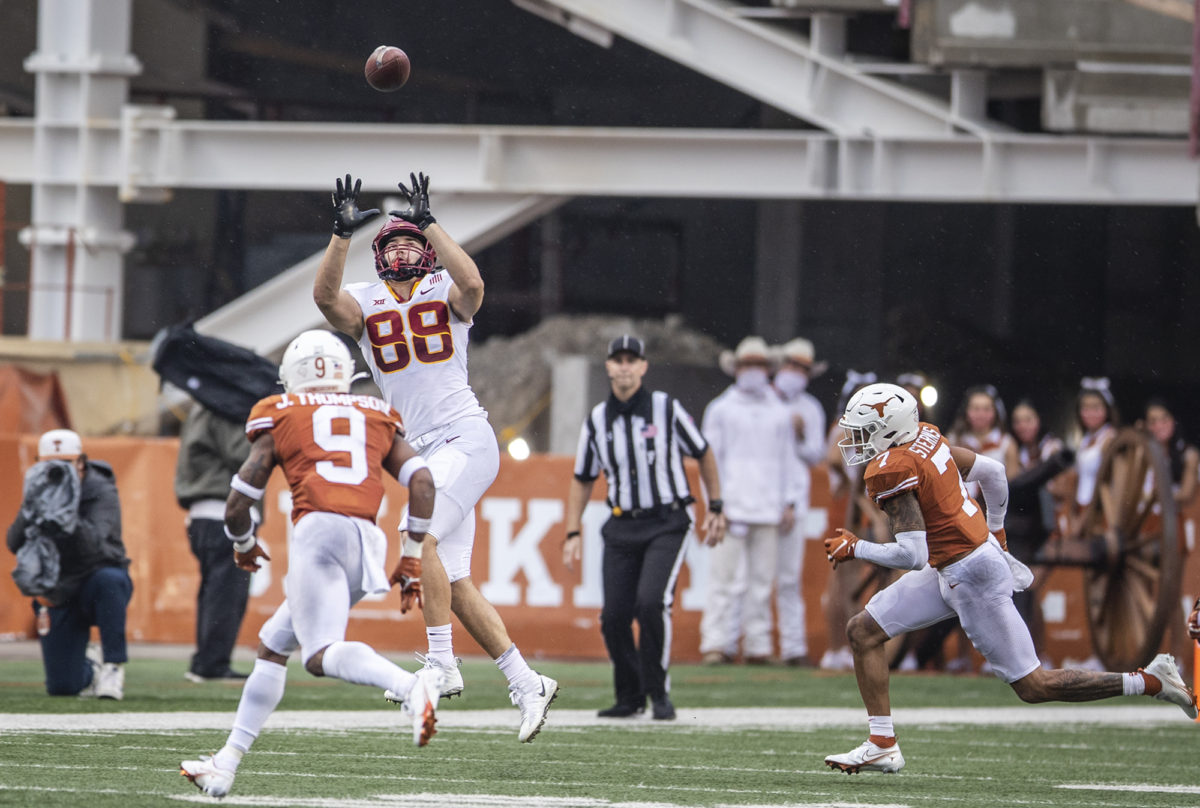 Sometimes, a couple items buried in the game notes stops you — or me, anyway.

2 — “Built a Lego replica of Jack Trice Stadium during quarantine.”

One of the most interesting, intelligent and productive tight ends in Cyclone history, that’s who. A junior from Norman, Okla., who never got an offer from his hometown Sooners. A record-setting Cyclone who now has a chance to do something — wait, two things — no other ISU player has done:

Kolar — who has a tight end-specific school-record 95 receptions and a record-tying 15 touchdown grabs — was asked this week why he chose to trust in Cyclone head coach Matt Campbell’s vision and come to Ames.

“I believed the plan they had and the culture they were trying to create, you know, it sounded different from a lot of other places,” said Kolar, the first ISU player in program history to attain both first-team All-America and Academic All-America status. “And also, no one wanted me, so that made it easy, too.”

Kolar’s always quick with a joke and it’s often a self-effacing barb. The humor doesn’t mask but instead melds with an elite competitive spirit. There’s a chip on his shoulder and “prove it” is a two-word phrase taken to heart and carried onto the field — no more this Saturday than the past 35.

And Kolar has been the same player throughout his meteoric rise in the program.

Campbell said this week that standout junior quarterback Brock Purdy’s career trajectory foreshadowed and tracked alongside that of his program. The same could be said of Kolar, who is often referred to as “a security blanket” for Purdy. Kolar’s started or played in all but one game in his nearly three-season career: the season-opening loss to Louisiana, which he missed because of offseason hernia surgery.

“When you get to know Charlie, he is the elite competitor — he’s gotten one A- in our engineering school,” said Campbell, whose team has won two of the past four meetings with OU after breaking an 18-game skid in the series. “The biggest thing for Charlie, as competitive as he is, is confidence. Charlie knows that he’s a really good player and he knew he wanted to be a really good player. But his growth has been in the detail and the strength in his confidence in his route running. It was a confidence of, ‘Not only can I do this, but I can be really good at doing this.’ That’s probably grown the most during his time with us. It has been a great joy to watch his career progress, really in every facet.”

So Kolar was wanted. Now he’s treasured. Trust and belief have formed mutually beneficial bonds to open up undreamed of opportunities on the football field and beyond.

Brick by brick, Kolar’s hands have been occupied. Brick by brick, the project’s become bigger, more prominent. And brick by brick, a chance for ISU’s first football championship in 108 years has finally materialized.

That’s quite the feat of engineering — and emblematic of unwavering adherence to the shared instruction manual.

“The thing about football is there’s so few games and there’s so few opportunities,” Kolar said. “They talk about the precision, the detail is the difference between winning and losing. And the only way you can have precision and detail when you’re playing is if you have detail stuff in the rest of your life. So that bleeds into everything in our program. We don’t accept tardiness in the program. You’re on time or you’re not practicing that day. It doesn’t matter who it is. When you show up for weight training and lifting, if they tell you to do 10 reps and you do nine, that’s unacceptable. If they tell you to do 10, do 11. It’s about everything you do from the moment you step into this building. You know, focus and detail — and then that bleeds over to practice detail. Running the route at the right depth. Blocking the right gap. Making the right tackle.

“It can get infuriating sometimes if you think about this as meaningless or this is so mundane, but the thing is is that stuff bleeds into the games and that’s what separates the difference between a seven-point win from a seven-point loss. I think that’s the culture that Campbell sets from the top and then everybody below him follows. I think it’s really, really hard but it’s one thing that sets apart teams that win games and (don’t) lose games.”