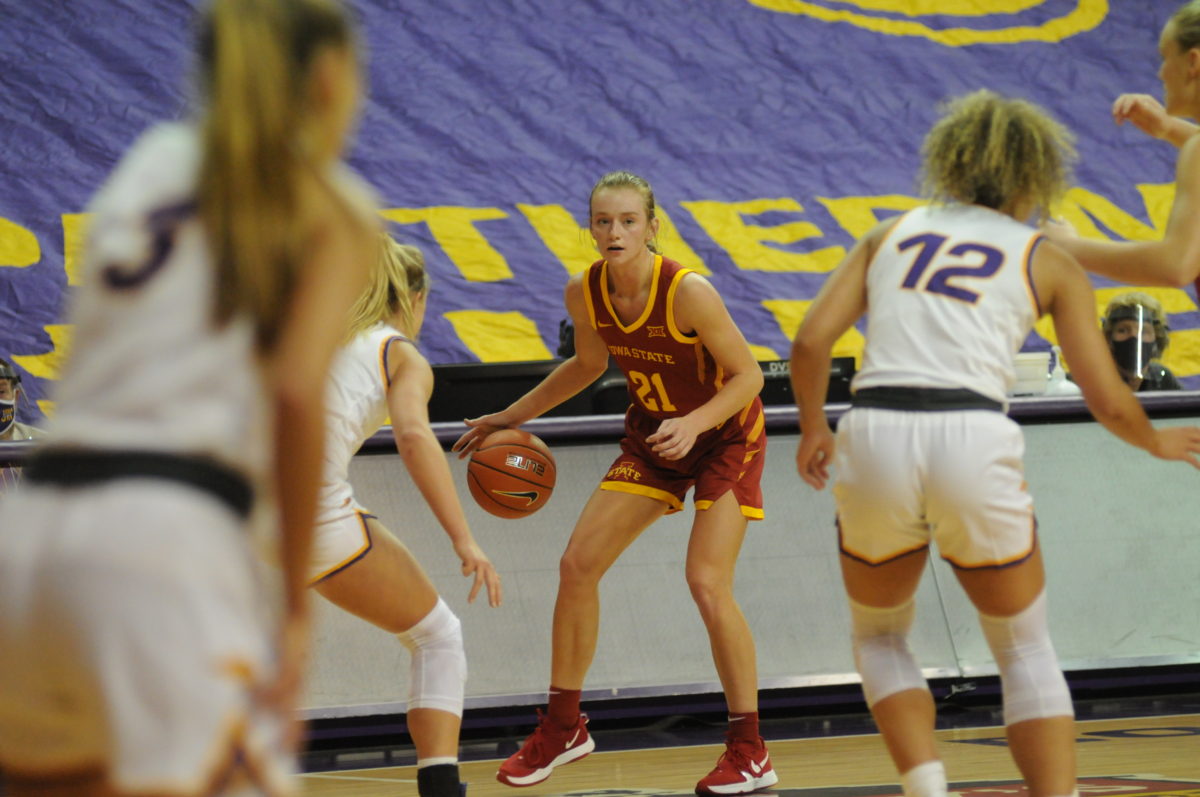 Early on, it was just Ashley Joens. A week ago, it was Lexi Donarski.

On Tuesday against UNI, though, it was a team effort.

The Iowa State women’s basketball team struggled early on to find offensive balance. The offense was relying largely on Joens, who has scored 100 more points than the team’s next leading scorer.

But the Cyclones found something in Cedar Falls. Joens got into foul trouble and lost 13 minutes of playing time in the first half. She finished the game with just six points. The rest of the team responded.

“I think that me, along with all of the other freshman each game, are continuing to get more confident,” Donarski, a freshman who has led the Cyclones in scoring each of the past two games, said. “We’re getting in the flow of the game even more. It’s obviously a big transition from high school to college, so we knew it would take some time, but I think that we’ve all taken steps forward with each game.”

The Cyclones hope to maintain that offensive balance against Kansas State on Friday (6:00 p.m. ESPN+). It’s the second Big 12 game of the year and first conference game at Hilton Coliseum.

“I think (another conference win) would be huge,” Iowa State coach Bill Fennelly said. “Obviously, this is a year where every game you can get in this league is a good one. You know you’re playing everyone twice – to lose a home game or win a road game – that starts to add up.”

Kansas State comes into the game having not yet played a Big 12 game, though the squad is 5-2 overall on the year.

It’s been up-and-down for the Wildcats. The team lost to Idaho State at home earlier this month. However, they also defeated No. 21 South Dakota State a week ago.

“K-State is a team that’s playing at a very high level,” Fennelly said of his team’s next opponent. “They have one of the best players in the league in Ayoka Lee. They tempo the game and they’re very well coached.”

At 6-foot-6, Lee leads the team in points per game and rebounds, despite playing two less games than everybody else.

She will likely be paired with 6-foot-2-inch forward Laura Macke in an effort to stop the Cyclones offense.

“I think going into K-State, (physicality) is going to be big,” Iowa State freshman Kylie Feuerbach said. “They have some big girls, so I think they are going to be helping a lot. I like to drive to the basket a lot and against UNI and we’re hoping to do that a little more.”

Feuerbach is one of the freshmen that has stepped her game up for Iowa State and a big reason why the team got past UNI on Tuesday night.

In her past three games, the Sycamore, Illinois native is averaging 10.0 points per game.

“For us it’s about continuing to get better,” Fennelly said. Our team is playing really, really hard. I have no qualms with that. Our execution has got to get better. We’ve got to do the little things – follow the scouting reports and run our offense – all the things that every coach complains about. We told them (at the start of the season), ‘We’re not going to coach your effort. We aren’t going to coach your level of enthusiasm.’ We haven’t had to.”

“The next step for us to be a better team and be the best version of our own self is executing things from play-to-play, day-to-day, and game-to-game,” Fennelly said. “I think we’ve shown that we’re capable and hopefully tomorrow night, that progression happens.”