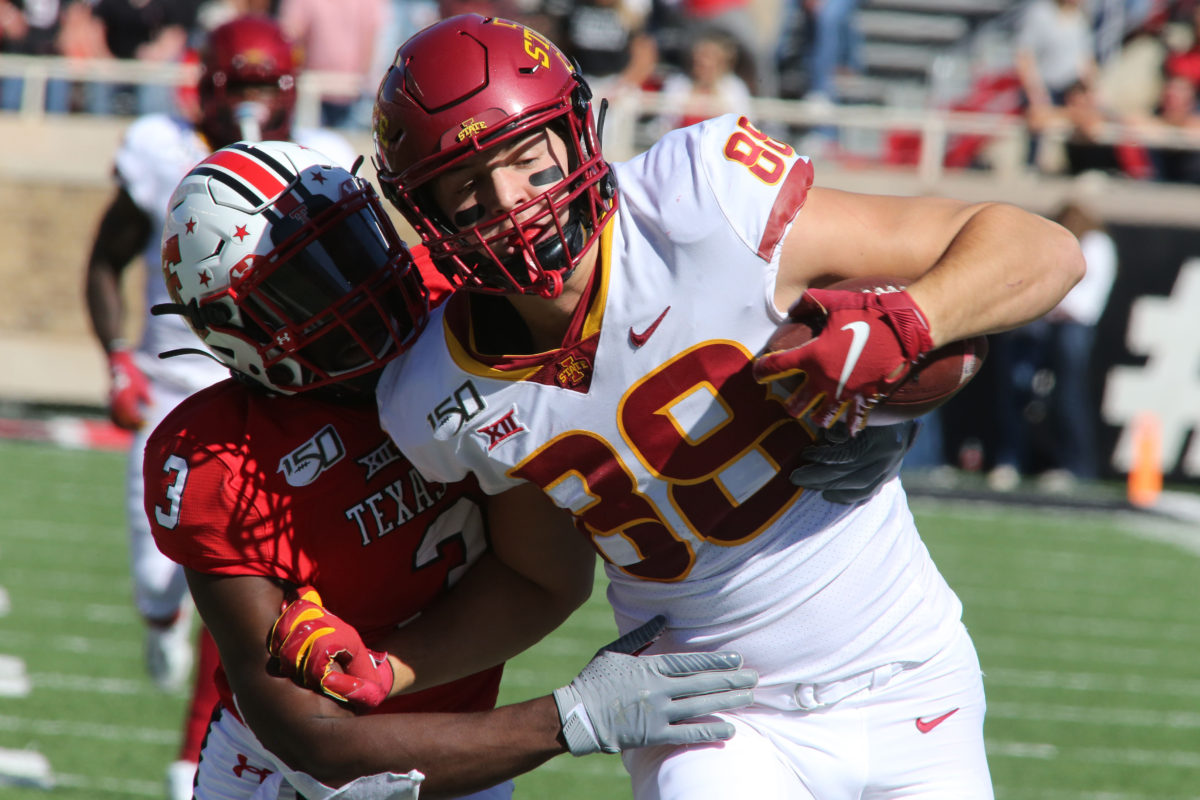 There’s a prime reason Iowa State football coach Matt Campbell stresses consistency above all else in his program.

He diligently practices what he preaches.

So when Campbell was recruiting future star tight end, Charlie Kolar, over four years ago, he presented a vision that soared above the Cyclones’ recently forlorn fortunes.

Kolar — an All-American as a junior last season — was all in. And he can even joke about it now as that vision has morphed into a consistenly winning culture.

“The good thing about Campbell is if you miss his message once, you’ll get it again the next 10 weeks,” Kolar said. “I’m just kidding. The truth is, it was a leap of faith because when I committed we were 3-9 the year before. It was a big step and I believed in what he was saying — not just him but all the coaches echo and resound the image and message that he sends out. I believed and had faith in what they were talking about and clearly they know what they’re doing. It was a good leap.”

Kolar’s return to good health recently has augmented success in both the rushing and passing games for the Cyclones (2-1, 2-0 Big 12), who strive to notch a third straight conference win Saturday at 2:30 p.m. (ABC) against Texas Tech (1-2, 0-2) at Jack Trice Stadium.

The Red Raiders are 13-point underdogs but have at least glimpsed a turn of the corner in year two under head coach Matt Wells.

Tech blew a late 15-point lead in their Big 12 season-opener against Texas, falling 63-56 in overtime. The Red Raiders followed that performance up with a 31-21 loss at conference co-leader Kansas State — but scored 21 unanswered points to briefly lead 21-17.

So that 0-2 mark in league play masks improvements for Wells’s team on both sides of the ball, but particularly in the running game, where Tech averages five yards per carry.

“I think what you can see — and I measure teams by when you turn the videotape on, are they getting better week in and week out — and I think that’s the one thing that is blatantly evident when you watch Texas Tech,” Campbell said. “They’re a really good football team. The core values of running the football, your defense running to the ball and playing really good on special teams, they live that. Now, they’ve had some young guys who I think are starting to really gain great confidence and you see a team that’s really coming right now. I’ve got a lot of respect, number one, for this Texas Tech team, but I’ve got a lot of respect for Matt Wells, as well. You can see them on the (brink) of excellence.”

The Cyclones, who are in a three-way tie atop the conference standings with Kansas State and Oklahoma State, aim to arrest that development on Saturday — and Kolar’s growing role in quarterback Brock Purdy’s offense will be key to avoiding an upset.

He’s caught short passes that help loosen things up for standout tailback Breece Hall and stretched the field a bit last week in a 37-30 upset of then-No. 18 Oklahoma.

“To get Charlie back — a guy that’s been dependable, understands in critical moments where to be, for anybody that’s huge and especially for a quarterback,” Campbell said. “For a quarterback, when all of your receivers are brand new in brand new spots, I think Charlie was really big for Brock to just steady the ship.”

The Red Raiders’ two-deep in the secondary features four players at corner and safety 6-0 and taller, but the defense is allowing 42.3 points per game, which ranks ninth in the Big 12.

Cue Kolar, who is tied for second all-time among ISU tight ends in touchdown catches with 10 but seeks his first one this season on Saturday.

Sprinkle in Hall and emerging big-play receiver Xavier Hutchinson and Tech may have a hard time slowing down the Cyclones’ diverse offensive attack.

“The offensive line has been playing pretty well — the receivers, tight ends, quarterback — we’re all coming together,” Kolar said. “The best part about the offense is we don’t have a lot of selfish guys. The offense cares about one thing and that’s putting the ball in the end zone. It doesn’t matter if it’s the running backs, receivers, Brock or the tight ends. That’s a key part of it. It’s a blessing that we have so much talent throughout the offense because the defense can’t key in on one guy. I’m blessed to be a part of it and do my small part.”

So modest. The reality: Kolar’s role in the offense — and in the locker room — is huge.

But it’s not about him. Not to him, anyway. That’s why he fully bought into Campbell’s vision four years ago and it’s also why he’s stoked about what the Cyclones may achieve this season if they can approach and possibly match Campbell’s personal benchmark of consistency.

“If you took Campbell’s message after a loss and after a win, you couldn’t tell the difference,” Kolar said. “Both times he says stuff about how we need to get better. After the OU win, he was like, ‘It was a great win but still, we have to come back the next week.’ It felt like we won the game, but it also felt like we lost the game, so I’m ready to go (this) week.”