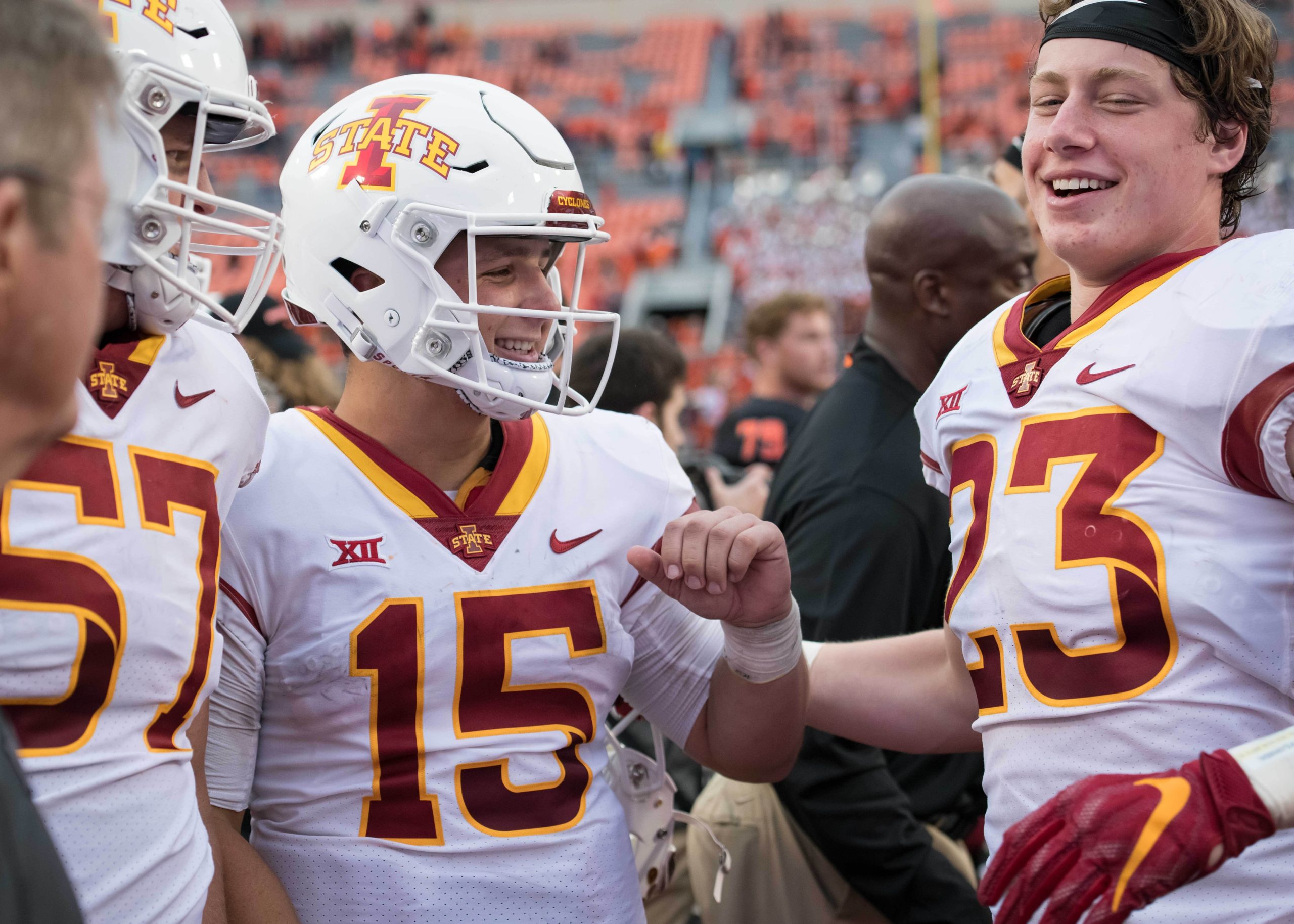 A calm settled over Brock Purdy two years ago when he made his Big 12 debut at Oklahoma State.

A city named Stillwater proved to be the perfect diving-in point for the then-relatively unknown Iowa State quarterback who, of course, made his first big splash of a record-setting career by rallying the Cyclones to a 48-42 win over the Oklahoma State Cowboys.

Purdy knew he would play. He also knew he’d attack his first major college action with alacrity, not anxiety.

“To be honest, I was not nervous,” said Purdy, who returns to the site of his breakthrough in Saturday’s 2:30 p.m. (Fox) matchup between the No. 17 Cyclones (3-1, 3-0) and the No. 7 Cowboys (3-0, 2-0). “I was more excited than anything. I think the games leading up to that point, I was preparing, just in case anything happened to the starter. And then for that game when coach (Matt Campbell) told me, ‘Hey you’re gonna play in the game,’ I was really excited. I was like, ‘OK, I’m gonna show my teammates and everybody what I’m about,’ and just do my thing and go play football.”

That, Purdy did with aplomb.

He completed 18 of 23 passes for 318 yards and four touchdowns. He also rushed 19 times for 84 yards and a score — including a high-stepping 29-yard jaunt into the end zone.

“That was a fun one,” said ISU center Colin Newell, who was a redshirt freshman that season. “Obviously I remember the ‘swagger step’ into the end zone. Everyone was pretty excited about that, but there were many other plays he made that day. … That’s how he started out when he came here and he continues to get better and better and keep that same mindset in every way.”

And despite his legendary start, Purdy’s only concerned about how he finishes — this season and his Cyclone career.

He’s been a focal point of defensive game plans ever since that dynamic debut and, at times, admits to putting too much pressure on himself, especially last season.

“Yeah, I think in the first game (this season, a loss to Lousiana) I sort of felt it a little bit, just when things weren’t going our way and I felt like I had to do it on my own,” Purdy said. “But I’m at the point where I know everyone on the field that is playing with me has the capability of doing their part and then if I just trust in that, then we’ll be good to go. And then trusting the coaches’ play-calling and trusting the defense and special teams to do their part, just trusting the team. So I feel like each game I’ve gotten better with it. I think other guys on the team have gotten better with it, as well. It’s not just me that’s going through this kind of stuff. I think just as a whole, we’ve all grown and I’m really excited to see what happens down the stretch the season and everything as we continue to just keep building off of the games in the past and all of our experiences.”

That “stuff” that Purdy alluded to translates into high expectations — and ISU has met them particularly well in the month of October. The Cyclones are 12-1 in these 31 days since 2017, but haven’t always carried that momentum into the decisive month of November when important “big stage” games such as this one against the Cowboys often loom.

“Can we continue to grow through the entirety of a season?” Campbell said. “That’s still a really big challenge for our program and it’s something we haven’t done here, yet. It’s going to take great leadership from our coaches and obviously our senior leadership to be able to forge forward and continue to get better as the season goes on.”

And as Campbell noted, this “big game” comes pretty early in the season.

Oklahoma State hasn’t played for almost three weeks because of a bye week followed by a postponement last week triggered by COVID-19 concerns at Baylor.

The Cyclones are coming off their second bye week of the season and treated it as a fundamentals-based boot camp. That nuts-and-bolts approach also helps tamp down the inevitable hype that stems from two of the conference’s three unbeaten teams squaring off in a top-20 battle.

“The mood’s been the same ever since the season started,” ISU senior safety Lawrence White said. “We’re constantly finding ways to better ourselves and better this team. We’re continuing to work on being precise in the game and not really beating ourselves.”

Calm is required. Pressure flows evenly, not sporadically, from within.

Purdy’s navigated these sometimes still, but often choppy waters, throughout his career — and his strong and steady hand is firmly on the rudder as Saturday’s game swings into view.

“Brock’s greatest growth is his experience and understanding the highs and lows that come with playing the quarterback position,” Campbell said. “At this level, there’s so much expectation and demand on him being his best — or what’s perceived as his best — all the time. It takes both a physical and an emotional toll to play quarterback and play quarterback for a great length of time at this level. Brock is certainly a young man that’s taken all of his experiences and continued to grow, both as a football player and as a leader within our football program. A lot of growth has occurred over the last two years.”

Hopefully with more to come.

“I understand people try to break down my game and what I do good, (and) what I don’t do good and defensive coordinators attack certain tendencies that I have,” Purdy said. “I understand that and I think that’s something I’m always just going to have to continue to grow with and be better at, but I just feel like I’m still the same kind of guy, 2018 until now.”

“I think Trevor’s more of looking here a couple weeks down the road for his (possible) availability to be back and ready to go,” Campbell said. “Tarique (is) more in that week-to-week situation and I think Tarique, we’lll probably have a really good idea of getting back out on the practice field today (seeing) where he’s at and what his availability would be for Saturday. But like I said, Trevor will not be available this weekend. It will be a little bit more down the road towards the end of the season.”

Darrell Simmons has stepped in and played well in Downing’s lengthy absence. Jake Remsburg made big contributions when Ramos got hurt two weeks ago in a 31-15 win over Texas Tech.

“Between Darrell and now Jake Remsburg, they’ve done a great job of stepping in and filling in those spots for us,” center Colin Newell said. “They’re playing really confidently and they’re great in the film room. Every week we continue to get better and a lot of that is those young guys stepping up into those positions.”

Iowa State’s dynamic freshman safety Isheem Young will miss the first half of Saturday’s game, as expected, after being whistled for targeting in the second half of the 31-15 win over Texas Tech. NCAA rules dictate that any player assessed a targeting penalty in the second half will be immediately ejected and forced to sit out the first 30 minutes of the next game.

“Our commissioner and his staff do a really good job of communicating,” Campbell said. “They looked at it after the game and he will not be able to play in the first half of the game. Those are things we have to continue to coach through and work through. Isheem is a very good player, but we’ve had a lot of guys play at that middle safety spot. We’ll be excited once he’s able to come back in the game but Arnold Azunna has done a phenomenal job and Greg Eisworth has done a phenomenal job. We’re fortunate that we have a lot of guys who can play and we’ll pick up the pieces and continue to move forward and look forward to regaining Isheem in the second half.”

“That’s a hard decision when a school in your home state kind of comes in on you in the recruiting process. It says a lot about who Charlie is. At that time, he had a brother that was at Oklahoma State as well. There was personal meaning toward getting that scholarship offer. It takes a lot of courage to stay home and stay committed to us. I really appreciate his courage and we’re really grateful that he did make that decision because he’s certainly been a big pillar of us continuing to grow as a program. We really appreciate who he is, both on and off the field.” — Matt Campbell on Charlie Kolar