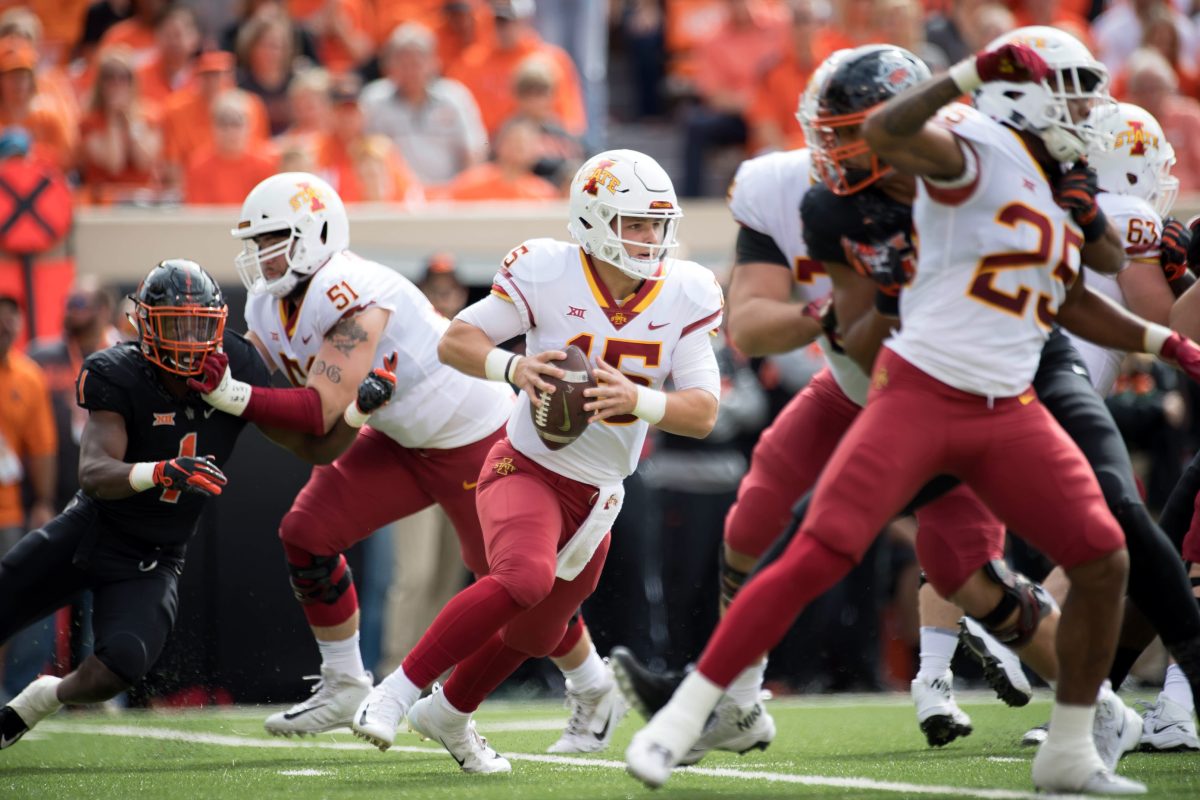 But Saturday, true freshman quarterback Brock Purdy strode confidently into the glare of the spotlight, delivering a bright, shining performance for the ages.

The Cyclones’ backup (for now) dual-threat play-caller simply starred in his first real game action Saturday at No. 25 Oklahoma State, throwing for four touchdowns and rushing for one in his team’s pulse-pounding 48-42 upset win in Stillwater — ISU’s first triumph there in 18 years.

“What I love about Brock is the moment’s never been too big, even from the first day he’s gotten on campus,” Campbell said on the Cyclone Radio Network postgame show. “You can tell he’s on a mission.”

The Cyclones (2-3, 1-2 Big 12) brimmed with it on a Saturday during which All-American tailback David Montgomery (arm injury) missed a game for the first time ever and the Cowboys (4-2, 1-2) surged to an early lead and bounced back again and again after ISU seemed to assume full control.

Purdy was magnificent, resurrecting a long-struggling offense with a cavalcade of clutch runs and eye-popping throws.

“He balled hard,” said ISU receiver Hakeem Butler, who corralled Oklahoma State’s last-gasp onside kick attempt and caught a touchdown pass. “I think he ran over two defenders to get a first down. I said, ‘Man, he’s a baller.’ There’s really not much else you can say. Some people are just good at football.”

Purdy replaced former backup-turned-starter Zeb Noland after one three-and-out series and boosted ISU to a 30-21 halftime lead. Purdy’s final stats: 18 of 23, 318 yards four touchdowns and one pick. He also helped revive the Cyclones’ running game in Montgomery’s absence, darting for a team-high 84 yards that included both a fourth down scramble and a touchdown jaunt.

Six different players scored touchdowns for ISU, which notched its third straight win over a top-25 team on the road.

“I think that’s the one thing I really enjoy about this team right now, is you see that it is a team,” Campbell said. “I think if not, we probably would have implded a long time ago and this wouldn’t be happening. But these kids believe. They believe in each other and that part’s really powerful.”

The Cyclones’ defense also stood tall — despite giving up big plays against an offense designed to produce a slew of them.

The Cyclones struck for a staggering seven sacks and 16 tackles for loss while containing star back Justice Hill most of the game.

But adversity would thwack ISU repeatedly in the fourth quarter (as usual).

First, the Cyclones would answer Purdy’s lone interception at the OSU nine-yard line with a strip-sack on a blitz by cornerback Brian Peavy recovered by Marcel Spears.

ISU had to settle for a Connor Assalley field goal — and a 40-28 lead — though, in part because an apparent targeting penalty was ruled to be clean by officials.

Then after an Oklahoma State three-and-out, ISU safety De’Monte Ruth made contact with the punt, which set up a Hill touchdown that narrowed the gap to 40-35 with 10:25 left.

A deep 60-yard dagger from Purdy to Tarique Milton, instead — and an odd two-point conversion that even more oddly was ruled to be an incomplete pass on the field.

So, yes, a deep breath — and a review that correctly overturned the call on the field.

Oklahoma State would get within 48-2 with 56 seconds left, but the Cowboys’ onside kick was thwarted by Butler and the Cyclones would finally notch their first conference win of the season — in typical topsy-turvy fashion.

“He kicked a perfect ball, honestly,” Butler said of OSU’s onside kick try. “I just had to go get it.”

The game started grimly, with thunderstorms threatening to cause delays that never materialized.

ISU went three-and-out in its opening possession, losing 10 yards on a sack in the process.

Oklahoma State immediately pounced, turning a 48-yard run by  Cornelius on third and three into an eventual touchdown catch by Jelani Woods that made the score 7-0 with 11:03 left in the first quarter.

It couldn’t have been a worse start — but the Cyclones’ defense would provide a mood and scoreboard-altering answer.

A false start penalty set the stage for a stuff of star back Justice Hill for a four-yard loss. Then on third down, ISU linebacker O’Rien Vance streamed in to sack Cornelius for a loss of nine.

The snap eluded OSU punter Zach Sinor and the football tumbled through the end zone. The defense had the Cyclones on the board, down 7-2.

Momentum gathered from there. Purdy quickly provided a spark.

Make that a lightning bolt.

Purdy completed a first down pass to tight end/H-back Sam Seonbuchner that spanned 16 yards.  A Purdy run, combined with two slashing rushes by Kene Nwangu, positioned ISU at the Cowboys’ 32.

Two plays later, Purdy threw his first career touchdown pass — a 21-yard strike to Butler, who adroitly plunked a foot down in bounds while hauling in the throw to put the Cyclones up, 9-7.

Purdy — and the more diverse offense — wasn’t slowed much after that and ISU wouldn’t trail again, though it didn’t really feel that way.

The defense forced another three-and-out and Purdy drove the Cyclones 62 yards on eight plays to score again on his 29-yard run with 12:37 left in the half.

Purdy completed his first seven career passes. He rushed six times for 63 yards in the first half alone as ISU built a 23-14 lead that lasted until near halftime.

The Cyclones’ bugaboos with third-down defense cropped up again and Cornelius then found Tyron Johnson for a 28-yard touchdown that made the score 23-21 with 2:21 left in the half.

Oh no? Not quite.

Just another “Oh, my!” moment coming from Purdy, who drove the Cyclones to the 26-yard line before finding  Matt Eaton in the end zone on a third-and-nine play to restore a nine-point lead with 21 seconds left.

To put that in perspective: the Cyclones hadn’t scored 30 points in a full game since the heartbreaking and controversial 49-42 loss to the Cowboys last November 11 at home.

It’s also the fourth-most points scored in a single half on the road in program history, but all that would matter little if the second-half performance didn’t at least mirror the first.

Now the Cyclones turn the page to a game week that will culminate in a Saturday 6 p.m. showdown with the Big 12’s lone remaining unbeaten team: No. 10 West Virginia.

“I think this was big for this team, but we’ll only make it big if we can handle it, understand it and continue to get better and prepare ourselves for nest week,” Campbell said.

*****Lewis is the first ISU player to record interceptions in three straight weeks since A.J. Klein of the New Orlean Saints did it in 2010.