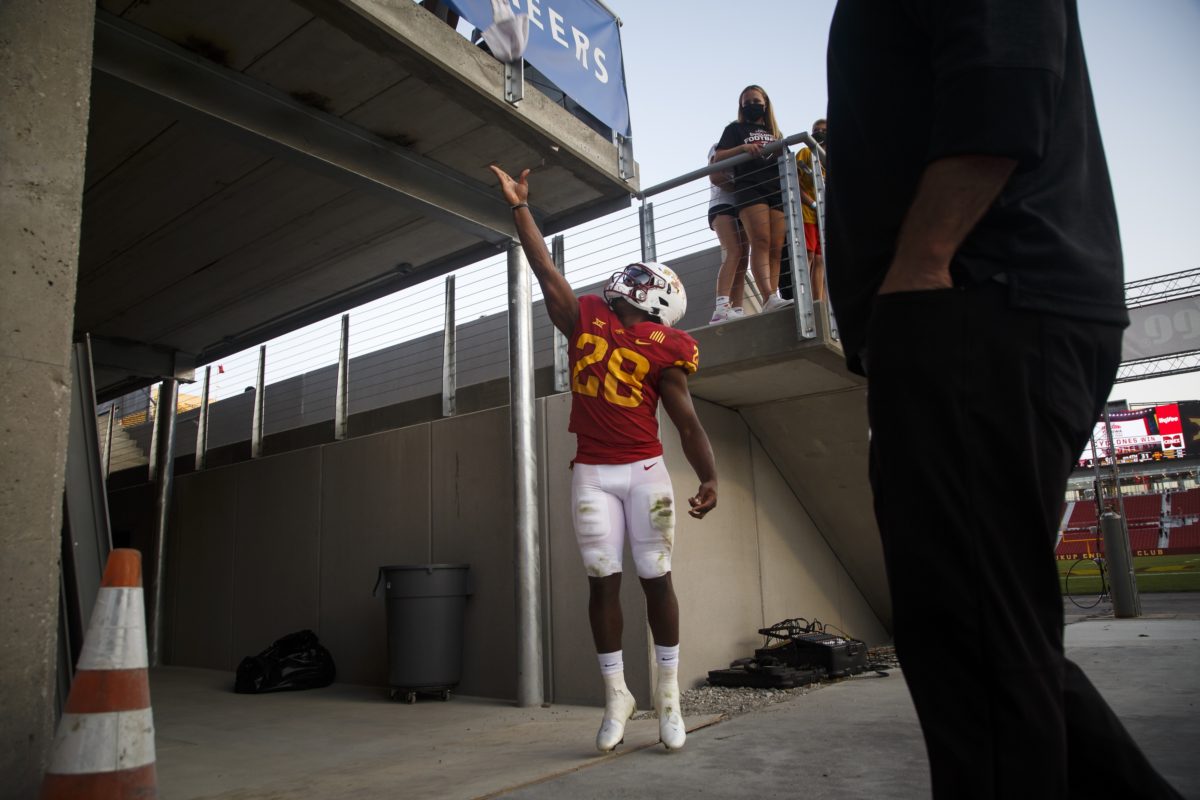 In short, his — and the team’s performance — was good, but not good enough.

Hall carried the ball 27 times for 135 yards and two touchdowns in the breezy triumph but highlighted the Cyclones’ shortcomings — not their successes — in the postgame news conference.

“I think we played OK,” said Hall, who has eight rushing touchdowns this season, which pending other late results leads the nation. “I don’t think we played our best game. I think a couple times we stalled. We still had some mental mistakes and stuff like that — some missed blitz pickups and stuff like that. We still have room for improvement, but I’m happy we got the ‘W.’”

Yeah, so is everyone associated with cardinal and gold.

A crowd of 13,502 watched the Cyclones (3-1, 3-0 Big 12) dismantle the Red Raiders in every phase except special teams in a satisfying win that was not as close as the final score indicates.

The domineering performance starts with the defense, which limited the nation’s ninth-most prolific offense to 97 yards of total offense until the fourth quarter.

It also hinged on Hall’s tough, patient, flashy and efficient running. He’s the first ISU back since the late Ennis Haywood (2000) to rush for 100 or more yards in four straight games to start the season.

“Last week we took a huge step forward on offense and I think we carried that positive growth into this week,” said Campbell, whose team is now 12-1 in October since the 2017 season. “I thought we did a really good job of dictating the pace of the game and I think the credit has to go to (quarterback) Brock (Purdy) engineering and managing the offense. We were really efficient on third down. Coach Manning is continuing to do a really good job of putting our kids in position to be successful. We have good coaches on that offensive staff that make sure those little things occur in a positive way.”

Hall was a workhorse, as usual, but Kene Nwangwu added seven rushes for 42 yards and Jirehl Brock twisted for two yards on a critical fourth down conversion in his first carry of the season.

Starting offensive lineman Trevor Downing (lower-body injury) and receiver Tarique Milton (upper-body injury) were in street clothes for Saturday’s game. Downing hasn’t played since suffering an apparent leg injury in the season-opening loss to Louisiana. Milton got banged up in last week’s win over Oklahoma and had his arm in a sling.

“I think Trevor is still gonna be out here for a little while,” he said. “We’re hoping that we can get him back sometime this season for our team.”

Milton — one of ISU’s most speedy receivers — may be out a while, too.

“I think he’ll be out for a little while,” Campbell said. “He got dinged up on that long catch against Oklahoma. I feel for Tarique a little bit. He was battling some injuries early in the season, he came back, had a big play and then gets dinged again. What I love about Tarique is he’s really tough — mentally tough and physically tough. We’ll see how this week goes and maybe we’ll get a better prognosis of when and how we’ll get him back.”

“His work ethic, his consistency — Jake’s gonna have a chance to be a really special player here and we’re really, really excited about what his future is,” Campbell said. “I thought he did a great job responding today. Obviously the video tape will tell us more, but we’re really proud of who Jake is.”

ISU’s 12 October wins since 2017 are the most among all FBS teams. … Eleven different Cyclones had catches Saturday, which is their most since 12 players caught passes in a 2012 win over Kansas. … Tight end Charlie Kolar made his first touchdown grab of the season. … Will McDonald broke through for a sack, giving him 9.5 such behind-the-line tackles in his past eight games. … ISU has had a 100-yard rusher in each of its last seven games against the Red Raiders.