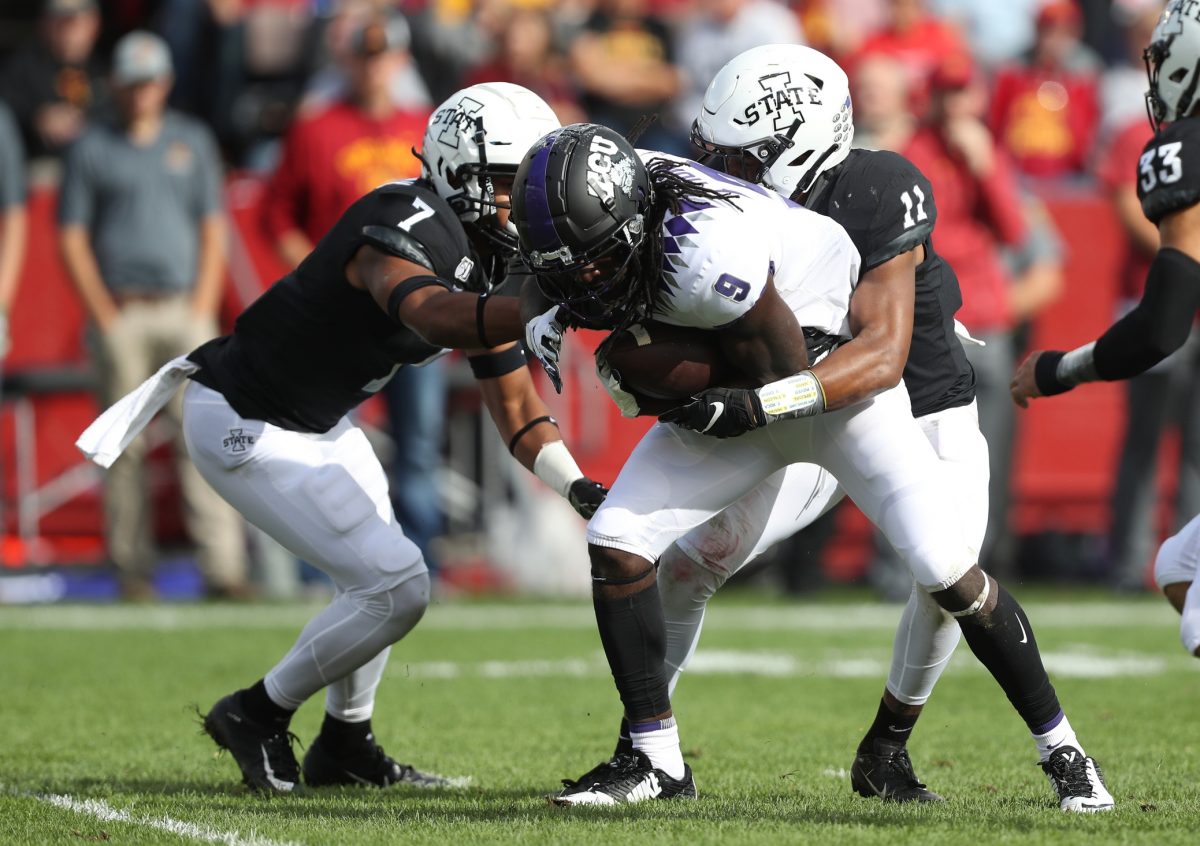 AMES — Two takeaways. One touchdown. Being stingy when it mattered on third down.

Iowa State’s defense and special teams shined in a variety of detail-oriented ways in Saturday’s 49-24 win over TCU at Jack Trice Stadium.

On defense, the Cyclones (3-2, 1-1 Big 12) allowed the Horned Frogs to convert on just one of their first nine third down chances, which helped set the tone as the offense finally exploded and keyed a rare runaway conference win.

The Cyclones struggled a bit in the second half as TCU quarterback Max Duggan found his bearings and railed his team to within 35-24 with 9:01 left, but even that worrisome stretch came with an asterisk attached.

“We started going downfield and I think they lightened up and were making sure you don’t get beat deep,” said Horned Frogs head coach Gary Patterson. “They didn’t apply pressure like they did earlier in the first half.”

The opportunism on defense halved ISU’s wrong-sided turnover margin ledger from minus-four to minus-two — and even produced a touchdown when O’Rien Vance sacked and stripped Duggan of the football, which defensive end Enyi Uwazurike collected and ran into the end zone early in the second quarter.

“Again, those plays, we’ve been really close to making those plays at times and we haven’t made them in our tough losses and we’ve been able to make them when we’ve won football games,” Cyclones head coach Matt Campbell said of forcing turnovers. “People get sick of me talking about winning in the margins, but at Iowa State, for forever, that’s how you’re going to win games, in the margins. That’s success. So I think just the ability to make them, create them, get the ball back and for the most part today (we) did a really good job taking care of the football. I think, really, really important not only today but as we continue on and move on, it’s got to be an anchor to this football team and this football program.”

The Horned Frogs were averaging 275.3 yards per game on the ground, but struggled to move the ball at all until the Cyclones had built a 28-3 lead early in the second half.

Campbell said ISU safety Greg Eisworth should be good to go next Saturday at West Virginia after sustaining an apparent shoulder injury early in the second half against TCU.

NO “DROPOFF” WITH PETERSEN AT DE

Coach Campbell said senior defensive end JaQuan Bailey’s lower leg injury required surgery this week and it’s uncertain if he’ll be able to return this season. That’s a very bad break for Bailey, who is one sack from becoming the Cyclones’ all-time leading pass rusher, but there could be a silver lining.

Bailey could redshirt if he can’t heal in order to reenter the lineup this season — and sophomore Zach Petersen has performed very well as both a backup and now starter.

“There really hasn’t been a drop-off in Zach Petersen,” Campbell said. “He’s played good all year. I think he showed everyone else today how good of a football player he is and certainly the effect and impact he has on the football game for us.”

Petersen had six tackles and a forced fumble in his first career start.

“We just kind of went about our business knowing next man up mentality,” Petersen said. “Just got to play the defense we play.”

ISU scored 14 points in each of the past two seasons against the typically-stingy Horned Frogs. So Saturday’s explosion of 49 points — the most the Cyclones have scored in the series — was a welcome tonic in more ways than one.

“We won two years ago and we lost last year,” said tight end Charlie Kolar, who made his second touchdown catch of the season Saturday. “As an offense, 14 isn’t enough to win. You can’t ask our defense to play that well every single week and for us, it was taking the responsibility on us. That loss last week (23-21, at Baylor) is on us as an offense. Everyone is talking about the drive (for a game-winning Baylor field goal) at the end of the game, but that’s not the defense. It’s us. We made them play the whole entire game because we couldn’t do anything (until the fourth quarter), so as an offense we took a lot of responsibility for that loss and we just came back this week and kept getting better.”

ISU won its fifth straight conference home game for the first time ever. … Johnnie Lang, who rushed for two touchdowns, gained a career-best 72 yards on the ground. … Tight end Chase Allen made his first career touchdown reception on the game’s opening drive. … Linebacker/defensive end Will McDonald posted his second career sack. His first came last season at TCU. … ISU and Alabama are the only power five programs to be undefeated in the month of October since 2017.

“Pretty special guy. How many touchdowns did he have, a lot? That’s a big fantasy day. I wish we could draft him in my league. I’m pretty terrible right now. But he’s a special guy. It isn’t just what you see on the field. He’s a leader off the field, too.” — Kolar on quarterback Purdy, who scored four touchdowns (two passing, two rushing) Saturday. 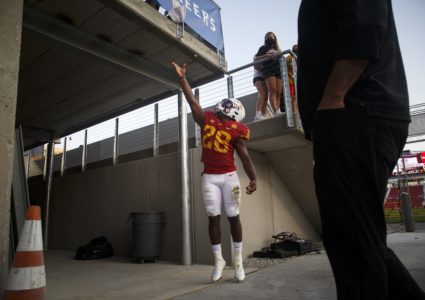