Iowa State completely dominated Texas Tech Saturday in a 31-15 win that would aptly be described as workmanlike in the best possible way.

“We played really complementary football today,” said Cyclones head coach Matt Campbell, whose team is 3-0 in Big 12 play for the first time since 2002.

All the positives 24th-ranked ISU (3-1, 3-0) has showcased this season were on full display — from Breece Hall’s two rushing touchdowns behind a solid, but patchwork offensive line, to Brock Purdy’s efficient 300-yard two-touchdown passing performance.

The stubborn negatives made an appearance, too — from a blocked field goal that turned into a Texas Tech touchdown on the first drive of the game to costly penalties, including one that negated a touchdown that preceded the doomed field goal try.

“I’d say the really impressive thing from our team today was just our poise,” said tight end Chase Allen, who caught four passes, including a touchdown. “Something went bad, really bad, right away and it didn’t affect our next drive. We just happened it in. And these drives are long, long, long. Third downs, we’re converting. Fourth downs, we’re converting. We just keep playing the next play, keep playing tough, keep playing physical and we found our way to the end zone. If we can sustain that for all four quarters we’re gonna be hard to beat.”

That’s a big, but tantalizing “if.”

Hall gouged the Red Raiders defense repeatedly and helped the Cyclones rush for more than 200 yards in a conference game for the second time this season.

In 2019, ISU didn’t notch a single 200-yard plus game against a league opponent. Saturday, the Cyclones used a bruising, ultra-efficient and diverse offense to amass 29 first downs, 516 total yards and a mammoth edge in possession time (40:51 minutes to 19:09).

One clear reason: the depth on the offensive line. Trevor Downing didn’t play for the third straight game and Joey Ramos went down early with an injury, but ISU’s front five still pushed Tech around with regularity and impunity.

“Our offensive line holds everybody accountable,” said Hall, who has eight rushing touchdowns this season. “We’ve had guys go down and guys have had to step in and it’s really been the same. … That next-man-up mentality really sticks with the O-line.”

As for the defense?

Well, Tech (1-3, 0-3) came into Saturday’s game averaging 37.3 points and 512 yards per game. The Red Raiders didn’t eclipse 100 yards of total offense until the fourth quarter — and the offense didn’t score its first points until 4:54 remained.

Tech also didn’t convert a single third down (0-for-10) and needed its only successful fourth-down conversion to keep its one late scoring drive alive.

“We come in and try to win on first down and I think we did that today,” ISU linebacker O’Rien Vance said. “I feel like all throughout practice and through our scheme and our gameplan that we put in this week, our main goal was to get off the field as fast as possible and we did that.”

Jake Hummel led ISU with nine tackles. Vance added eight. Zach Petersen and Will McDonald each notched a sack as the Cyclones held Tech below 20 yards on seven of its 11 drives.

“Man, when you play a team like that, that’s so dynamic on the offensive side, if you’re not playing complementary football, I think you’re gonna really get yourself in trouble,” Campbell said.

No trouble was to be found for the Cyclones on Saturday outside of some detail-oriented mistakes and allowing their third special teams touchdown of the young season.

No real comeback opportunity materialized for the Red Raiders, either.

That’s because of the poise Allen mentioned — along with a stubborn refusal to panic, press, or deviate from the winning plan. Imperfect won big on Saturday. Trending toward more toward perfection must begin in the off week as the Cyclones prepare for an Oct. 24 trip to fellow conference unbeaten Oklahoma State.

“We want to be the best version of us and there were some things today — the blocked field goal, we had a touchdown called back again today because of an illegal formation, there were some things at the end of the game, defensively — those things aren’t what elite teams do,” Campbell said. “It’s early in the season and we have to coach it and get it corrected. Some of those things or some of those people — whether it’s repetitive or not — we have to do a great job of getting it fixed. We want to become the best version of ourselves and it’s going to be detail and precision that allow that to happen. We still have some work to do and it’s early in the season, but it must get done.” 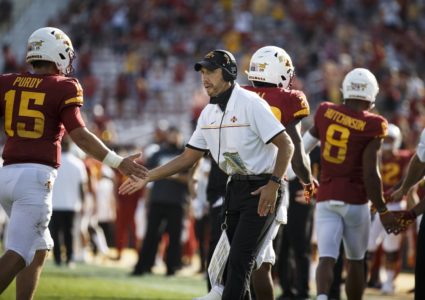 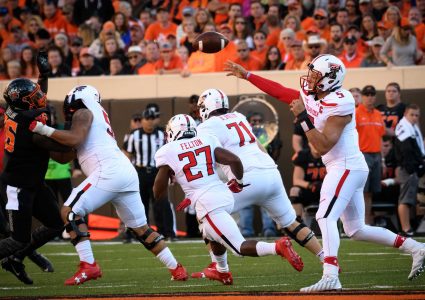 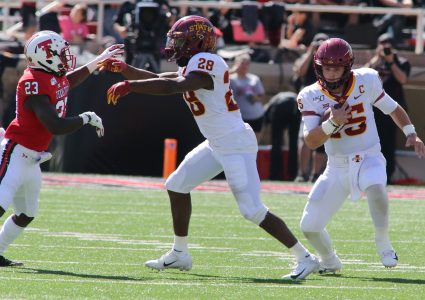