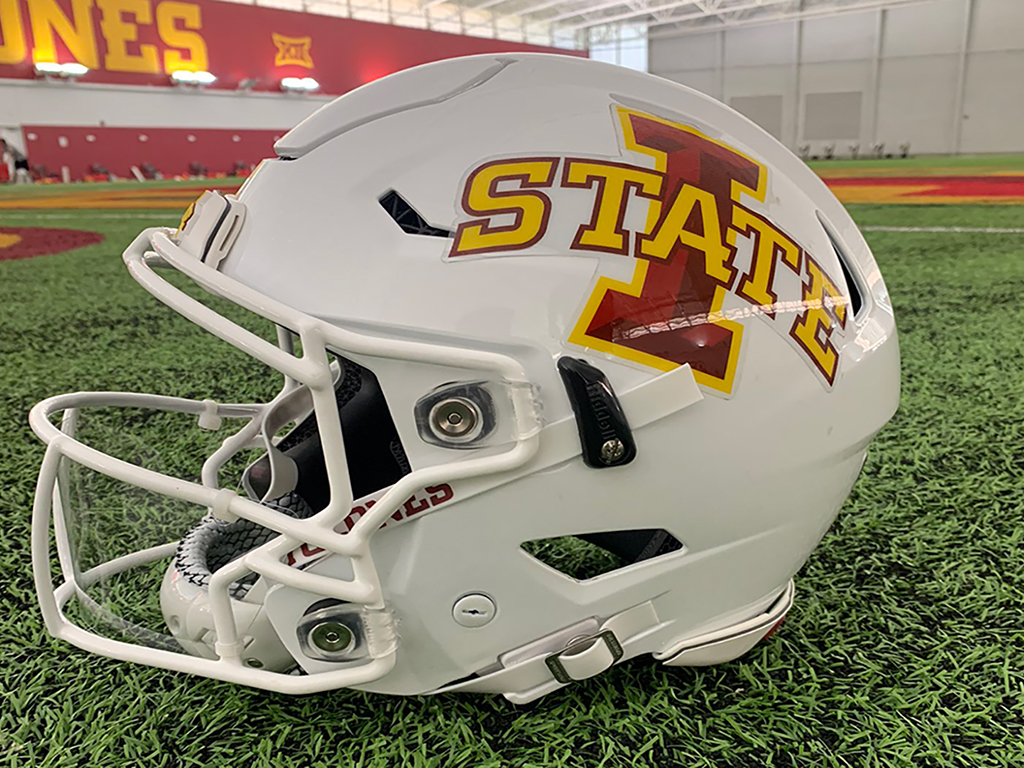 Michael Dryer and Chase Clark needed to find a solution.

How would the Iowa State football program handle obtaining face shields for the inside of helmets to protect the Cyclones during their return to the field in the midst of the COVID-19 pandemic?

Major corporations across the country have been releasing their own iterations of the shields, but the reality is those could cost the program thousands of dollars to get. So, Dryer and Clark, two of the program’s three Assistant Directors of Equipment Operations, reached out to a contact in the Iowa State College of Engineering.

That contact, Leslie Potter, a professor in the College of Industrial and Manufacturing Systems Engineering, put them in touch with Dr. Matthew Frank, another professor in the college and soon, the idea for the Cyclone Shield, which was officially unveiled by the Cyclone Equipment staff’s Twitter account on Tuesday, was born.

“I’m sure you’ve seen there’s all kinds of companies coming out with things like these like Schutt, Oakley has one for the NFL right now, and, really, it came down to money,” Dryer told Cyclone Fanatic in a phone interview Tuesday afternoon. “Is this really something we need to spend a couple thousand dollars on or can we figure something out ourselves? Literally, before our walkthrough one day, Chase and I were like, “Let’s reach out to our engineering school,’ and that’s where it kind of started.”

The shield, which is made of lexan polycarbonate, is the product of 12 days of work by Dr. Frank. In those 12 days, a design was settled on, prototyped, tested and produced for use by the 2020 Cyclones, which projects to be one of the most-talented teams in the program’s history.

As you can probably already assume, 12 days is certainly fast for any sort of development and manufacturing process, which speaks to the strength of Iowa State’s engineering department and the folks who work in it.

“Certainly when you start with a design challenge and you have to determine materials and the actual design of it and how to make it and to go into production. It certainly usually takes a long time,” Dr. Frank said. “The reality is a shield inside a helmet is a pretty simple thing. At least, we didn’t design a car or anything in 12 days. It’s just a shield. It’s kind of what we do. We work out of the Slater Labs for Advanced Manufacturing and the focus for my research is rapid manufacturing, so finding ways to design, develop and prototype things quickly, so it’s kind of in our wheelhouse.”

From Clark and Dryer’s perspective, the design needed to have a few simple characteristics. Obviously, it needed to be easy to install on more than 100 football helmets. Secondly, it needed to be clear to prevent compromising a player’s peripheral vision. It also needed to fit with the 18 different variations of face masks the Cyclones use, plus work with the Nike visors some players have on their helmets.

Using those parameters, and samples of those 18 different face mask designs, Dr. Frank, who has been largely working from home, like most people during the pandemic, went to work.

“The first step was to come up with a shape and a design that would fit within those 18 different styles with minimum trimming. The other thing was a number of players play with a visor, so the clear visor that we see in the upper half. That’s been common for a long time. We wanted to make sure that it worked with that. So if you wanted to put in a visor, the hole spacing for the shield needed to work with that visor,” Dr. Frank said. “The first thing was the prototypes are paper cutouts and just trying to determine the right shape and size. The next morning, I went into the lab with Aaron Jordan, our lab supervisor, and started looking at different materials that we had on hand. Once we kind of settled in on a material, created a couple of prototypes just cutting out this is a Lexan polycarbonate sheet, it’s a very thin film, it’s like ten-thousandths of an inch thick. Then, back to the house, because we’re working from home for COVID, with my masks and taking those prototype sheets looking at fit testing and seeing how we can get the hole spacing just right. That was kind of the first testing to get the fit right.”

“Then we took a sample into Chase and Michael and at that moment we put it onto a helmet, it was actually (Cyclone quarterback and Industrial Engineering student) Blake Clark’s helmet, and had him try it on and look around, see what his visibility was like. Just kind of got a first sense from the customer perspective of what it looks like. That’s kind of the design cycle of it.”

Next came as rigorous a testing process as possible within such a short time frame. The shield was tested against a number of different substances, including a saline solution to simulate sweat, saliva, different cleaning products for the plastic and the traditional sanitizers we have all come to know during the pandemic.

The shield was put through different extreme conditions in order to simulate the atmosphere of game day such as hours of direct sunlight, heating the shield to 170 degrees to guarantee it would maintain its shape and cooling it to minus-112 degrees to know it would not get too brittle in the cold.

The real test comes when the shield is able to hit the football field, which as of now, is slated to be on Friday when the Cyclones are scheduled to begin fall camp, assuming league rules on starting live football activity do not change in the meantime.

This was why during my phone call with Dryer and Clark, the equipment staff was hard at work installing the shields to players’ helmets, a process they estimated takes roughly two minutes per helmet.

“We’re sitting here right now and putting them on helmets,” Dryer said. “Literally, as we speak, so whenever that first day rolls around when we’re at practice wearing helmets, everyone on the roster will have the Cyclone Shield on their helmet.”

They said the initial response from every player they have had demo the shields attached to their helmet has been positive, but, again, the real final determination cannot come until they are being used in a full practice.

While it will certainly require an adjustment, there are no concerns that the shields will impact players’ breathing or fog up heavily during competition.

“The breathability, face mask sits a fair difference from the mouth so it’s not like wearing a piece of fabric over your mouth. Really, we don’t anticipate it being something that restricts air-flow, but it’s something that will redirect air-flow,” Dr. Frank said. “So, if anyone for COVID safety, is wearing something like a face shield, you know that shield is around you, but you’re breathing fairly freely, but when your breath comes out, it’s been redirected down to your chest in a way. We did test it with a visor and the shield on a helmet and took some good breaths in it. From what we see now, there isn’t really a problem with fogging up. The question is what might that look like later on in the season. Maybe by then we’ll have time to look at other materials or treatments to deal with that, but that hasn’t been an issue.”

While the Cyclones were obviously the initial concern with developing the shields, Dr. Frank and his colleagues are working on making the materials and plans for the shields, which cost less than one dollar to produce, available to the public through a website expected to launch early next week.

“The reality is that it is fun to do it because we’re doing it for the Cyclones, but, at the end of the day, we’re making it available for anyone who wants it,” Dr. Frank said. “We’re preparing a website that any high school or anyone who wants to make it, we’re sharing the design and the materials. The actual Cyclone Shield can be produced for under a dollar. We actually have the program for cutting available for Cricut. The kind of home hobbyist cutter machine. We’re going to make that available so if parents want to make shields for their high school. That will be coming up early next week.”

This should open the door for programs to safely return to the gridiron without spending hundreds or thousands of dollars many schools and people likely do not have right now to purchase shields from major corporations.

“I think our guys really want to play football,” Clark said before Dryer added. “They know this is the next step.”

And it was a step taken by an on-campus partnership at Iowa State. 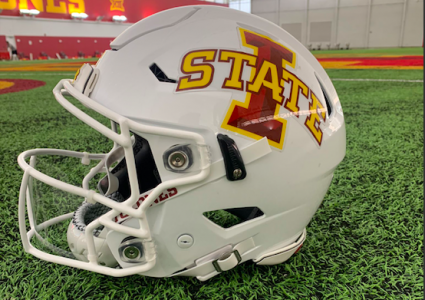 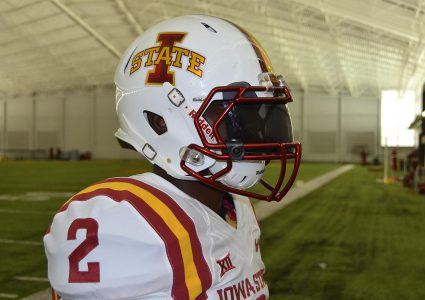 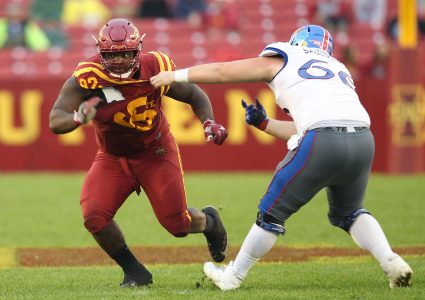