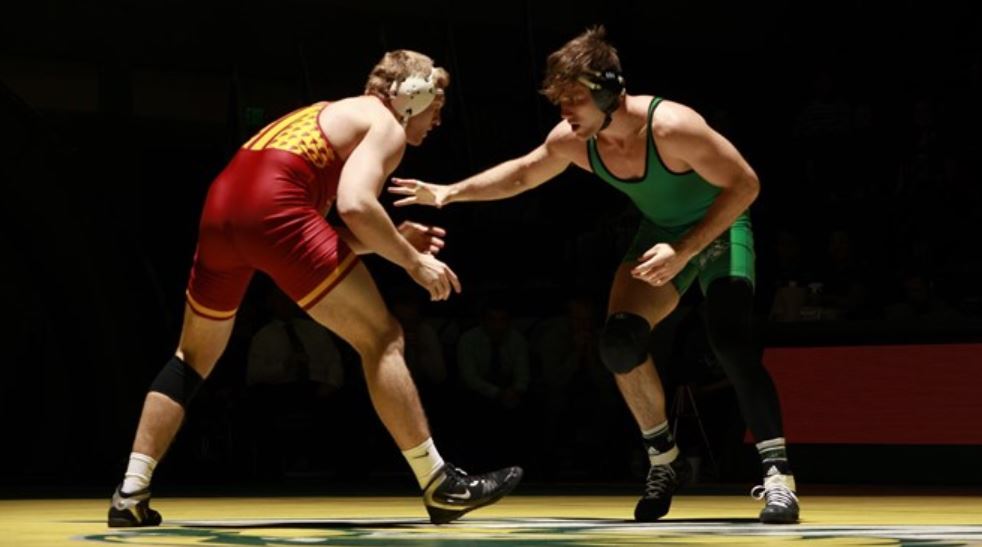 How It Happened
Shapiro got things going against Utah Valley’s No. 17 Tanner Orndorff. Shapiro wasted no time, securing the first takedown of the match. Orndorff got to his feet and fired off an attack of his own. Shapiro countered perfectly and brought Orndorff’s shoulders to the mat in 2:12.

No. 10 Gannon Gremmel took on Chase Trussell at heavyweight. Gremmel scored a takedown late in the third to outlast Trussell, 3-2.

At 125 pounds, No. 9 Mackall fell into a 6-1 hole against Will Edelblute. Edelblute scored on two takedowns and turned Mackall for a two count on the second takedown. Mackall reversed Edelblute to make the match 6-3 and then went to work on top. He was able to earn the fall over Edelblute in 2:55.

The 133-pound match was a barnburner between No. 21 Todd Small and No. 17 Taylor LaMont. The two combined for eight takedowns in the match, but it was Small’s takedown as time expired that proved to be the difference in the top-25 tilt. Small took out LaMont by a final score of 13-12.

No. 5 Parker took on Cameron Hunsaker at 141 pounds. After a scoreless first period, Parker scored on an escape and a takedown in the second. He began the third period on top and did well to break Hunsaker down. Parker was able to earn the fall in 6:43 to bring the Cyclones into the intermission, leading 24-0.

Out of the break, Leisure strapped it up with Landon Knutzen. Leisure scored a quick take down and turned Knutzen for a four-point nearfall. Leisure then bullied Knutzen over again and pinned the Wolverine in 1:50.

Carr, ranked No. 3 at 157 pounds, was also quick to his attack, taking Jerry Rubio down off the whistle. He let Rubio out and took him back down and turned him for a four-point nearfall. Leading 8-1, Carr was patient and locked in the fall in 1:29.

At 165 pounds, Chase Straw racked up four takedowns in a commanding 11-5 decision over Koy Wilkinson.

The other big story line for the Cyclones on Thursday night was the lineup shuffle at 174 and 184 pounds. Sam Colbray is now down at 174 pounds and Marcus Coleman is making the bump up to 184 pounds.

In their debuts at their new weights, Colbray and Coleman both earned victories. Colbray took out Grant LaMont by a score of 4-1, while Coleman iced away the shutout behind a 7-4 victory over Jacob Armstrong.

Next Up
Iowa State continues its trip out West on Saturday with the Sun Devil Duals. ISU will take on Campbell (noon CT), Harvard (2 p.m. CT) and Arizona State (8 p.m. CT) at Chase Field. It will be the first wrestling event to ever be held at a Major League Baseball stadium.