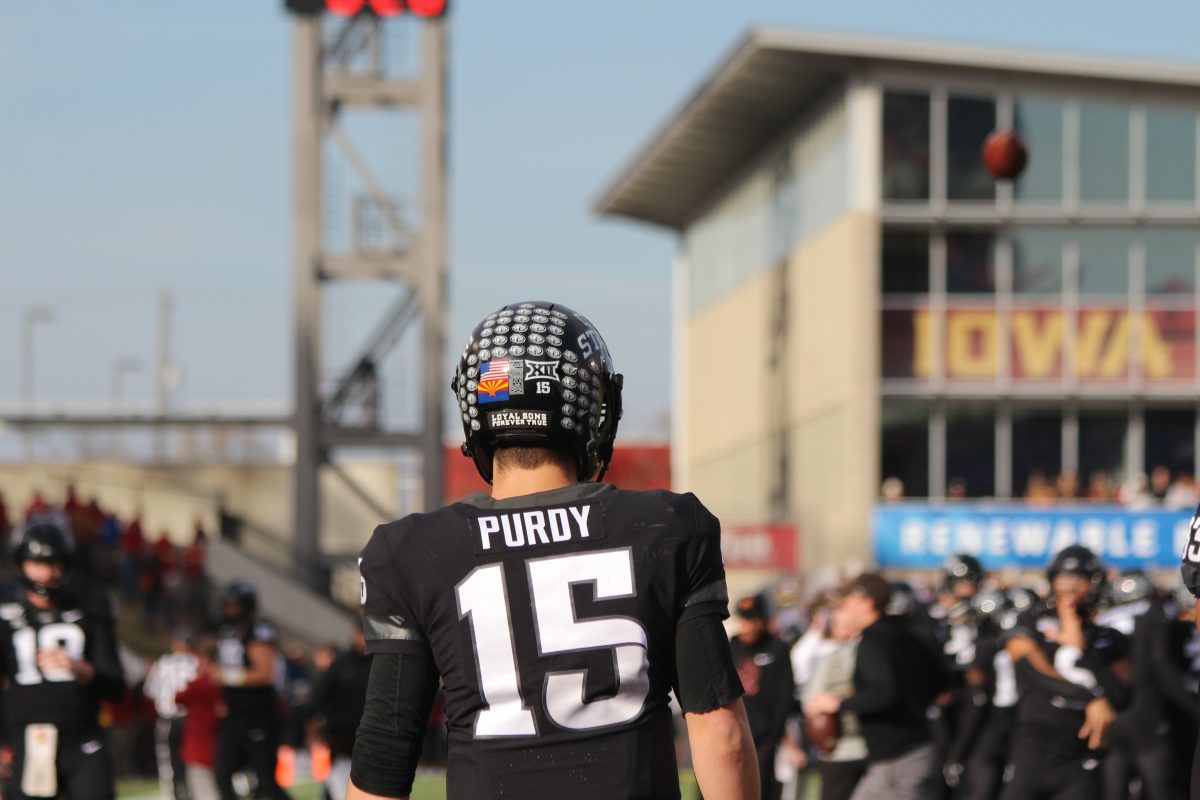 Deshaunte Jones did not know if his quarterback could see him, streaking wide open 50 yards down the right side of the field without a Texas Longhorn defender within at least 15 yards of him.

After eluding three Texas pass rushers with a deep rollout to his left, Purdy was looking for an open receiver on Iowa State’s first play of the second half in the Cyclones’ 23-21 win over No. 22 Texas on Saturday at Jack Trice Stadium.

Finally, standing at his own 18-yard line, Purdy saw a hand.

The Cyclones’ sensational sophomore signal-caller wound up and launched the ball downfield into the waiting arms of Jones at the Texas 32-yard line. The senior from Cincinnati, who is cementing a legendary career of his own, did the rest, carrying the ball into the end zone for a 75-yard touchdown.

“I just kind of threw my hand up naturally and I guess (Purdy) saw that,” Jones, who finished the game with seven catches and 144 yards to go along with the score, said. “That’s what he said on the sideline. Luckily, I threw my hand up and he saw me downfield.”

It was Iowa State’s second-longest play of a 2019 season that will end in postseason play for the third consecutive year. It was another play added to the long list belonging in Jones’ highlight reel. It gave Iowa State some early second-half momentum in a game they desperately needed to win.

“Isn’t that like exemplary of Brock Purdy? I’d love to tell you we dialed it up that way and that’s how it was going to be. Maybe, I should. It would make us look smarter, probably, but he escapes the pocket, that guy is the last option and he just keeps playing,” Matt Campbell said. “Deshaunte makes a great play and finishes the play, but it’s total Brock Purdy. The spin move he makes to get out of the tackle was incredible.”

On Saturday, Purdy completed 30-of-48 passes for 354 yards and two touchdowns with one interception. His first touchdown pass of the day, a two-yard pop pass to a wide-open Charlie Kolar, was his 21st of the year, breaking a 22-year old school record previously established by Todd Bandhauer in 1997.

This was Purdy’s 10th consecutive game with a touchdown pass, tying a school record held by the aforementioned Bandhauer and David Archer in 1983.

It was his fifth game with 300-plus yards this season and the eighth such game in his career. Both of those numbers are school records.

The Gilbert, Az. native moved to fourth in Iowa State history with 5,453 passing yards in his career. His 251 completions this season are the second-most by an Iowa State quarterback in a single-season behind only Sam Richardson in 2014 and that is a record Purdy will break with his fourth completion next week when Kansas visits Jack Trice Stadium.

Well, move over Seneca, this new No. 15 might be here to take that throne.

“It’s kind of (become) normal now the things he’s doing, the things he can do to get out of pressure and just be able to throw the ball downfield is amazing. Being a sophomore, doing that, that’s incredible,” Jones said. “All praise to Brock. There’s nothing I can say bad about Brock. He’s going to continue to get better and continue to do great things for this program.”

None of this is meant to say Purdy has been perfect this season because he certainly has not. He would probably be the first one to tell you that, too.

This is meant to make you sit back and think for a moment about the last time we saw an Iowa State quarterback play at the level Purdy is right now. If you are anything like me, the images of Wallace weaving through the Texas Tech defense on an October 2002 night just danced in your head.

Throwing that tidbit out there just in case you were not already impressed enough. And if you are still not convinced, just read this quote from Purdy on what has allowed him to have so much success so early in his career.

“I came here for the culture and for what Coach Campbell stands for and this university. If I wasn’t here, I don’t know if I’d be doing the things I’m doing because the people around me, man, are just so amazing,” Purdy said. “They set me up for success. Offense, defense, special teams, coaches, just being around here, I love being here. Without everybody here in this facility, it takes everybody to be successful, I wouldn’t be where I am.”

Purdy is the perfect quarterback at the perfect time for this moment of Iowa State football. The program is so close — literally 11 points close — to breaking to heights it has rarely, if ever, reached in its 127-year history.

The Cyclones are playing with, and now beating, the big boys of the Big 12, a league this program was once an afterthought in. The talent level has risen to the point where Iowa State will lose four of its five starting offensive linemen and some key defensive players, but will still go into next season with even higher expectations.

There are a lot of reasons for this change with the first one being the head coach who, whenever he leaves Ames, (hopefully a long time from now), will be the first to leave Iowa State having defeated every team in the program’s conference. There is the defensive coordinator who is considered one of the best in the country and the offensive coordinator who left Ames for the NFL – then left the NFL to come back to Ames – and become a candidate for the Broyles Award, which is given to the nation’s top assistant.

There are numerous skill position players from Jones to Kolar to La’Michael Pettway to Breece Hall and the list goes on. Not to mention the group of defensive players, a list too long to spell out here, that has created a new standard for defensive excellence in the Big 12 over the last three years.

And, of course, there is the quarterback who has become the unquestioned leader of the team. He is reaching statistical heights we have never seen from an Iowa State quarterback less than halfway through his career.

The first half of Brock Purdy’s college career has been about doing things no Cyclone signal-caller ever has. The second half, will, hopefully, be about taking Iowa State football to levels it has never been.

“He’s a really special football player. He’s a guy that gives us a chance to win each week,” Campbell said. “You see him really growing. That’s fun for us. I’m really proud of him.” 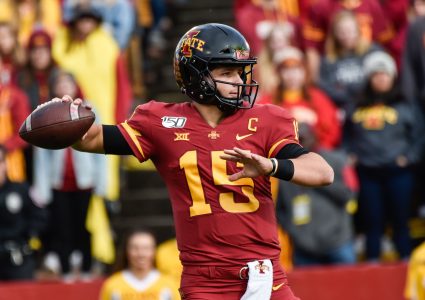 STANZ: Brock Purdy and the school record he should hope he will never approach again