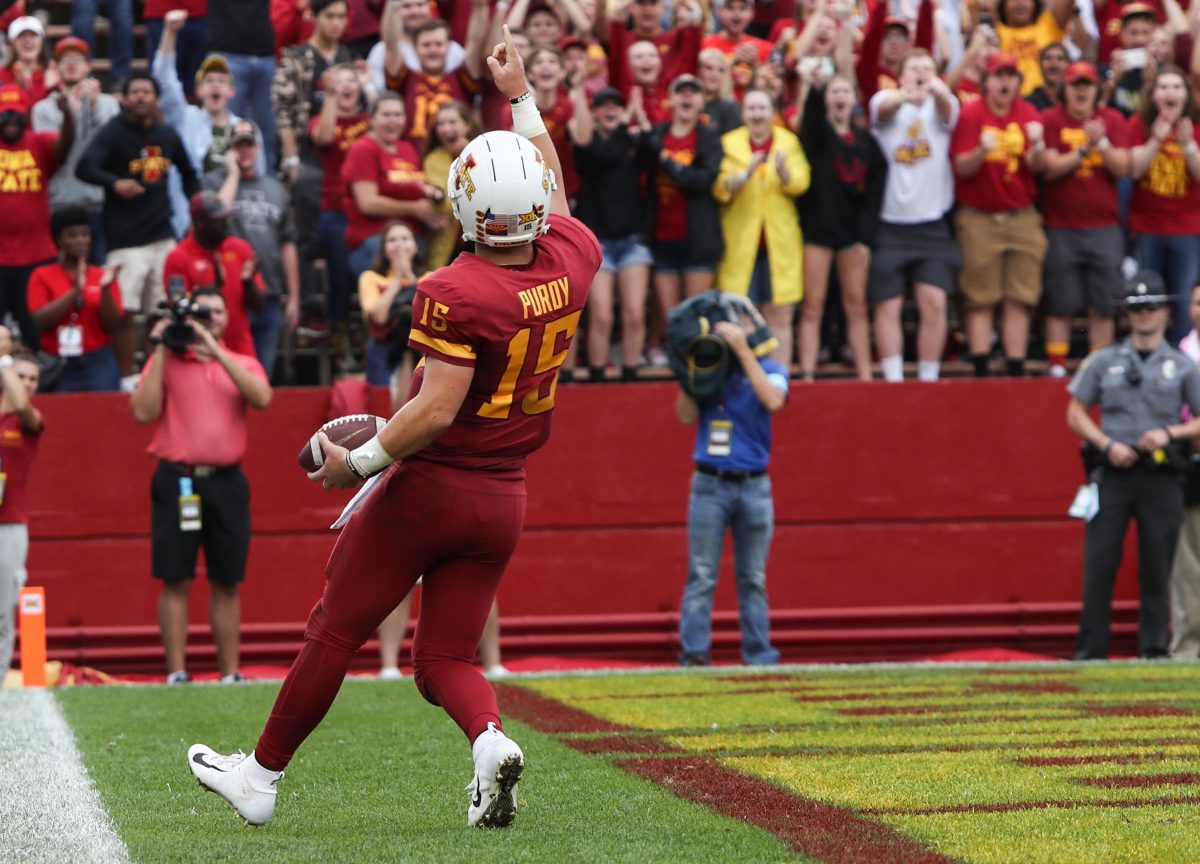 Purdy had just finished heaping praise on his receivers when a reporter reminded him of his hand in accumulating 510 yards of total offense in Iowa State’s 72-20 win over Louisiana-Monroe.

Those 510 yards of total offense are a single-game school record.

Outside of a first-quarter miscommunication that led to an interception and a bobbled handoff on the team’s next drive, it might have been the best-quarterbacked game in the history of Iowa State football. Even still, Purdy wanted nothing to do with praise.

“I mean, they’re the ones making plays,” Purdy said. “All I’ve got to do is get the ball to them.”

If you have ever wondered why Matt Campbell says Purdy is special, it is moments like this. These are the times when you truly come to appreciate the impact this 19-year-old from Arizona, who left Saturday’s evisceration of the Warhawks in the third quarter having completed 21-of-27 attempts for 435 yards and three touchdowns through the air to go along with 79 yards and three scores on the ground, has made on Iowa State football in the last 11 months.

Ever since Purdy jogged onto the field in Stillwater last October, this offense, team and program have been different. The offense has been explosive and dynamic — best exemplified by Saturday’s performance — while the team has found consistent success going 9-3 in Purdy’s games as the primary quarterback.

The kid is just different, unlike anybody we have seen in Ames in nearly two decades, but we will come back to that in a second.

“That guy is special,” senior wide receiver Deshaunte Jones, who caught two passes for 100 yards and a touchdown, said of his quarterback. “I’m proud of what the guy is doing right now. He has all the qualities to be one of the best players to ever play at Iowa State.”

How perfect was it that the guy most people would say is the best to ever do it at Iowa State entered the school’s Athletic Hall of Fame this weekend? Yeah, Seneca Wallace, the OG No. 15, was on hand to see the total offense record he shared with Austen Arnaud wilt away in the Ames mist.

Wallace’s record-breaking career came across two seasons, too. The only difference, he was a junior college transfer who was more or less a grown man by the time he took his first snap in Cardinal and Gold.

This iteration of No. 15, the scrambling, awe-inspiring playmaking superstar, is still a freaking kid. He is doing — and has been for a while — things that you don’t see quarterbacks do as freshmen or sophomores.

“I told Brock, he’s awesome,” redshirt sophomore Tarique Milton, who added some highlights of his own while catching three passes for 142 yards and a score, said. “He’s one of the coldest people I’ve ever seen. I told him I want to be like him someday.”

While he has seen praise heaped on him from his coaches and teammates alike, while the media has taken notice of his unique talents to the point where the sophomore was a major reason Iowa State was a trendy choice to win the Big 12, Brock Purdy has remained the same person.

Earlier this week, I was asked during a radio hit whether or not Purdy has been impacted by this newfound fame. I scoffed at the thought because this kid is different.

And it’s been a long time since we’ve seen anyone like him.

“It just happened. Our offense clicked,” Purdy said. “The receivers did great. Offensive line did amazing. It just happened. It’s not something where I go into every game thinking records. As long as we’re winning, I’m totally fine.”