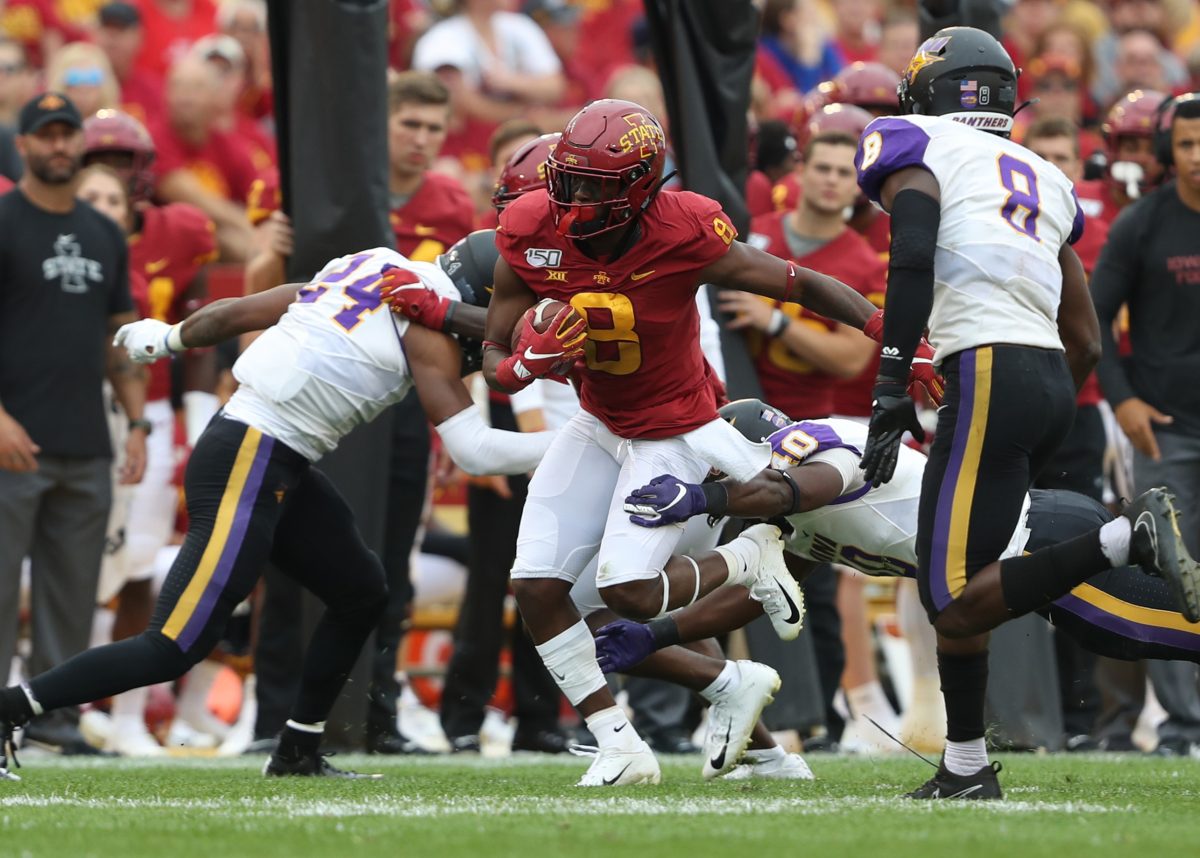 UNI vs. Iowa State was not what I expected, nor was it necessarily fun. However, it was live football and a chance to see whether the hype and fruit punch I and others have been serving had a sweet or bitter aftertaste.

The verdict: A bitter start with a mellow finish.

Iowa State made a choice. They chose to play a “take what they give you” game with little risk and little margin for error. It is a common choice, and wise in some regards. It was clear that there was an intent to test the offensive line play and the run game, to take little risk in the passing game, and to rely on a defense that has proven it can be relied upon.

The disconnect and risk manifested in the presence of correctable mistakes in the margins that caused a less than satisfying result. The game was “as scripted,” largely until a fumble was returned for a touchdown and  a field goal was missed which jeopardized everything. Yet, instead of showing any pivot in plan, the staff relied on the moxy and toughness of its team to push through to victory by the thinnest of margins.

*** Bye week benefits are largely related to health issues and personnel changes. Iowa State gets an opportunity to use what becomes live scrimmage film to emphasize mistake elimination and to clean up sloppy technique coming out camp. In addition, the team’s focus should be heightened with a lucky win and allowed for post-camp progress to be made.

*** UNI had the better kicker.

*** There was a weak link in the secondary that allowed unearned yards through poor coverage position and missed tackles. Braxton Lewis provides a steady, if unspectacular, hand and will be welcomed back after the bye.

*** No. 74 and No. 51 struggled in pass protection and with consistency. They remain “leaners” versus strikers and are below average with their footwork. For a contrast, see the play of No. 66 and No. 57, which was average to excellent for the entire game.

*** The defense utilized base and standard pressure packages for most of the day. But, the first series indicated an interesting departure. ISU lined up six across with one down in a 1-5-5 type look. They utilized seven defensive lineman on the first series, and brought some interesting pressure. In addition, at certain points, it almost looked as if they were utilizing a Bear front, which is an interesting and creative twist.

*** UNI, as will be illustrated, utilized the Cyclone defense against the Cyclones, with an even larger emphasis on clogging the deep throwing lanes.

*** Important point here. The Alamo Bowl was imminently winnable barring a fumble and excessive penalties taken at crucial points in the game (and a missed field goal). The first game of 2019 featured only 5 penalties, but three of them killed drives and nearly explosive plays. A missed field goal late set up a tie. Missed blocks in the redzone killed scoring efficiency. A turnover led to a deficit and a near turnover almost led to a loss. Neither of ISU’s last two games featured the discipline which has been the hallmark of the Campbell era. Correction is needed.

The blocking to the edge on this play was outstanding. I had a negative comment aimed at 74 above, but he is the catalyst for this play. Note, the right tackle and right guard as they combo block the end and 74 climbs to seal the second level with help from the F back. The guard’s footwork delivered from a power base eliminates the contain threat. If the inside receiver locked on to the most dangerous defender, then this is a much larger gain. This type of quality was present more than it wasn’t on Saturday and is perhaps the most important note in this game.

Second, note the UNI defensive alignment. They stack three on three with the linebackers overdue to the tight slot. The linebackers are at 5 yard depth which is common, but fairly deep. They have placed a robber in the “hole” at 10 and bracketed him with two deep safeties at 12. The corners are at depth, so pre-snap it is difficult to find a hole to attack. This alignment disguises three deep and provides mid-range brackets to the outside. Unless the corners drive the flat, the flats and under the linebackers are holes for the passing game.

UNI’s coverage was focused on staying over the top and triangulating passes in front of the coverage. This is exactly what Iowa State has deployed over the last two seasons with a slightly higher emphasis on the under and mid-range routes and run support. UNI was defending the middle of the field with six defenders and left for chance their tackling ability on underneath completions.

In addition to being one of the longer plays of the day, this play illustrates an excellent manipulation of the UNI alignment. As an aside, it illustrates the intent of the game plan as Iowa State chose to take what was given versus aggressively attacking what UNI was trying to take away. I believe the staff was very strategic in its approach and with what they wanted to have on film for future preparation.

The first down play fake aligns with tendency and draws the problematic hole defender, the robber, down in to the box for run support. The RPO read was simple and Purdy throws to the slot who digs in to the vacated spot. The play still requires excellent timing and the defense is in place to make an immediate tackle, but execution beats alignment and Iowa State successfully plays beyond the chains by manipulating the UNI defense. This too is an alert for growth as the season progresses.

Finally, a positive example of the running backs leaving blocked yardage on the table.

The play indicates an open lane and a 13 yard gain by the running back. No complaints here about the end result of the play. However, there was more, much more here.

Knipfel, Meeker, and Newell dominate their assignments to open a gaping hole. Lang’s eyes focus on his third level block and he determines to run behind the back of the blocker (fundamentally correct) and explode to contact. However, if he expands his vision as he plants between the 45 and 47 yard line, then cuts around the block by the wide receiver, the play extends to a 23 yard gain and possibly to the end zone. The play was blocked for an explosive play, but run for a nice gain. A common theme in the running game on Saturday.

Just a couple of points of emphasis on an otherwise outstanding performance.

For the defense, this was a game of inches. The plucky UNI quarterback and the UNI offense in general, played like the annoying kid in a game of tag who lingers on the edge and darts out of reach without fully engaging in the game.

Note the six across look referenced earlier. The outside linebacker to the high side is free off the edge as designed. I believe this is Will McDonald. He turns the corner and is set up for a sack, but misses and a sack is turned in to a 10 yard gain. The rush backer in this scenario must bend and direct his aim to the front side of the quarterback — bend and flatten. Why? Because you want to force the quarterback to retreat away from the line instead of step up with a two way go (run/pass).

Here, McDonald takes a true aim and does not cut off the escape route or finish the play with another power step. He misses by an inch and gives up multiple yards.

This play in overtime results in a sack, however we see a similar miss to the one shown earlier. The player is the same. Will McDonald is lined up with his hand in the dirt instead of as a stand up linebacker (two plays, two different positions, same job, same result). McDonald rips and bends and uses a proper bend here beating the tackle with speed to the quarterback. However, he misses the sack again by a shoelace.

McDonald needed one additional power step to finish the play. That thought and skill must be taught against a mobile quarterback such as the one playing for UNI. McDonald was one step away from having a multi-sack game from different alignments. The fact that he caused the pressure is useful. Time will tell if he is an “a step away” player, or a TFL player.

Iowa State survived. The team can put this game behind it and focus on cleaning up the near misses and the drive killers.

The were many positive signs in this game, which include the offensive line performance and O’Rien Vance. I have no doubt that the unwillingness to attack and manipulate the defense in the passing game was purposeful based on the few times that they successfully did just that. Live action work on a few defensive wrinkles was invaluable.

However, I maintain my position that early season tinkering is a tight rope that limits the team’s prospects in the non-conference schedule. But, there is wisdom in it given the bye week and the staff’s demonstrated ability to exploit the extra work.

There will be articles written about offensive and defensive progress that will have its roots in this “too close for comfort” contest. 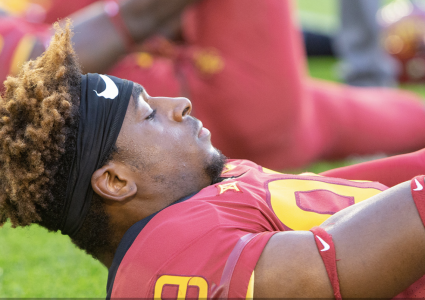 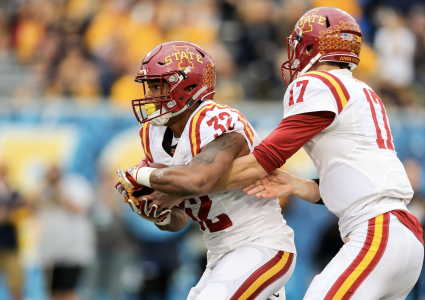