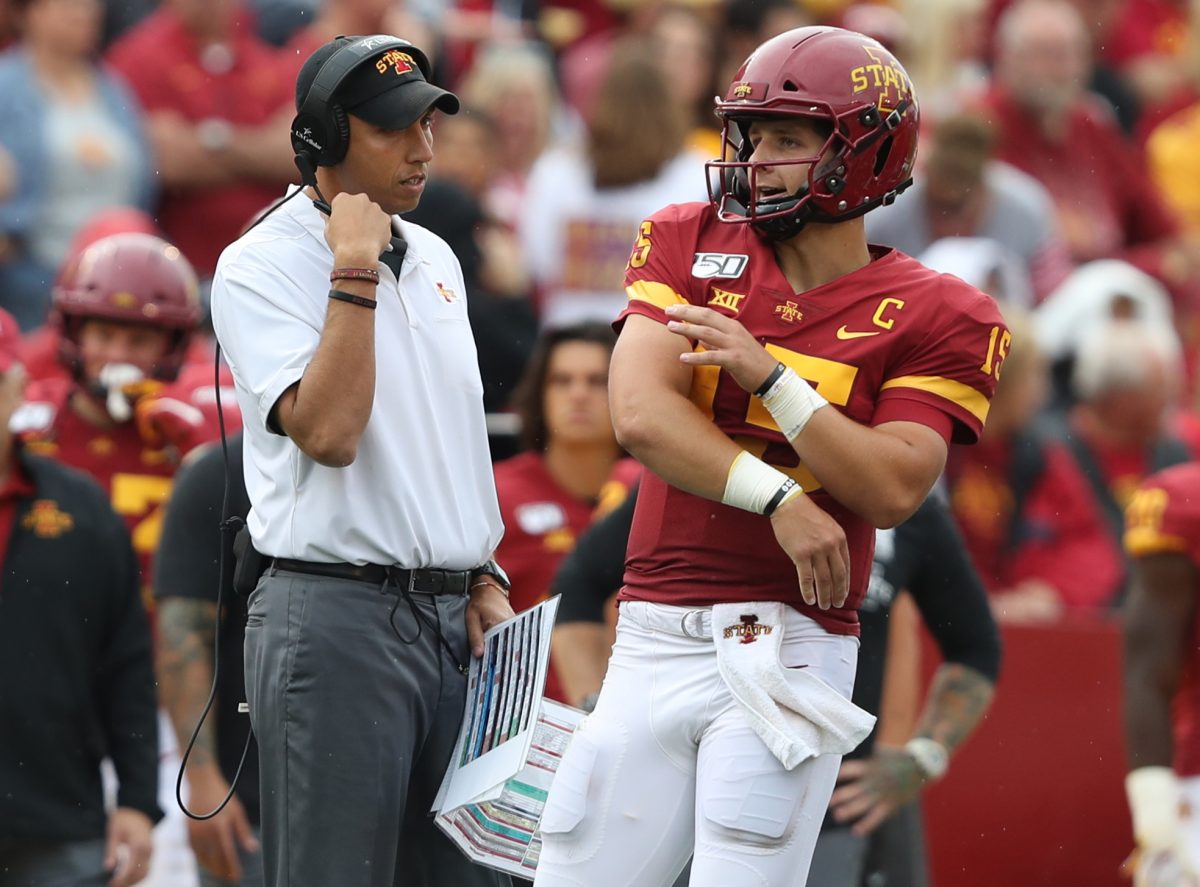 That ball carried the fate of Saturday’s tenser-than-expected season-opener against Northern Iowa in its roughly 13 pounds of pressure per square inch.

Purdy plunged to poll position in the pile and held on to secure a wild, nerve-wracking, and uneven 29-26 win over the plucky Panthers in triple overtime.

“When the ball was on the ground with the situation of the game really being on the line, I just had to do whatever it took to help my team win,” said Purdy who threw for 278 yards and two touchdowns for the No. 21 Cyclones, who overcame an array of ill-timed mistakes to eke out the victory. “If it meant costing my body, then so be it. I’m just happy for the team — and winning.”

“Man, my heart dropped, but I saw Brock busting his butt to get over there,” Croney said of his own fumble that preceded his game-winning plunge to the end zone. “It’s the best feeling seeing your quarterback go in there and dive, head first. I don’t know a lot of (quarterbacks) that would do that, but that’s just the character of Brock — and you know his competitive spirit. That’s a great feeling having that and knowing the other 10 guys on the field have your back.”

The Cyclones were in dire need of backup. Despite outgaining UNI by 200 yards, they trailed 26-23 in the third overtime. They might have even faced a fourth and inches on that final drive, as Croney appeared to be stacked up near the two when the ball came out.

Again, weird game. Somehow, the fumble — since Purdy recovered it — may have helped the Cyclones. And on a day that featured seemingly a dozen turning points, that twist might have been the most bizarre.

“I saw who was underneath the pile, so I knew who would come out with it,” ISU head coach Matt Campbell said. “That’s who that kid is.”

An amped-up sellout crowd of 61,500 never gave up, either. It did fall into lulls of (understandable) stunned silence at times, but provided deafening noise when it was needed the most.

“Our story is never going to change, we are always going to have to win in the margins,” Campbell said of the narrow win. “We didn’t become somebody we’re not. We know who we are. The fact of the matter is we (did good in the margins) at times and we didn’t (do good in the margins) at times. We better learn from it and we better grow from it. What am I excited about? I’m excited that we have a week where we can put our focus entirely back on our program and who we are and take this tape and figure out what we did well, what we didn’t do well and then move ourselves forward. You have to give some credit to UNI, too. We recruited (Panther redshirt freshman quarterback) Will (McElvain) here (as a receiver) and we thought he was a heck of a football player and you saw why I thought he was a heck of a football player. He improvised, used his feet, kept his eyes down field and made great plays.”

McElvain’s greatest plays came when ISU appeared to take control in the second overtime. Purdy hit La’Michael Pettway for his second touchdown to put the Cyclones up, 23-16, but McElvain converted a fourth-and-three before eventually finding Trevor Allen for a seven-yard touchdown to tie the game.

McElvain passed for 228 yards. UNI rushed for just 34 yards and the defense scored the team’s only touchdown in regulation on a 53-yard fumble recovery that gave the Panthers a 13-10 lead late in the third quarter.

Purdy was assessed the fumble, but his arm appeared to have been moving forward. Review upheld the call on the field, however, and ISU was only able to tie the game in regulation on a 23-yard Connor Assalley field goal.

“UNI’s a great team,” said Cyclones senior receiver Deshaunte Jones, who caught 14 passes to match the second-best single-game mark in program history. “They came out and played, as usual — past years they always come out to play. I think it shows where our team is at. We can handle adversity. We can handle a lot of things and still push forward and stay calm.”

Especially with Purdy being able to dive in and save the game as burly linemen fell on top of him, raking at his arms.

“That’s the type of guy he is,” said Jones, who accumulated a game-high 126 receiving yards. “He’s willing to put everything on the line for this team and you can see the toughness and relentlessness of the players that we have. I think that just speaks for itself how true Brock is as a leader and when things get tough, we can lean on Brock.”

Hopefully they won’t need him to do that again. His arm’s meant for passing the ball, not cradling it.

Purdy said he made one fumble recovery in his high school career after one of his backs or receivers coughed it up. One. Obviously this one overwhelingly trumped that one in terms of importance.

“That was the game right there, with the ball on the ground,” Purdy said. “Just put my body on it and the rest was history.”