Championship season has come to an end. Iowa State walked away with a 16th-place finish as a team with 32 points. Head coach Kevin Dresser also officially has his first All Americans: 149-pounder Jarrett Degen and 197-pounder Willie Miklus.

What we learned from the Cyclones in Pittsburgh

This summer will be key in the next step for Iowa State. Some time in the weight room and one-on-one sessions will truly tighten up some loose ends for the Cyclones that were exposed in some of their losses in Pittsburgh.

Lucky for Dresser, he will only be losing one of his starters in Miklus.

Even when the losses did come they didn’t come easy. There wasn’t a single Cyclone that didn’t give it their all during all three periods, for all seven minutes. Key points were scored in many third periods.

One of the most important things to look back on was all nine wrestlers advancing past the first day.

This team has gotten better, is better and still has a lot more to prove. The young roster continues to be a key in the new culture of Iowa State wrestling.

What’s important to remember is that although this team isn’t where Dresser wants it to be, imagine what it will be like when he does get it there?

They had all but one guy in the line-up make it to the NCAA tournament, finished second at Big 12’s, have two All American’s and a Big 12 Champion.

That’s an impressive year two ending compared to year one.

Degen was Iowa State’s lone qualifier last season. He missed All-American status last year by one match but that wasn’t the case in 2019.

The Montana native placed seventh with a rematch win against No. 10 Pat Lugo from Iowa. Degen was trailing 6-2 at the end of the first period but he stayed focused and eventually tied the score 8-8. The Hawkeye earned an escape to start the third to take the lead but Degen was able to gain control. He countered Lugo’s shot to come out victorious in a scramble and got the takedown to secure the win with an additional point for riding time.

Degen has been a staple to the culture change of this young program. A lot of wrestling still left to be done by the lanky 149-pounder.

It’s been no secret the emotional battle this season has been for Miklus.

He walked away having placed sixth and a four-time All American during his final dance at the NCAA Championships.

Miklus was able to do this in front of his fans, family, friends and coaches. From both Iowa State and Missouri.

Sometimes, it’s about more than the team that you have on your chest.#Cyclones 🌪️🌪️🌪️ pic.twitter.com/hZa2JJ5ywo

Miklus lost his match in TB-1 against Fresno State’s Josh Hokit. The score was 2-1 after Miklus was up and out but Hokit was able to reverse Miklus and turn him to his back to earn four back points. Miklus went down 7-2.

The 197 pounder closed out his impressive career that includes 105 career wins, 55 dual victories, four-time All-American and MAC Champion. His final record is 27-6 and had the second fastest recorded pin by a Cyclone in NCAA Championship history. 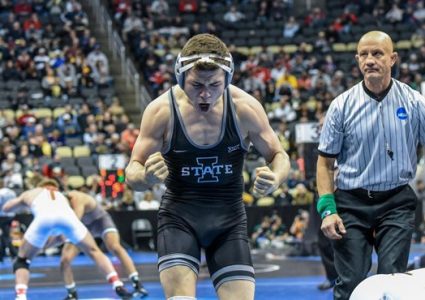