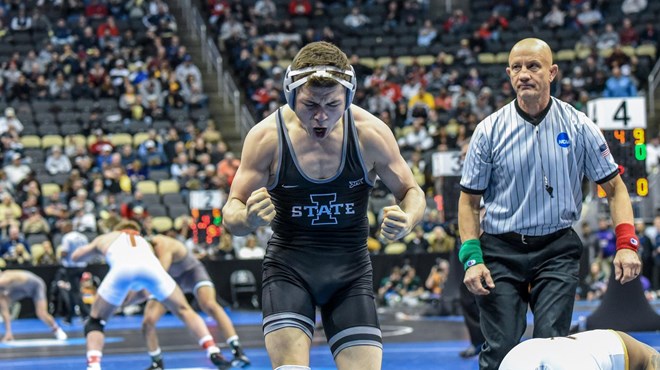 Iowa State is walking into All-American territory tonight with four Cyclones in the Round of 12.

It was an explosive morning from the Cyclones with all the ups and downs.

Alex Mackall: Mackall fought hard to keep himself alive. He started the day with a dominant win over No. 13 Drew Hildrebrandt in a 7-4 win (1:15 RT). In his next match, Mackall was defeated by No. 12 Michael McGee.

The key takeaway from Mackall’s matches? He fought back hard. There wasn’t really ever a moment where the 125 pounder missed a beat. In his second match, he definitely looked like the smaller one of the two. After a long, focused summer of training and muscle building, Mackall should come out even stronger next season. The third period of his match against McGee he showed persistence to hook the leg, get the takedown.

Although he fell short, this is all promising for the future.

Mackall finished his first season in cardinal and gold with a record of 27-12.

Ian Parker: After being a little beat up during the season, Parker had a graceful comeback. He held a steady dual record and even scored a wrestler of the week honor. In the tournament, Parker was exposed in his greatest weakness that ultimately led to a 12-4 loss against OSU’s Kaid Brock.

Parker still ended the season with an impressive 24-9 record. There is no doubt for the committed wrestler that the 141 pounder is that he will bounce back next season.

Chase Straw: Straw was a shining star on the Iowa State roster this season after a strong turnaround midseason that brought him to be the only guy to walk away a champion at the Big 12 Championships. Unfortunately, Straw is done for the weekend after a tough 3-2 loss against Josh Humphries.

Straw ends his season 22-12, a Big 12 Champion with a impressive performance at the NCAA Championships.

Marcus Coleman: The redshirt freshman’s debut was much anticipated after an impressive unattached season last year. Unfortunately, Coleman’s season came to an end a little early. Coleman got knocked out of the tournament after a 6-2 decision loss against David McFadden.

Coleman, a very impressive athlete, is a young who Iowa State will have for three more years. Coleman won’t walk out of the cardinal and gold singlet not an All-American.

Gannon Gremmel: The redshirt sophomore ends his season after getting pinned in 5:42 by Yousiff Hemida.

The Dubuque product ends his season 27-15.

Earlier in the season, Gomez wanted to be the anchor and close out the show in Carver Hawkeye Arena as he faced off against DeSanto. Gomez came out on top after a 14-9 win.

Tonight, the stage is even bigger. The stakes are higher. These two scrappy 133 pounders are going to put on a show of a lifetime.

WRESTLING: Breaking down first round matches at the NCAA Tournament