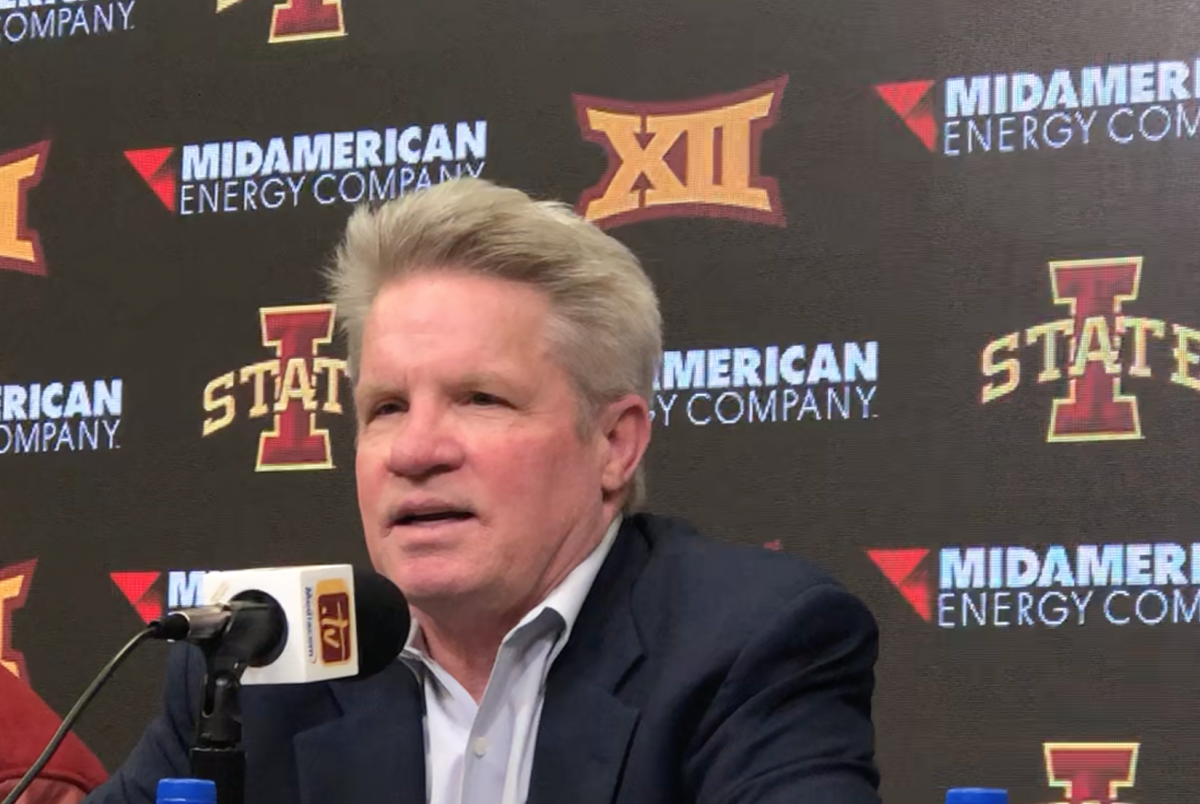 AMES — An amped-up crowd of 11,143. A top-ranked opponent in Baylor. A chance for Iowa State women’s basketball coach Bill Fennelly’s 500th win at the school — and a prime opportunity to cement the No. 20 Cyclones’ perch among the Big 12’s best.

Yes, all the elements were in place for one of those where-were-you-when type of games Saturday at Hilton Coliseum … but  ISU simply couldn’t hit shots.

The Cyclones fell behind 12-2 early, ended up 5-for-27 from 3-point range and despite showing resilience late, fell 73-60 to the long, strong and talented Bears.

“The thing that you can’t do is you can’t give up the runs,” said Fennelly, whose team fell to 20-7 and 10-5 in Big 12 play. “The bad start gets everyone nervous. It takes the crowd out of the game. We make a 3 and it gets waived off on an illegal screen. It would have been 3-2 and you make your first one — who knows what happens? Yeah, there’s no question you invest a lot to come back and we did, and then all of a sudden, maybe you use your legs a little. We had some good looks when it was down nine, missed a layup or whatever, but that’s exactly the wrong way to start a game against a quality opponent. And it doesn’t have to be every shot you make, but instead of missing five in a row, you hit one. OK. Everybody take your breath. But it didn’t happen today.”

“They’re long and that in itself is difficult,” said ISU star Bridget Carleton, who shined in the spotlight, delivering a game-high 28 points. “But I think we were able to get in there at times. We got some looks at the basket and got little pull-up jumpers in the middle of the lane, but yeah, when you have 6-7, 6-4 inside that makes it very difficult.”

Carleton notched her eighth straight game with 17 or more points. Alexa Middleton added 14 points and five assists while helping fuel a 10-0 second-half run that cut Baylor’s lead to nine, at 62-53, with 6:40 left.

But the Cyclones would get no closer as shooting woes continued to mount down the stretch.

“it’s a combination of really, really good defense and some offensive things that I didn’t do as good a job as obviously I should have to put us in those positions,” Fennelly said.

Of course the 500th win attainment was far from Fennelly’s mind before or after the game. It will come, but first ISU must refocus in preparation for Tuesday’s trip to last-place Texas Tech and Saturday’s visit to No. 19 Texas.

“We take the disappointment and frustration we have and the moments that we didn’t do what we were supposed to do in this game, and like coach said, the next nine days we’ve got in the (regular) season, we take that on every single opponent we have,” Middleton said. “Come back to practice ticked off, ready to go and to prove what we know we’re capable of.”

Carleton scored in double figures for the 99th time in her career. … ISU’s 31.7 percent shooting was its coldest effort this season. … Middleton notched her 14th double figure scoring game as a Cyclones and also dished out five or more assists for the 14th straight time.

STANZ: Why this year’s Cyclone women’s basketball team will be a blast to watch