At the half, Iowa State trailed the Lady Bears 41-35. Bridget Carleton’s 24 points came off on 9-of-12 shooting. Baylor shot 50 percent from the field in the first half, but the Cyclones were able to hang in the game behind Carleton’s outstanding offensive output.

The Cyclones went down swinging, cutting the Baylor lead to 11 in the second half behind a 9-0 run. On the night, Iowa State forced 11 Baylor turnovers, but Baylor’s defensive adjustments in the second half were the difference in this contest.

Bridget Carleton came out firing in Waco, netting 24 first-half points. She has now scored in double figure in 18 out of Iowa State’s 19 games this season, finishing the game with 28 points. Carleton added two rebounds, two assists and four steals to her stat line. Carleton now has 180 career steals, which is tied for fifth-best in school history.

Kristin Scott was the third Cyclone into double figures at Baylor. She scored 12 points and pulled down eight boards, while doing most of the defensive work on Baylor’s Kalani Brown She has scored in double figures 13 times this season.

Iowa State will remain on the road this weekend. They’re set to travel to Stillwater, Okla., to take on Oklahoma State on Saturday evening. That game is set to tip at 5 p.m. from Gallagher-Iba Arena. 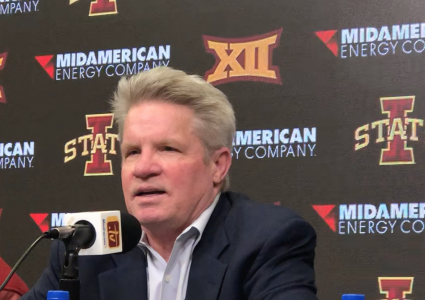