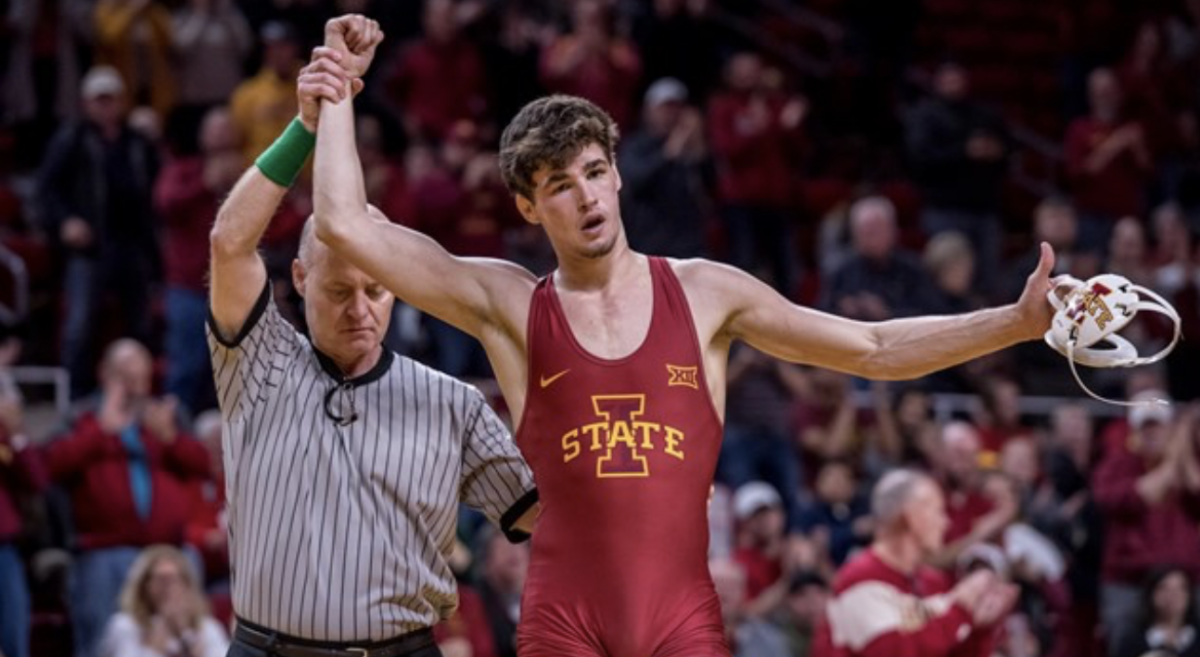 AMES — No. 23 Iowa State competed in Hilton Coliseum for the first time on Sunday vs. Ohio, and the Cyclones walked away with a convincing 33-6 victory.

The Cyclones are staying consistent

Iowa State is focused on staying consistent and tough. In Sunday’s match against the Bobcats, the Cyclones only lost two matches.

One of Iowa State’s biggest flaws last season was the lack being able to attain bonus points. Against Ohio, the Cyclones garnered two major decisions, three decisions and one tech fall.

At 149, Jarrett Degen, who is known for showing up in the bonus point department, took it the next step and pulled through with a fall late in the second period.

Straw and St. John both lose in decisions

Redshirt senior Skyler St. John took the mat at 165-pounds after having had his knee banged up earlier this season at the UNI Open. In his matchup, the action was missing. St. John’s strategy seemed focused around protecting his bad knee.

This brings up the question: Who is going to protect this weight class if St. John continues to struggle with an injury?

The depth at 165-pounds is one of the weight classes that is short in numbers. The class itself has been one of the weaker ones so far this season.

At 157-pounds, redshirt junior Chase Straw lost in a catch and release against Zac Carson, who is 5-2 overall.

“In the two matches that we lost, I thought we could’ve changed some technical things but I thought we wrestled hard up and down the line up,” Kevin Dresser said. “I think we’ve done a good job. I’m a big consistency guy and I felt like we had some consistency.”

Match of the night

The matchup of the night was supposed to be redshirt sophomore Alex Mackall facing off against No. 18 Shakur Laney. This would’ve been Mackall’s second-straight match against a top-20 opponent.

However at 184-pounds, Sam Colbray had the most heated face off of the night.

In what seemed to be headed to a loss for Colbray, he received a point due to Ohio stalling. This brought the score up to 7-8. Within the last few seconds, it seemed Colbray had pulled a takedown. Assistant coach Brent Metcalf challenged that it was. The officials agreed, gave him the two points and the 9-8 win.

Ohio attempted to challenge that call but was not successful.

“If your finger nail touches for a millisecond, its reaction time. I’m not saying I agree with the rule but that’s the rule,” Dresser said. “If your shoulder, your finger nail, your eyebrow, your eyelash touches it’s two points.”

Coach Dresser talks about the late takedown Colbray earned that lead him to win his match. #CFTV pic.twitter.com/nuWpZq81qR

The next time the Cyclones will see action will be at the Southern Scuffle on Jan. 1 in Chattanooga, Tenn. Iowa State will not return to Hilton until Jan. 13.

“I give us a good report card for the first semester,” Dresser said.