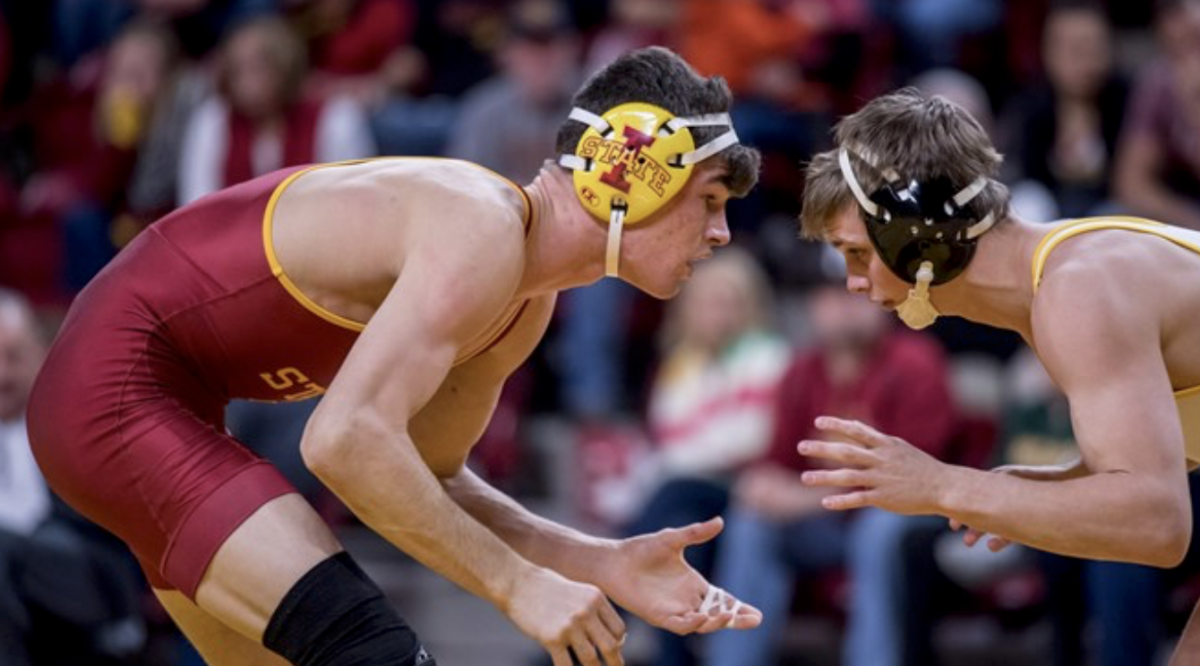 The above is a photo courtesy of Iowa State athletics communications.

AMES — The matchup is set. Kevin Dresser, his staff of former Hawkeyes and of course, the Cyclones will end its regular season facing off against in-state rival the Iowa on Sunday at 2 p.m. (Cyclones.tv).

While it’s easy to get caught up in the hype here, Dresser insists he is thinking about one thing: The big picture.

Iowa State is currently 8-9 overall, which doesn’t look great on paper but is an impressive step forward compared to the 1-12 team that left the mat a year ago.

“As a whole, there’s been a lot of growth.” said assistant coach Brent Metcalf. “At this point in the season you’re feeling a lot better than you did at the beginning of the season.”

The Cyclones have had an inconsistent year, a key element you can find in any rebuilding year for any sport.

“A lot has changed since then, ya know? There’s a lot of good feelings and a lot of uncertainty still.” said assistant coach Derek St. John. “I think there’s a lot more positive thinking now then maybe compared to the first dual of the season.”

The mindset that the Cyclones are bringing into Sunday is to improve on consistency before the Big 12 Championships.

No. 7 Iowa is the toughest team the Cyclones will have face at home this season.

“As an athlete you have to know what you’re getting into,” said Metcalf. “Know there is some pride on the line and that can either help or hurt you and hopefully that helps our guys this weekend.”

Although the rivalry has been rather quiet with Iowa having won the last 13 matchups, a spark was lit after it was announced that four former Hawkeyes with notable careers had been hired to resurrect the Iowa State program.

“You have four of us who wrestled at The University of Iowa who are all super excited to be here,” said Dresser early last month.

St. John, who followed Dresser from Virginia Tech, was very excited to return to a state where wrestling is a big priority and this weekend holds some excitement.

“It feels pretty good. I love being back in Iowa where wrestling is important no matter what side you’re on,” said St. John. “It’s great to be at a place like Iowa State where you have unbelievable support from the fans and the administration.”

Although being Hawkeyes helped shape who this staff is, it isn’t who they are anymore. Walking into this weekend, the are focused on the progress of this program and using every weekend as another opportunity at another shot to find success.

“There might be some lopsided matchups but whether there is or there isn’t, you can still come and battle hard and give forth complete effort as a team and individually,” said St. John. “You can probably walk away, no matter the result at the end, feeling pretty good as long as you go and you battle and you stand there and you fight tooth and nail for all seven minutes of each match.”

Dresser stated last month that he began disliking The University of Iowa in 2006 when Virginia Tech hired him.

“I say that in a respectful way. When you compete at the highest level, you have to respect your opponent but it’s ok to dislike them because that’s your motivation,” Dresser said. “When it comes to game day, I don’t like anybody.”

Hilton Coliseum is expecting the biggest crowd of the season. Over 7,000 tickets have sold compared to the average 3,000.

The staff and team are looking for the atmosphere to positively impact their performance and challenge them in the way they’ve been missing.

“I think it’s a great opportunity for our guys to compete in a semi full arena, one that we want to start gearing towards in the future,” said Metcalf. “Give those Iowa fans that traveled something to stay quiet about”

WRESTLING: Setting the tone for Sunday’s dual vs. Rider