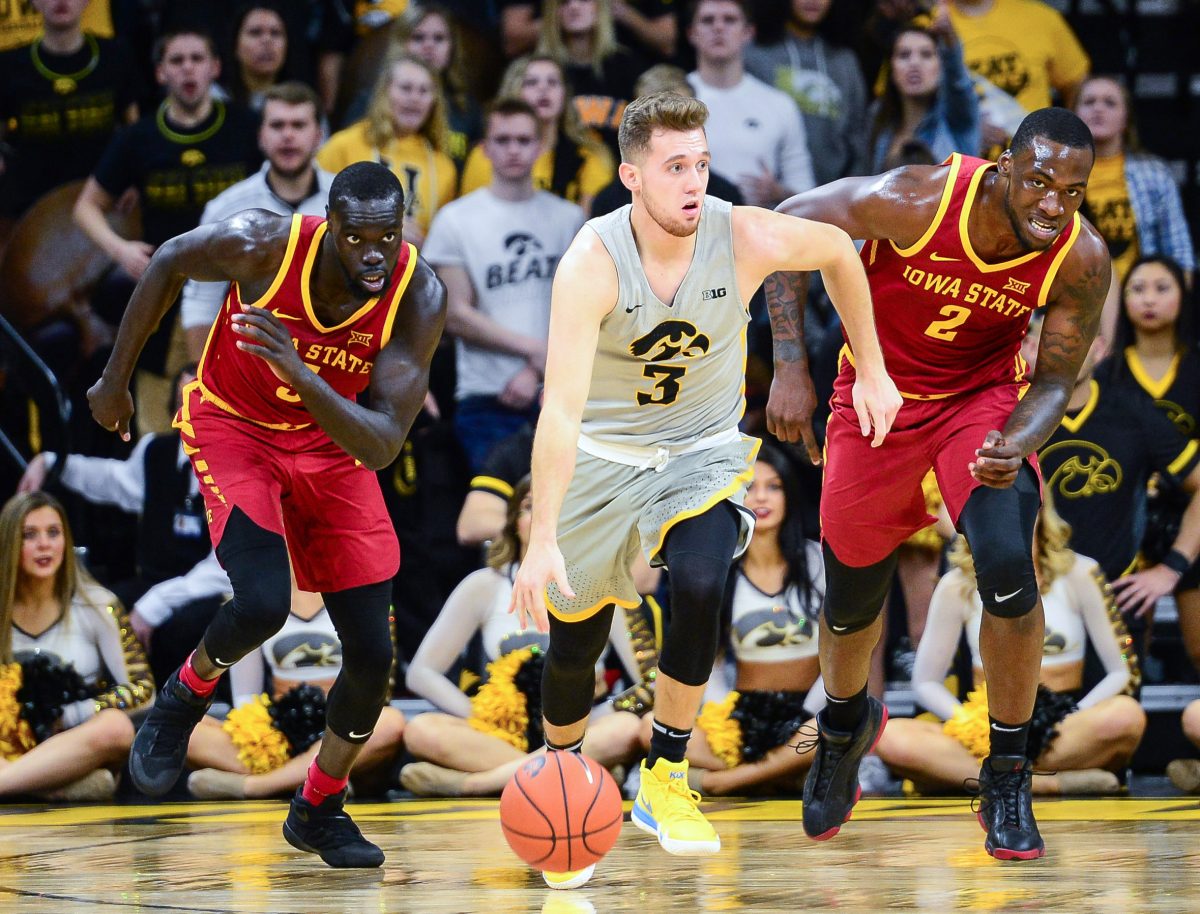 IOWA CITY – I wrote two weeks ago the strength of this Iowa State team would be the energy they play with.

It was their edge during the team’s 7-1 start. It was a big part of what allowed a young and short-handed team to impress during its run to fifth-place at the Maui Invitational. It is needed if the Cyclones are going to be great this season.

It was missing Thursday night at Carver-Hawkeye Arena.

Iowa out-rebounded Iowa State 44-24. The Hawkeyes finished with 23 second-chance points off 17 offensive rebounds. They out-scored the Cyclones 18-8 in fast break points. The edge Iowa State has played with so far this season simply was not there and the team we have all been so impressed with did not seem to make much of an appearance either.

Iowa won the game 98-84. They deserved to win the game. They were the more energetic and, at least on this night in Iowa City, better team.

“We kept competing, but we were definitely not good enough to win tonight,” Iowa State head coach Steve Prohm said. “All the credit to Iowa, they handled us tonight.”

The ball movement Iowa State played with during its first eight games of the season was not there either. The Cyclones struggled to create open looks most of the night and it contributed to their 46.9 percent shooting percentage.

They shot just 26 percent from three and missed the majority of the open looks they did get from deep. Talen Horton-Tucker showed flashes of his talent, but he was inefficient while scoring 21 points on 9-of-19 shooting.

The same could be said of Marial Shayok as he scored 19 points on 7-of-15 shooting. Neither one of them had much success creating for others but that is often the case when the driving lanes they require are sealed because nobody forces the defense to expand by knocking down shots from deep.

“The one thing that we’ve done a really good job of up to this point is the ball really has moved well for us,” Prohm said. “We’ve really shared it, moved it. I felt the ball got stuck a lot. They switched some screens and we were supposed to be slipping everything and we set some we shouldn’t have. But our pace, when you’re getting the ball out of the basket, your pace isn’t going to be as good.”

Iowa turned the ball over 18 times and they led to 24 Iowa State points, but I am not sure how many of those 24 turnovers you could define as forced. This was certainly the Cyclones’ worst defensive performance of the season and it was not even close.

Iowa State got bullied from beginning to end. They allowed Cordell Pemsl to get under their skin in the first half and Iowa maintained an edge in the toughness category until the final horn.

“We are working through some things,” Prohm said. “We got two new guys back. It is a little different, but that is not an excuse. We have played well and beat good teams with the roster we have. As we add guys, they need to accept their roles and buy in. We just weren’t good tonight and Iowa had a lot to do with that with their physicality and size.”

One of those guys the Cyclones have gotten back is All-Big 12 center Cameron Lard after serving his month-long suspension to start the season. He struggled during the brief stretch Prohm put him on the court during the first half.

When he checked in with the Cyclones down 20 points with 12 minutes left on the clock in the second half, the wheels had almost completely fallen off. He nearly became the difference in a comeback. Lard played with more energy on the floor during his roughly 7 minutes of play after the halftime break.

When he checked out at the under-eight media timeout, the Cyclones were down 12. They had all the momentum and Lard’s defense in the paint on Tyler Cook, who was tremendous on his way to a 26 point, 11 rebound performance, was one of the big reasons why.

Lard finished the night with three points, three rebounds and a block before fouling out with 1:21 left in the game. He was the only Cyclone who finished the game with a positive plus/minus. I do not know why Prohm took Lard out at that under-eight break, I’m sure it had something to do with his conditioning in just his second game back, but it still feels like he should not have come off the court considering the way things shifted while he was on it.

“The second half, he was good,” Prohm said. “The first half, he wasn’t engaged the way I wanted (him) to (be). That was one of the reasons I was frustrated with him in the first half and thought George (Conditt) came off the bench and did some really good things for us, but I wanted to give him one more chance and I thought Cam responded competitively.”

At the end of the day, Cyclone fans will have to hope this was a one-off performance, an off night on the road in a tough environment. Iowa State is getting closer to having its full roster again with Lindell Wigginton and Solomon Young inching closer to their respective returns from injury.

I wrote after Monday’s win over North Dakota State, the issue of having to infuse guys back into the rotation is not going to go away. At least there are still a few weeks left before Big 12 play starts.

Iowa State basketball still has a lot of problems left to solve this season. Until Thursday, I never thought toughness and energy would be some of them.

“It’s a good learning experience for us,” Shayok said. “Moving forward, I think we’re going to be in good shape.”