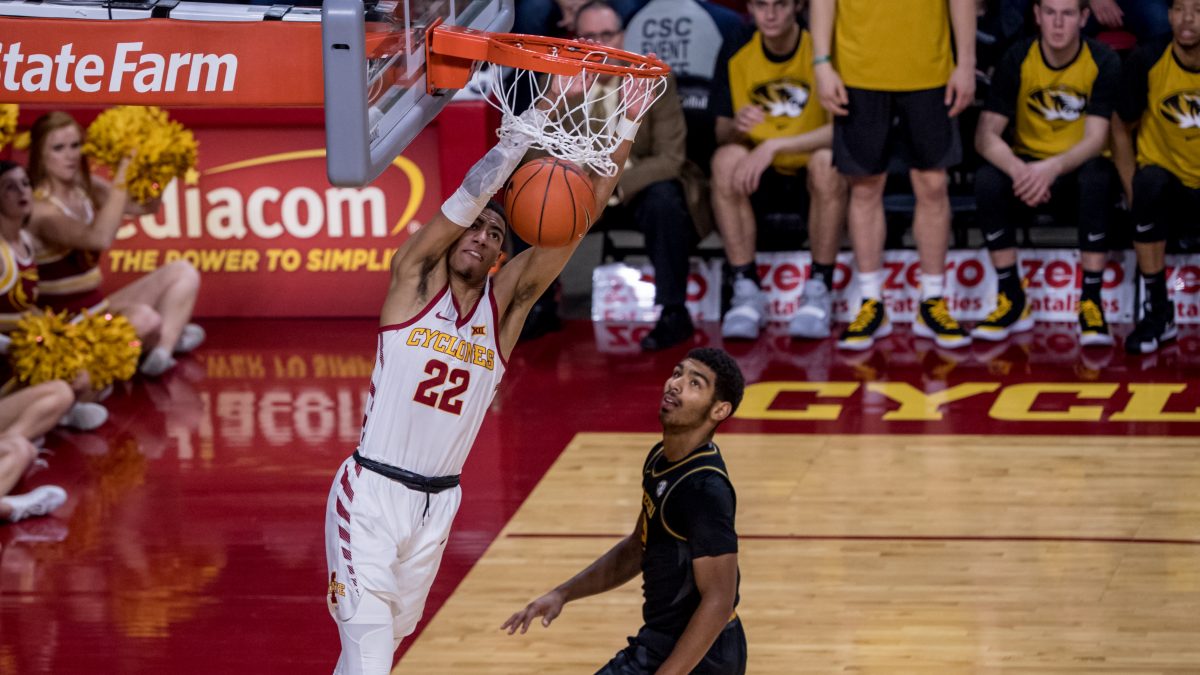 “Good game,” Heft, a former Iowa State point guard, said. “But I still need you to break my assist record.”

Sixteen assists. Heft accomplished the feat on Feb. 5, 1974, against Nebraska. Haliburton told him he would break it eventually. Apparently, eventually is equal to 72 hours later as Haliburton is now Iowa State’s all-time leader in single-game assists after he recorded 17 of them, to just one turnover, in the Cyclones’ dominant 101-65 win over Southern.

“I didn’t mean this game, but I told him I’d break it eventually,” Haliburton said. “Then this morning, me, Marial (Shayok) and Pete (Link) were talking at shootaround and I told them I was going to break it tonight. I was just trying to share the ball and I guess it worked.”

Eric Heft talks about Tyrese Haliburton breaking his record for single-game assists in this CFTV. pic.twitter.com/marXOgm5oO

It certainly worked as Haliburton added 15 points to go along with his record-setting dime dropping for the first double-double of his college career, which is now 10 games old. The Cyclones’ true freshman spark plug has been better than anyone ever expected him to be this early in his career, but this was certainly the cherry on top of his explosion onto the scene.

Jeff Hornacek was never able to break Heft’s record. Nor could Jamal Tinsley or Monte Morris. It was a skinny kid from Wisconsin playing his 10th college game just a few days after learning the record was even held by the man who interviewed him on the radio after games.

“The record’s been there for way too long. It was a one-off,” Heft said of his record-setting performance against the Huskers. “Let’s face it, these guys are better players than I was.”

Obviously, this is not the sort of performance people can expect from Haliburton every time he steps on the court. But, the kid has certainly played himself into a position where Steve Prohm will have a tough choice to make when it comes time for Lindell Wigginton to return from his injury and someone will be forced out of the starting lineup.

Shayok, who scored a team-high 26 points on 11-of-15 shooting, attributed the team’s early energy to Haliburton. His teammates have said all season they feed off the infectious good vibes Haliburton spreads while on the court.

He is purely a kid playing a game he loves, and you can see it every single time he steps on the court.

“If (a game) went 45 minutes, he’d play 45. You don’t take him out. He’s just got something about him,” Prohm said. “(During) the recruiting of him, sometimes you don’t recruit them all, but once I saw him play, there was two or three possessions up and down the floor and you’re like, ‘This kid’s just got something…’ He’s an awesome kid to coach. He just wants to win. He just has something about him. Some guys have got it and he’s got it. It’s an unbelievable honor.”

Haliburton said the title of best assist of the night was a toss-up between a lob to Terrence Lewis, who contributed 15 points on 5-of-6 shooting from the field and 3-of-4 from deep off the bench, and the record-breaker no-look to George Conditt. He set up fellow freshman Talen Horton-Tucker plenty of times as well during the Chicago native’s 17-point performance to round out the Cyclones’ top-scorers.

Few people will remember Iowa State’s dominant win over Southern because it was exactly what was supposed to happen. Everyone who witnessed it will remember Haliburton’s 17-assist performance because he was the only person who saw it coming.

“When we heard 17 (during an in-game PA announcement),” Haliburton said. “It was pretty cool.”