AMES — Coming off of one the most emotional games the Iowa State women’s basketball team will play this season, the Cyclones blew out North Dakota on Sunday.

“That was something our players needed,” Iowa State coach Bill Fennelly said. “When you have a little disappointment, it’s good to come back to a friendly place.”

Iowa State wasted little time getting out to a big lead in its 52-point victory, taking a 24-9 lead into the first break.

The Cyclones had a strong defensive presence on the court that was being paced by senior Bridget Carleton, who ended the day with a career high in steals with seven.

Carleton was matched up with North Dakota’s star senior and number one point-getter, Lexi Klabo. Klabo was averaging 22.1 points per contest coming into the game, but was held to six in large part due to Carleton’s defense.

“[Carleton] asked for that assignment and I thought [she] did a wonderful job,” Fennelly said. “When we took her out [in the third quarter], [Klabo] had two points. For [Carleton] to do that at one end and do what she did at the other was great.”

Carleton finished with a team leading 18 points and was a big reason the offense was moving so well during the first part of Sunday’s game.

The Cyclones utilized a lot of ball movement to get their scorers open and cashed in on 11 assists to take a 52-13 lead into the locker room at halftime.

“The things you need to do to win a game like this, we did early and often,” Fennelly said. “I thought the first half was of the most efficient we’ve played in a long time.”

The Cyclones used some alternative lineups, as one would expect, in the lopsided affair. One of those included starting point guard Alexa Middleton being on the floor at the same time as Rae Johnson, who is a backup in the same position. The lineup didn’t take long to click as right off the bat, Johnson hit a 3-pointer for Iowa State.

“We’re trying to do that more depending on who we’re playing,” Fennelly said. “What it does is give us an two people who have the ability to play point guard, so you have an extra ball handler that can facilitate offense. If people are really into [Carleton] a lot, because we’ve kind of used her in that role, [they’ll be backed off]. To have another ball handler in the game gives us more options. We’ve practiced it a lot. We haven’t used it a lot, but that will be something we continue to [use].”

The win gives the Cyclones their sixth straight victory at Hilton Coliseum going into a game with in-state rival Drake. The matchup will be one of the most intriguing of the home games on the non-conference slate for Iowa State, as the Bulldogs gave No. 2 Notre Dame all they could handle in a game earlier this season.

“[That streak] is huge,” Carleton said. “We never want to lose at home. We have the best fans in the nation and we don’t want to let them down. Last year, we talked about having a losing record at home and I think we took that to heart this year. Being 6-0 was our goal so far this year and hopefully we’re going to go forward with this.”

The home record was something that Fennelly stressed to this year’s team following their 7-8 mark in Ames last season. In fact, it was the first thing Fennelly talked about when the team first met about this year in August.

“Last year was really an odd year,” Fennelly said. “We did not play well at home. We’ve always took great pride in playing well here. It was the very first thing we addressed in August. We wanted to be a team like we used to be where teams don’t want to come in here [and play us].

“Drake is probably the best team that has come into our building this year, so we’ll get to work on them later this week.”d 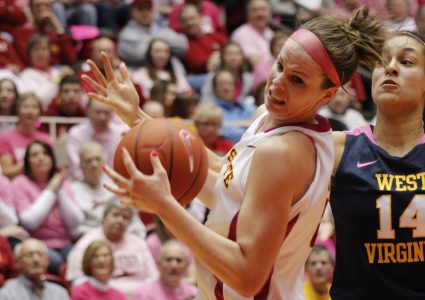