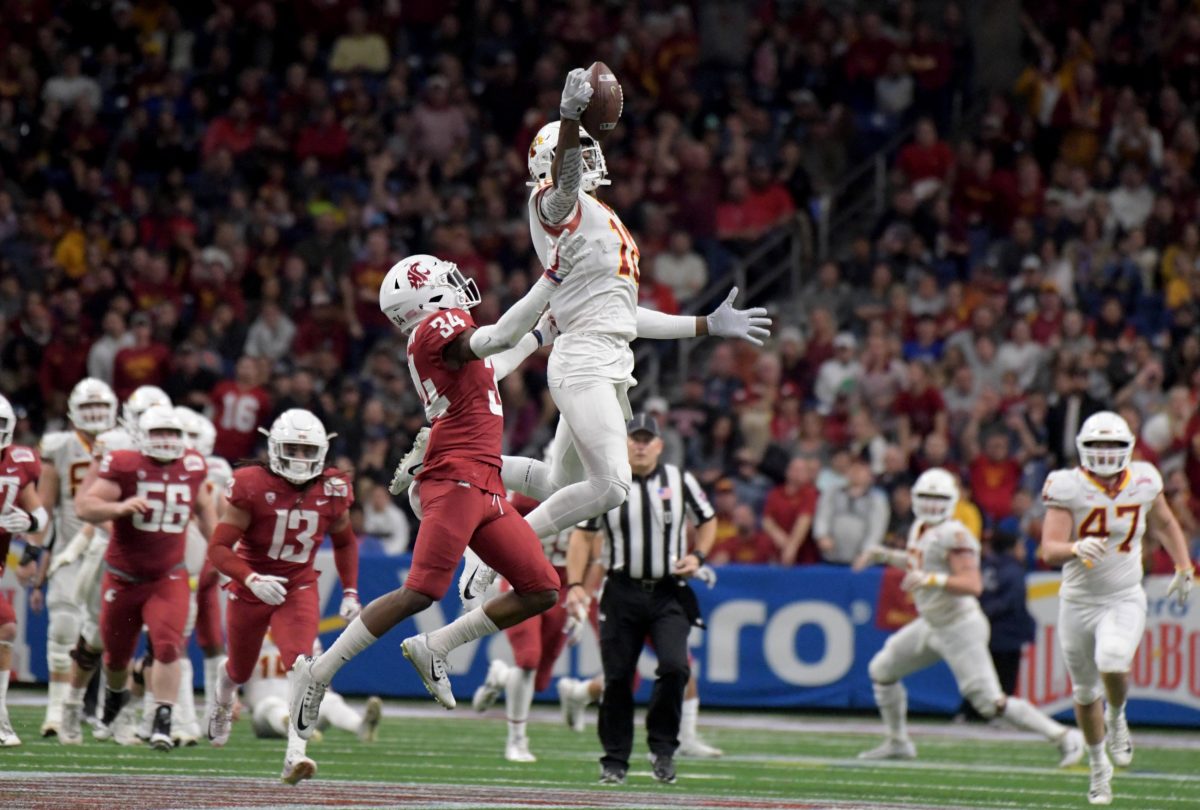 Iowa State’s head football coach was reflecting on an adversity-filled season ending with one last teeth-gnashing dose of it — his No. 24 Cyclones’ heart-wrenchingly close 28-26 loss to No. 13 Washington State in Friday’s Alamo Bowl — and mentioned the team’s 1-3 start.

Campbell called the way his team polished off the regular season with a 7-1 mark down the stretch “gutsy,” and then talked about how many outside observers “wrote us off at 1-3.”

That prompted Butler — who may or may not return for his senior season after appearing on at last one NFL Draft guru’s mock board as a potential first-rounder — to nod affirmatively.

He kept believing. His teammates kept the faith, as well. And potential turned into another eight-win season that could have mushroomed into nine if some questionable calls, seven ill-timed false start penalties, and going minus-two in turnovers Friday night hadn’t doomed the Cyclones (8-5) to a narrow setback.

“I’m really proud of what this team stands for,” Campbell said. “I think if you look at our football team and our football program, you’re talking about a team that — just like you saw tonight — never quits, plays with elite attitude and elite effort (and) is a team that demands to continue to get better.”

That cresting wave of achievement will likely only roll in deeper and stronger when winter workouts begin soon — and won’t be dependent on whether Butler or fellow star junior David Montgomery choose to move on to NFL dreams or remain for one last hurrah as Cyclones.

Butler wanted no part in a question about his football future following Friday’s loss.

Why would he? He hurt along with his teammates.

“I mean, we just lost a game, so it’s kind of hard to even think about going anywhere,” said Butler, who hauled in nine catches for a program bowl-record 194 yards. “I’m just focused on what just happened right now.”

He tied Allen Lazard’s single-season record for 100-yard games set last season by noticing his sixth Friday, and eclipsed 2,000 receiving yards in his career (2,149), becoming the fifth Cyclone ever to do so.

So let’s live in that moment — even with a loss — for now.

As for Montgomery, he trucked, trudged and sprinted for 124 yards and a touchdown. He also caught four passed for 55 yards, but lost a fumble at the ISU 30-yard line early in the fourth quarter that set up the Cougars’ (11-2) winning touchdown.

On replay, it appeared Montgomery may have had his forward progress stopped before the ball was poked loose, but officials saw it differently — as they did a lot of times, obviously.

“Mistakes happen in a football game,” Campbell said. “I believe in our players. I trust them. I love them. I know none of those mistakes that happen (occur) because of lack of trying. So I think we went right back to David and we went right back to some guys early in the football game and you just continue to let your great players make great plays, but mistakes happen.”

Yes, they do. Friday there were just too darn many for the Cyclones to overcome against a Washington State team that set a program record for wins in a season.

ISU outgained the Cougs 515 yards to 327, but deftly attending to the details, as my colleague Jared Stansbury pointed out after the game, remains very much a work in progress.

“I think if you look at the teams that started the football season 1-3 around the country, the teams that’d the ability to recover like this group did, it’s really powerful,” Campbell said. “And I think this group has got a really powerful story. Obviously we came up short tonight and that’s unfortunate, but I think those shortcomings will only guide us going forward.”

That’s true with or without Butler, Montgomery and a slew of seniors who left an indelible mark on this now perpetually-rising program.

That includes linebacker Willie Harvey, who was ejected in the first half for targeting, but finished his career in the top eight all-time in tackles for loss and sacks.

It definitely includes lockdown cornerback Brian Peavy, who consoled Harvey after he was forced to leave the game, and spoke powerfully about what his time at ISU has meant to him.

“First off, definitely not settling for less,” Peavy said when asked about the seniors’ impact — and the program’s impact on them. “In my years here, we had two-win, three-win seasons and now we’re kind of changing the culture of the program. So what I want to leave as my legacy is basically ‘we before me’; putting your teammates before yourself and just serving. I think I did a good job with that.”

So did everyone else who may have played their last game as a Cyclone.

“Gutsy” dudes, all of them. Guys who cared deeply and never gave up — just like the fans who cheer them on.

“They have been so loyal to us, not only through the good times, but through some of the tough times and what an honor to be able to put them on this stage and be able to be in this environment,” Campbell said. “They were incredible tonight. We’re beyond thankful for them and their support for us.”