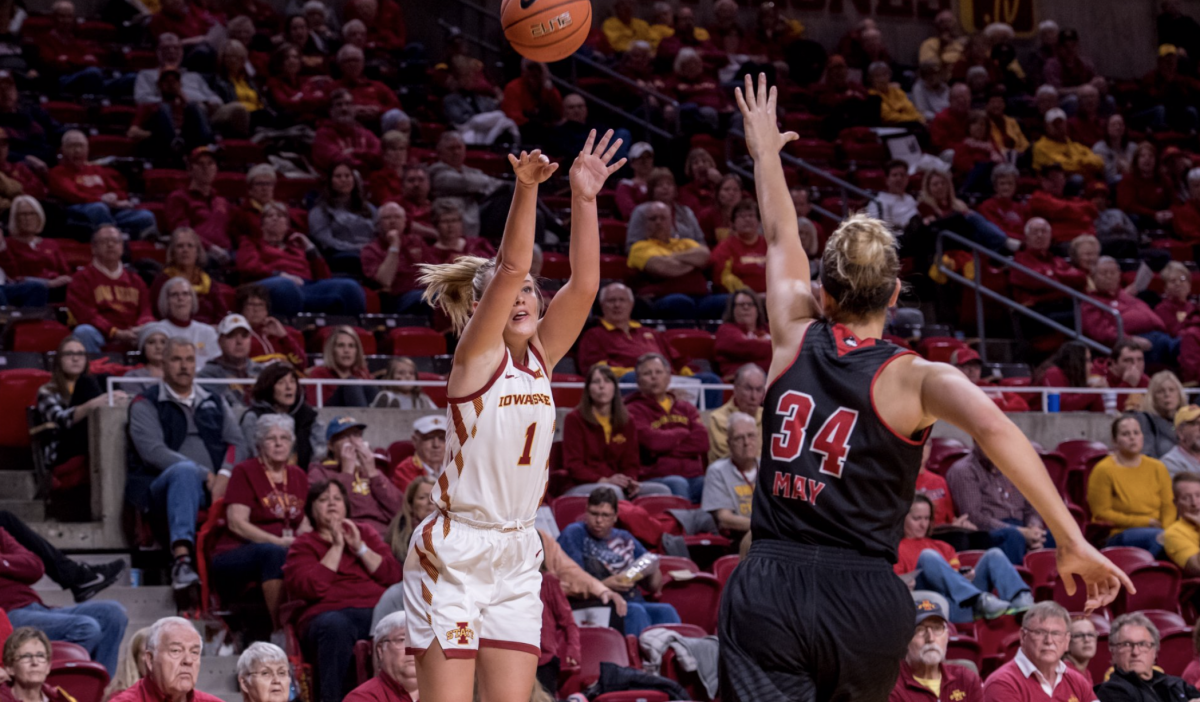 AMES — It wasn’t the prettiest game that the Iowa State women’s basketball team has played this season, but it definitely was the closest.

After holding off a late comeback, the Cyclones defeated Northern Illinois 70-60 in front of a loud, 9,266- person crowd at Hilton Coliseum.

Iowa State had been comfortably ahead by double digits throughout most of the day, until three turnovers in the middle of the fourth quarter turned into a 7-0 Northern Illinois run and the Huskies all of the sudden trimmed the lead to eight.

On the ensuing possession, however, Madison Wise buried a 3-pointer to put Iowa State’s lead back to 11, and Bill Fennelly credited her with essentially the game-clinching shot.

“She maybe hit the shot of the game,” Fennelly said. “I mean they got to eight and everyone’s wobbling. She hit that three and everyone could breathe a little bit.”

Wise was tasked with guarding arguably Northern Illinois’ best player in senior forward Courtney Woods. Woods was coming off a 38-point performance in the Huskies first-round WNIT win against Yale, but on Sunday was held to 10 points and no assists.

“I thought [Wise] was maybe, at both ends of the court, the best she’s ever been [at Iowa State],” Fennelly said. “To ask someone to guard that kid as hard as she had to and still get 12 points and six rebounds in 36 minutes – that’s a great effort.”

Bridget Carleton led the Cyclones in scoring, rebounding and assists as she tallied 21 points, 13 rebounds, and six assists in the victory. They’re numbers that Carleton doesn’t seldomly put up, but the difference is the players around her.

“It’s great,” Carleton said. “It’s fun to play with these girls. We can all shoot the ball. We can all put up points and hit three pointers. That’s pretty fun when I’m attacking and I have three people at the perimeter that can knock down three’s.

Carleton had a pretty telling quote about how confident she is in her team before the game started on Sunday too.

“They can’t guard us,” Carleton said. “There’s no way they can stop us with all of our shooters, and our post players. It’s just a fun team to be on.”

Speaking of weapons, Iowa State’s coordinator of the offense in Alexa Middleton is still being limited to under 20 minutes per game – which was expected. However, the backup point guard spot that was planned to be run by committee has gone a different direction so far this season.

Rae Johnson was the only player Cyclone fans saw at the 1-spot on Sunday and she played more minutes (23) than Middleton (17).

Though, Fennelly said that that was just the virtue of today’s game specifically.

“It was just kind of the flow of the game,” Fennelly said. “I think they both did a good job. Rae knows our system. Rae is a solid defender. Like [Middleton], they both have a really high basketball IQ.”

Overall for the Cyclones, Fennelly seemed pleased by his team’s performance in the first three quarters. The only downside of the day was the nine points Iowa State was held to in the fourth.

“You’re going to be lucky to win games and score nine points in the fourth quarter,” Fennelly said. “Our decision making wasn’t what it should be. We were trying to force the ball a couple of times and we got caught trying to dribble the ball into the lane. It was good defense by them combined with some poor decision making at critical times [by us.]”

Fennelly knows that Iowa State can’t do that again, especially with the competition heightening as the preseason WNIT rolls on.

With the win, Iowa State will advance to the semifinals of the tournament and will face Auburn, who knocked off host-team New Mexico 79-76 Sunday afternoon.

The game will again be played on Tuesday at Hilton Coliseum and will tip off at 6:30 p.m.