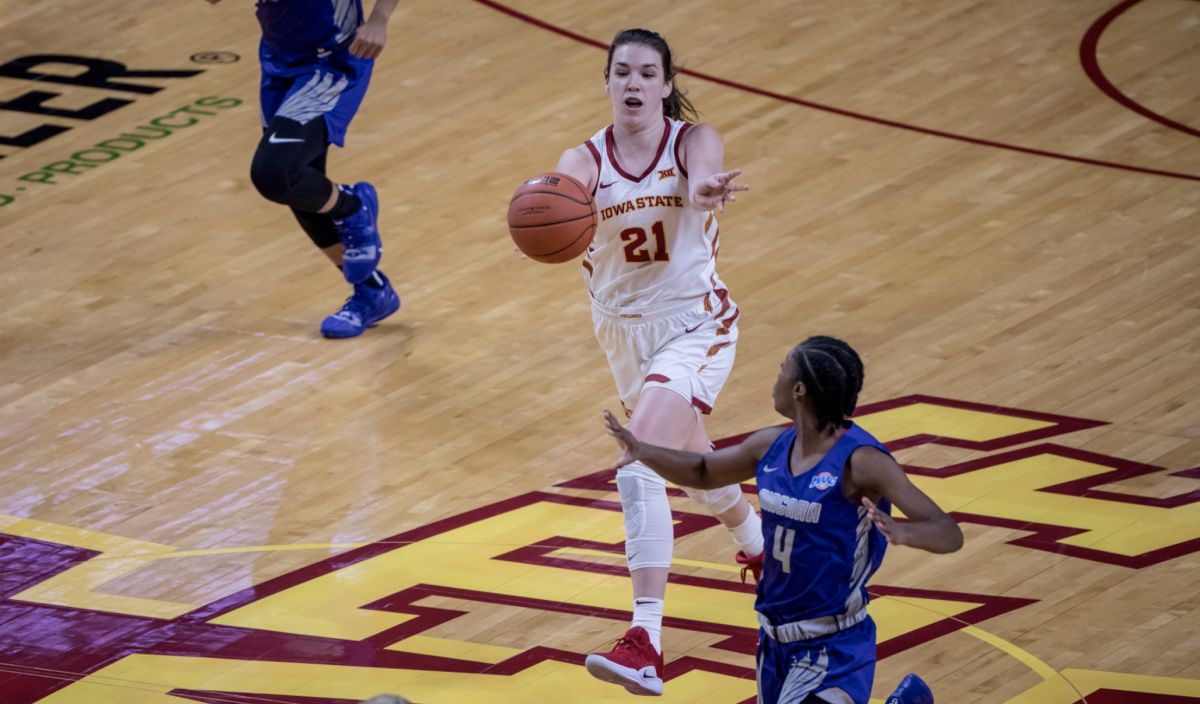 AMES — For an arena that consistently ranks in the top five in attendance numbers across the women’s basketball nation, it doesn’t usually remain very quiet. However, on Friday, with a barrage of elementary students in the building on field trips, the high energy feel was at a constant.

The Cyclones fed off of it from the start in a 95-35, blowout win over Niagara.

Before the game tipped off, senior forward Meredith Burkhall said to her team, “Let’s make them call a timeout early,” and that’s exactly what the Cyclones did.

The defender on Ashley Joens fell down after the tipoff, leaving the freshman wide open for a 3-pointer. Shortly after, Madison Wise hit back-to-back free throws and a lay in on the ensuing possession to force Niagara to take a timeout two minutes into the game.

Joens remained hot all afternoon. The reigning Miss Iowa Basketball finished 6-for-11 from the field while connecting for 16 points and 3-three pointers.

It was quite the turnaround from her performance in the two exhibition games, where Joens shot 3-of-11 from the field and 0-for-7 from downtown.

“I felt more comfortable and the coaches and my teammates encouraged me to keep shooting it,” Joens said. “That helped a lot.”

Joens finished the game leading the team in scoring, tallying 16 points in her 22 minutes of play.

The transition from the first two games was night and day for Joens, who is under a bigger spotlight than most freshman are in the Iowa State program.

“She’s someone that’s [in the gym] early and often,” coach Bill Fennelly said. “She loves the game. She loves to play. She understands that the spotlight is on her a little bit more than most freshman because of where she is from and the notoriety she’s gotten even before she’s set foot here. [Joens] is going to be just fine.”

Thanks to the play of Joens and others, the Cyclones opened up a big lead early and pulled away, allowing them to comfortably experiment with different lineups as Fennelly has alluded to recently.

One of the lineups that’s been talked about most is the backup point guard spot for Alexa Middleton – who is being limited to 20 minutes per game after a leg injury earlier in the year. Fennelly says the spot will be played by a committee, but on Thursday, it was Rae Johnson who got the call in the more meaningful minutes.

“I thought they all did okay,” Fennelly said. “We went with [Johnson] early because they were in a zone and Rae shoots it better than the other two. Then we went to [Carleton] because we wanted to experiment with it. As the score got out of hand, we couldn’t do it in the fourth quarter, we had to get her out of the game.”

Johnson finished the game 1-4 from the field shooting exclusively three pointers. However, she did finish with a +/- of 33, good for fourth on the team only behind Carleton, Joens, and Kristin Scott.

Nia Washington and Jade Thurmon were the two other players that Fennelly mentioned involved in the backup point guard committee. Both got some playing time in the fourth quarter, each logging 10 minutes.

“I thought they all did some good things,” Fennelly said. “Obviously, [Middleton] is our starting point guard, but the others have to find their time and niche when they can impact success. They all have a different skillset, but they have to be ready when it’s time.”

With the Cyclones playing in an early season tournament format, Fennelly is paying close attention to the minutes his players are going.

Carleton played the most on the team with 29 minutes, though Fennelly had no concerns that the senior couldn’t handle the large amount.

The rest of the team was all held to under 22 minutes.

The Cyclones will take on Northern Illinois – who beat Yale on Thursday – in the second round of the Preseason WNIT on Sunday at Hilton Coliseum. The game is scheduled to tip off at 2:00 p.m. and will be televised by Cyclones.tv.

“Our kids have played enough games,” Fennelly said. “They know what’s coming on Sunday. [Northern Illinois] is a lot tougher opponent and a good team.”