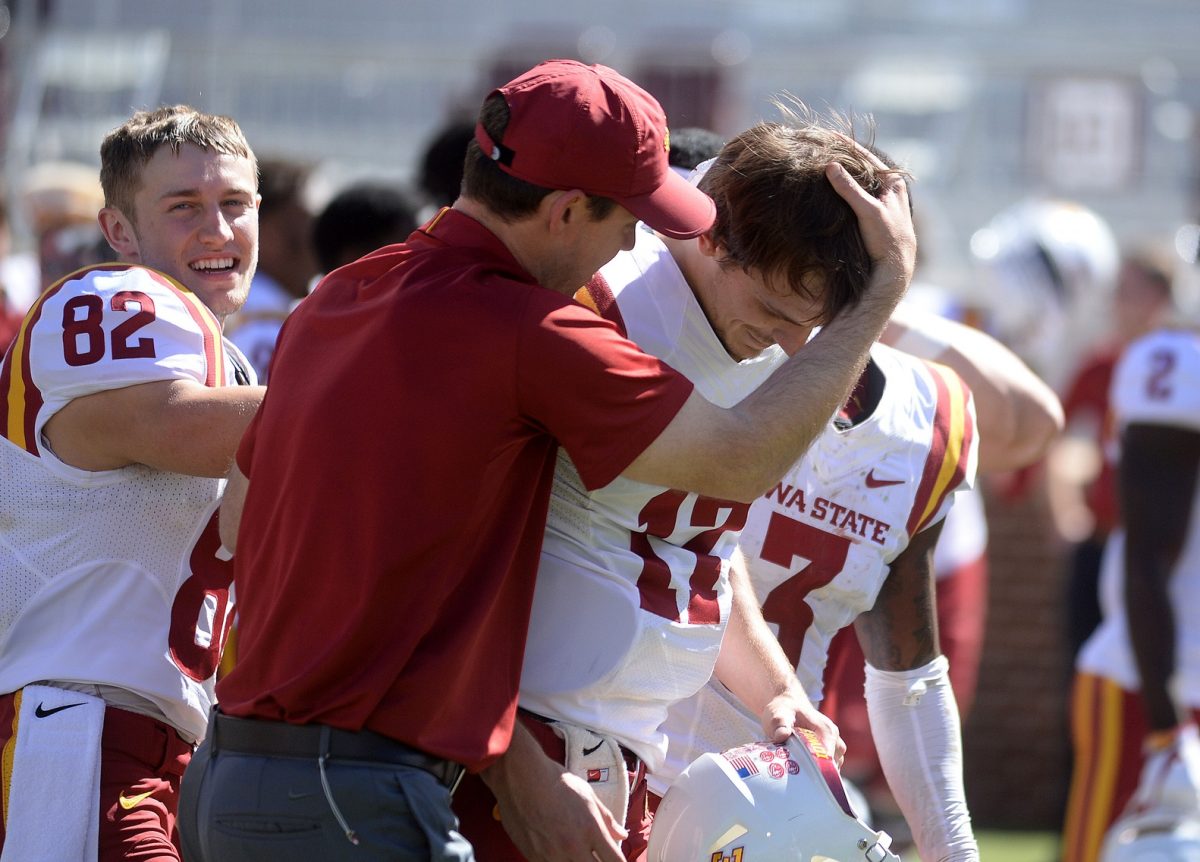 AMES — “We’re not promised our hopes and dreams.”

Some weeks, nothing good happened. No progress. No hope.

Kempt had nearly resigned himself to not even being healthy enough to play again for the Cyclones — and devised an as-if action plan to ensure his leadership would continue to have a broad impact on the program, whether he could once again set foot on the field, or not.

“I was voted captain,” Kempt said. “I’ve been here forever. These guys look to me to be a leader. So what can I do to help this team out?”

By being the same old, Kyle, that’s how.

Kempt — who was granted a sixth season of eligibility entering this season — will be available off the bench along with freshman Re-al Mitchell in Saturday’s 11 a.m. (FSN) Big 12 game at Kansas.

He says he’s back to 100 percent in terms of health, but the slog back to that salutary status has been as taxing mentally as it has been physically.

“That kid’s weathered as many storms as anybody I’ve been around,” ISU receivers coach Bryan Gasser said.

Think of all the dreadful what-ifs that could have cropped up after then-then-starting QB Jacob Park’s abrupt departure from the team before the Oklahoma game last season.

Kempt kept his cool. He readied himself for his first true shot to demonstrate his abilities — and helped steady the team in a time of tumult. Then, he led the Cyclones to a program-changing win over the Sooners rooted in sheer determination, quiet confidence, and collective trust.

Kempt held fast to those qualities after suffering the MCL injury in the season-opening loss at Iowa. He continued to round up all the other quarterbacks for film study sessions. He prepped then-starter Zeb Noland (who has since left the team and intends to transfer), then shifted gears to guide true freshman wunderkind Brock Purdy, who will make his third straight start for the Cyclones (4-3, 3-2) against the Jayhawks. (3-5, 1-4) in Lawrence.

“A tough injury to come back from,” Campbell said of Kempt’s long rehab process. “Working to get himself back to 100 percent and you could either sulk about it, be disappointed about it, but all Kyle did was pour himself into Brock. So, I think the greatest thing that I’ve seen is that leadership and ownership in team. Brock would tell you, Kyle’s as important to his success as anybody, so really fortunate to have a leader like that in our football program. Kyle’s been nothing short of exceptional for us.”

ISU enters Saturday’s game as a 14.5-favorite. Purdy — whose passer rating of 191.66 ranks second in the Big 12 to Oklahoma’s Kyler Murray — is poised to move to 3-0 as a starter, just as Kempt did to help propel the Cyclones to its first eight-win (or better) season since 2000.

But Purdy distinguishes himself by flashing potent dual-threat capabilities, which have been on full display as he absorbs hard hits by either firing from the pocket, or scampering downfield on improvised and/or designed quarterback runs.

“I don’t know how many roughing the passer calls there have been since he’s been in at quarterback, but I know there’s been a handful of them,” Gasser said of Purdy. “There’s been a couple reviews for targeting on him. That kid’s been hit pretty good a couple times and you see him peel himself up, he pops off the ground and shakes it off and goes on to the next play. So you’ve got to give that kid a ton of credit. You ask about toughness … the kid’s definitely got some toughness and grit to him, for sure.”

A lot of that’s innate. A lot also came from Kempt, whose career has met obstacles at every turn along its way. Yet he still finds a way to course-correct, often against long odds, to maneuver toward his hopes and dreams with unflinching confidence — whether he’s playing or not.

“I don’t think it’s over in any regards,” Kempt, who fittingly plans to be a coach someday, said of his playing career. “We have so much playing time left the in rest of the season. I don’t know if I will play in the rest of the season. I understand that completely. The biggest thing for me is I was able to come back and able to get to this point again and be such a big influence on this team. That’s the big thing for me. Even if it’s not on the field, I want to help this program as much as possible. And I want my influence to be felt for years to come. Through the quarterbacks, through the rest of the team, I want to be that leader. That’s been really important to me.”