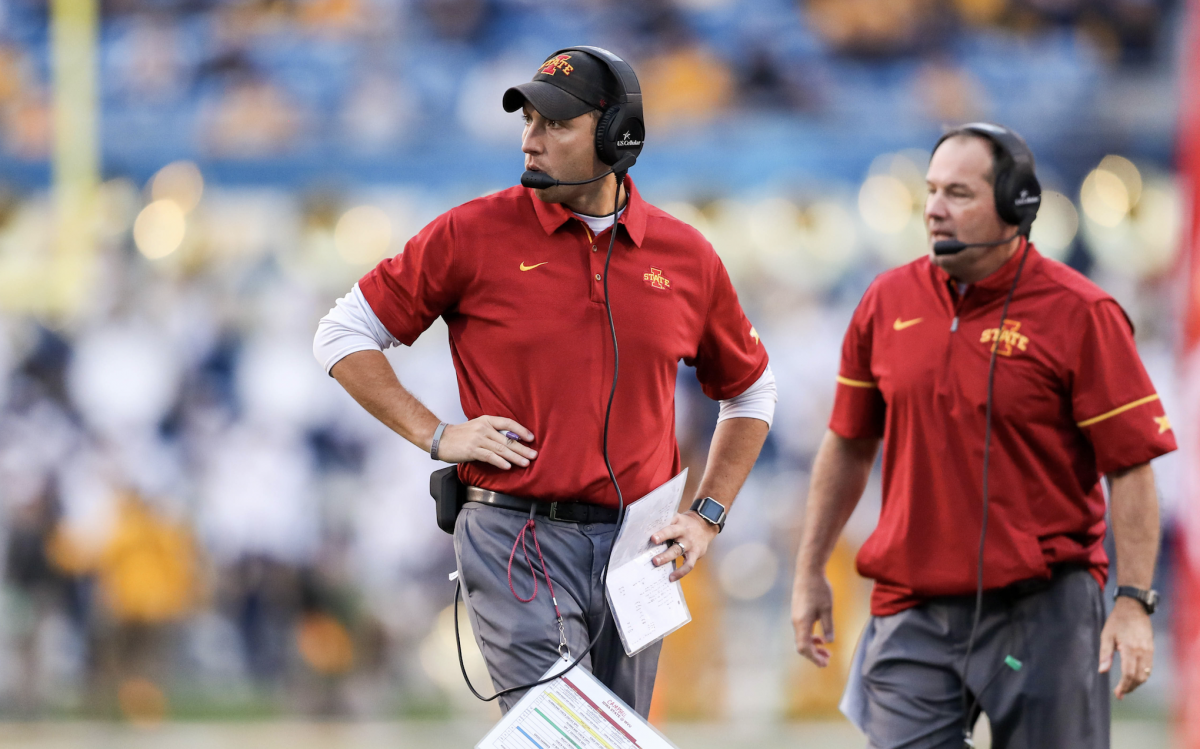 You can spin it any way you want to.

Matt Campbell chooses to not view it from either side. He would have preferred to play the entirety of the Cyclones’ season-opener against South Dakota State which was canceled just short of five minutes into the first quarter, but those five minutes still have value for the team moving forward.

“I really think at the end of it you want to play,” Campbell said on the weekly Big 12 teleconference on Monday. “You have every year, every season, no matter who you are and what you are, the more you play, the more you start to really hammer through the fundamentals, details and the consistency of play that you have. I certainly think getting to play a game, no matter who sees it or what they see, I don’t think that has much bearing on anything, but I do think fundamentals, details, execution, those are still what win sports and certainly win football games. Again, I would have loved to have the opportunity to play an entire football game. I think our football team needs that and needs to do that, but I think whose got the advantage, what advantage is there, you could spin it either way.”

“But I really think if you ask any football coach, you want to play and you want to have the ability to start to build your fundamentals, habits, see what your team looks like under a 60-minute adverse situation. So certainly a unique situation that we’re in right now.”

While the Hawkeyes left week one feeling good after overcoming a slow start in order to dispatch Northern Illinois 33-7 at Kinnick Stadium, the Cyclones left the season’s opening week disappointed their fast start couldn’t manifest itself into further success.

Regardless, Campbell and his staff are stressing the importance of moving forward. Even though Saturday night at Jack Trice Stadium was weird, there are still plenty of challenges that lie ahead for the Cyclones.

“I think the only thing you learn, and every team is different and every situation is certainly different, but I think you learn to keep your composure,” Campbell said. “Such a unique situation and your team is ready to play, you’ve actually started the game, you’ve got into the game and the emotions of, No. 1, wanting to play and the emotions of not being able to play, still takes an emotional toll, I think, on your football team. I think really trying to get your kids back as soon as you can. Understand that you can’t control what just happened and you get back to the reality of it’s the next situation. It’s just another challenge for any football team that had it happen to them.”

“That adversity is coming somehow, someway. In our sport, we have no idea how it’s coming, but how you handle it really defines who you are. I think that’s the challenge and the challenge for this team come this week.”

*** Campbell said that junior offensive lineman Julian Good-Jones is expected to return to the starting lineup on Saturday against the Hawkeyes following serving a one-game suspension for a violation of team rules.

“He’s certainly a very capable football player. Julian’s had a really good offseason for us,” Campbell said. “He had a great year for us a year ago. Certainly, a guy that is definitely one of the best five offensive linemen we have. I would expect to see him back in the starting lineup somewhere. Now where that is, I think we’ll take this week and try to make a really good decision on that aspect of it.”

*** Campbell said he does not expect the cancelation of Saturday night’s game to impact their preparations this week.

“I don’t know who if it changes us too much really,” Campbell said. “I think the reality of it is it gives us another day to kind of get ourselves healthy. Certainly allow us to get our guys in here and study the film that we were able to produce from Saturday. Then also try to get ourselves a day where we can really focus on our bodies, physically and mentally, getting ourselves ready for obviously another big challenging week for our football program.”

*** Campbell said the position battles at mike linebacker and kicker are not yet settled despite Mike Rose earning the start at mike and Connor Assalley taking the season’s first extra point against SDSU.

“I think I was saying on some of those battles even going into game one and the early part of our season that I still think there’s some fluidity to who and what,” Campbell said. “I think we feel really confident in those guys at least at the beginning piece of this, but I don’t think anything is settled right now. I do think a little bit of that is a tribute to our depth and our football team and our football program. You want to see these guys compete, especially some young guys, compete over a period of time, especially in a very competitive environment and obviously we’re going to see that here the rest of the way.”

“Wow, I’ve got a lot of respect, obviously, playing these guys the last two years,” Campbell said. “The motor, the big plays, obviously, getting the (AJ) Epenesa kid last year, adding to the success of that defensive front, but their two starters, the amount of big plays and game-changing plays those kids have made during their careers I just think is exceptional. They’re entire defensive front fits that mold, but especially at that defensive end position. I’ve really got a lot of admiration and respect for those two young men. They’ve been anchors to the success of that football program.”