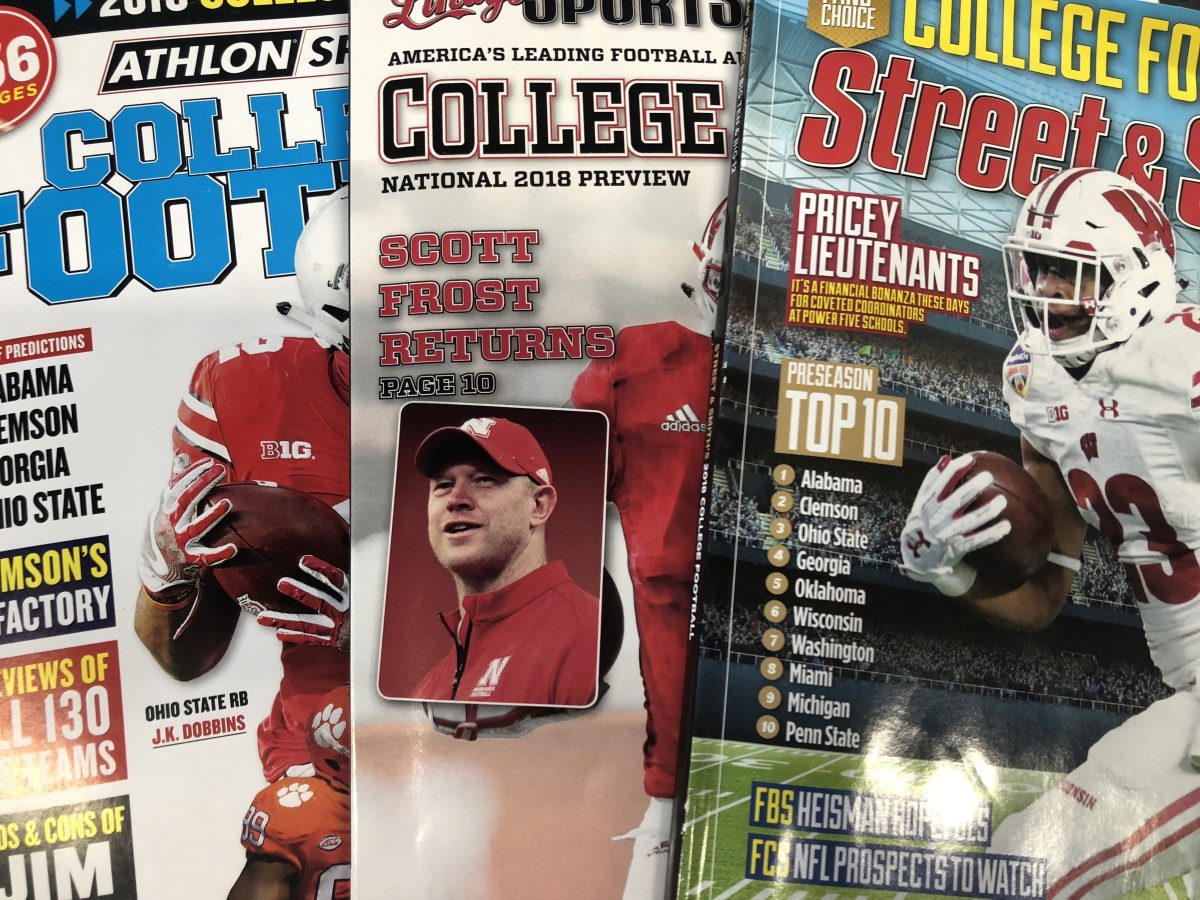 For as long as I can remember, one of my favorite things each summer has been breaking open the college football preseason magazines to find out where the “national experts” have slated my teams.

In fact, when I was at my parents’ house last month, I stumbled across a preseason magazine I made myself when I was in middle school. That was during my “read the ESPN College Football Encyclopedia like it is a Harry Potter book or something” phase.

I was a weird kid as best represented by the fact that I carried that encyclopedia with me everywhere for a several months span in early-2007, including an AAU basketball tournament where I would read sections of the book in between games.

Hold up, how did I get here? Oh, yeah, preseason magazines. Okay, getting back on track, I have procured three of this year’s preseason magazines, Athlon, Lindy’s and Street & Smith’s, and scoured them for any and all Iowa State mentions.

Here’s what I found, starting with Athlon.

Of the three magazines, this is probably the one that shines Iowa State in the brightest light. The folks at Athlon projected the Cyclones to finish 7-5 and one spot behind Oklahoma State in the league’s standings.

One of my favorite things Athlon does each year is their Athlon Awards for best position groups nationally. The Cyclones are represented twice in those rankings with the running backs, led by David Montgomery, coming in at 12th and the linebackers, buoyed by Willie Harvey and Marcel Spears, slated at No. 19.

Iowa State also got a great deal of love in the publication’s Big 12 unit rankings with their highest rating coming at the linebacker spot where the Cyclones are No. 2 in the league. The quarterbacks and running backs both come in third, helping the Cyclones to an average unit ranking just a little bit above four. Hard to complain too much about that, in my opinion.

Brian Peavy is tabbed as a third-team All-American selection and leads a group of nine players selected to the publication’s All-Big 12 teams. We reported on those selections a couple weeks ago and you can check out that full article right here.

The Cyclones’ contests against Oklahoma (Sept. 15) and West Virginia (Oct. 13) are both included in the magazine’s Big 12 games to watch.

One of the most intriguing parts of the magazine is this quote from an anonymous opposing Big 12 assistant coach.

“First time I met Matt Campbell I was blown away. He’s just such a sharp guy, he gets it. I say this knowing I have to coach against him every season.”

Safe to say, Campbell’s colleagues have taken full notice of what he’s been able to do during his first two seasons in Ames.

There was inevitably going to come a time in this article when I get a little bit heated and tell you about all the bad things one of these magazines did. That time is right now and I’m just giving you fair warning so you can prepare yourself if you have a tendency to become heated about irrelevant things like college football preseason magazines as well.

I’m not going to pretend to know everything about running back play or the 10 guys ahead of Montgomery on the list. But, I will say that if there’s a choice between Montgomery and probably seven or eight of the guys ahead of him, I’m taking Montgomery and I’m confident my rushing attack will do pretty well.

But, wait, there’s more. Iowa State does not have a player on Lindy’s first-team All-Big 12 projection. I can almost understand Montgomery not being there. They had Rodney Anderson (Oklahoma) and Justice Hill (Oklahoma State) higher on their national running backs rankings so whatever. It wasn’t that unexpected.

Not seeing Brian Peavy’s name on the first-team was a little more unexpected when you consider he was a first-team selection following last season as well. It was even more unexpected to see his name spelled “Brian Peavey” on the second-team list, which also included Montgomery, sophomore tight end Chase Allen, junior defensive end JaQuan Bailey and senior linebacker Willie Harvey.

Again, the Cyclones have two games listed on the magazine’s Big 12 games to watch (which Lindy’s actually calls “The Big Ones” like they’re 25 ounce cans of Busch Light), but they’ve included the tilts with Iowa (Sept. 8) and Texas (Nov. 17) rather than Oklahoma and West Virginia.

They’ve listed JUCO transfer safety Greg Eisworth as the program’s top newcomer. Not much of a surprise there since Eisworth is probably the newcomer who will fill the biggest immediate role on either side of the ball for Iowa State.

Within the team profile, here is what the publication has pegged as the Cyclones’ primary strengths…

“Montgomery is an elite back — and could be more productive if the offensive line improves as expected. (Kyle) Kempt is a proven leader in terms of canniness, calm and precision passing. The Cyclones’ defense held all but one Big 12 foe to at least 10 points below their season scoring average last season.”

And their potential problems…

“Iowa State leaned heavily on its defense last season, and it responded. But it must replace both starting safeties and its MIKE linebacker. The offensive line is building skill and depth but has been below-average to mediocre in the past several seasons.”

If you can’t tell, I’m ready to be done thinking about Lindy’s.

To me, those both seem like things that should be integral parts of a college football preseason magazine. Alas, I’m not the publisher of either one and they probably couldn’t care less what I think since I’m reading and writing about their magazine anyway, which leads me to think this all might have been a trap.

“The Cyclones stunned the nation last season with victories over top-five foes Oklahoma and TCU in a three-week span. Everything is upbeat about the ISU program under Matt Campbell these days.”

“The third-largest stadium in the Big 12, it’s often filled and loud.”

Street & Smith’s only does a Big 12 first-team projection. Chase Allen and Brian Peavy (name spelled correctly) are the only Cyclones listed. I’m not even going to go back into the David Montgomery thing again because I feel like I’m being trolled and usually the best thing to do with trolls is not engage them.

I think the thing I learned most from doing this was that Iowa State has not garnered the level of national respect it feels like they have from the inside looking out. I’m not really going to question their national rankings or Big 12 projections just because I think they’re all within pretty realistic ranges.

I’m more annoyed by the lack of respect for what Montgomery has been able to do behind a mediocre offensive line during his first two collegiate seasons. I’m annoyed that a national magazine can’t correctly spell the name of a player they’re putting on their All-Big 12 team. I’m annoyed that every year I open these magazines hoping to see some serious respect for the Cyclones and every year I close the magazines annoyed.

Most of all, I’m annoyed we have to wait more than two months to watch college football again.