Lindell Wigginton’s NBA Draft potential may have taken a hit when he did not receive an invite to the NBA Draft combine later this month, but Steve Prohm is excited for the opportunity ahead of his freshman point guard.

Prohm said at Friday night’s Coaches Vs. Cancer event in Des Moines he has heard from 10-to-15 teams regarding Wigginton’s professional prospects. The 6-foot-2 Canadian will start the process of working out for NBA teams in the coming weeks.

“This is great for him. It’s a great opportunity for him to get in front of NBA GM’s, NBA scouts, NBA personnel, to showcase his talent, his skill,” Prohm said. “I’m excited for him and his family to go through this process, learn, get better then whatever decision that he and his family decide on, I’ll support 100 percent. He’s super talented. He’s a high character and the sky is the limits. I’m really excited about whatever decision he makes. If he comes back to school, let’s roll and do great things together. If he decides that he has a chance to move on, I’m going to support him and I’m going to pump him up as much as I can when I talk to people and they call. The one thing he does is he has a great ability to put that basketball in the hole. He can score at all different spots. He can score in the paint. He can score from three. He can score from mid-range. He’s one of only two players, Kevin Durant and him, 65 threes and 40 percent or better and average 16 or more points. Terrific freshman year. The challenge if he does come back is now let’s be part of something special and take your game to another level. I’m excited to see what transpires this month for him.”

Wigginton, who averaged 16.7 points, 3.7 rebounds and 2.8 assists per game during his freshman season, declared for the NBA Draft without an agent in late March. He will most likely return to Iowa State for his sophomore season, but a guarantee for being draft could certainly change that.

As it stands now, Prohm will just be behind his freshman point guard regardless.

“If he can, it would be a great opportunity for him to go head-to-head with some really, really good players,” Prohm said about Wigginton finding his way into the combine as an alternate. “I think he’s just really excited about the opportunity.”

Iowa State freshman center Cameron Lard has been in the news on multiple occasions over the past several weeks following reports of him receiving a citation for possession of paraphernalia in February surfaced late last month. His run in the headlines continued earlier this week when it was reported he was cited for being underage in a bar.

“Obviously, he hasn’t made great decisions,” Prohm said. “I’m not going to sit here and make up different excuses. He hasn’t made great decisions. I talked to Cameron yesterday, he’s got to make better decisions, he knows that. He knows the standards for our programs. On the other side is I know my relationship with Cameron and I know I want to help and invest in him. He’s young, he’s immature, you can only keep saying that for so long. I want to help impact him and help change him. He’s got to change his habits. He knows that, we talk about it all the time. Hopefully, there’s a good story for him out there to catch. I think there is or else we would move on. But he’s got a chance to do some really good things and I want to see him through them.”

At this point, Lard’s status with the team has not changed. 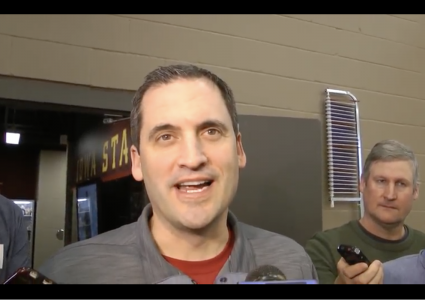