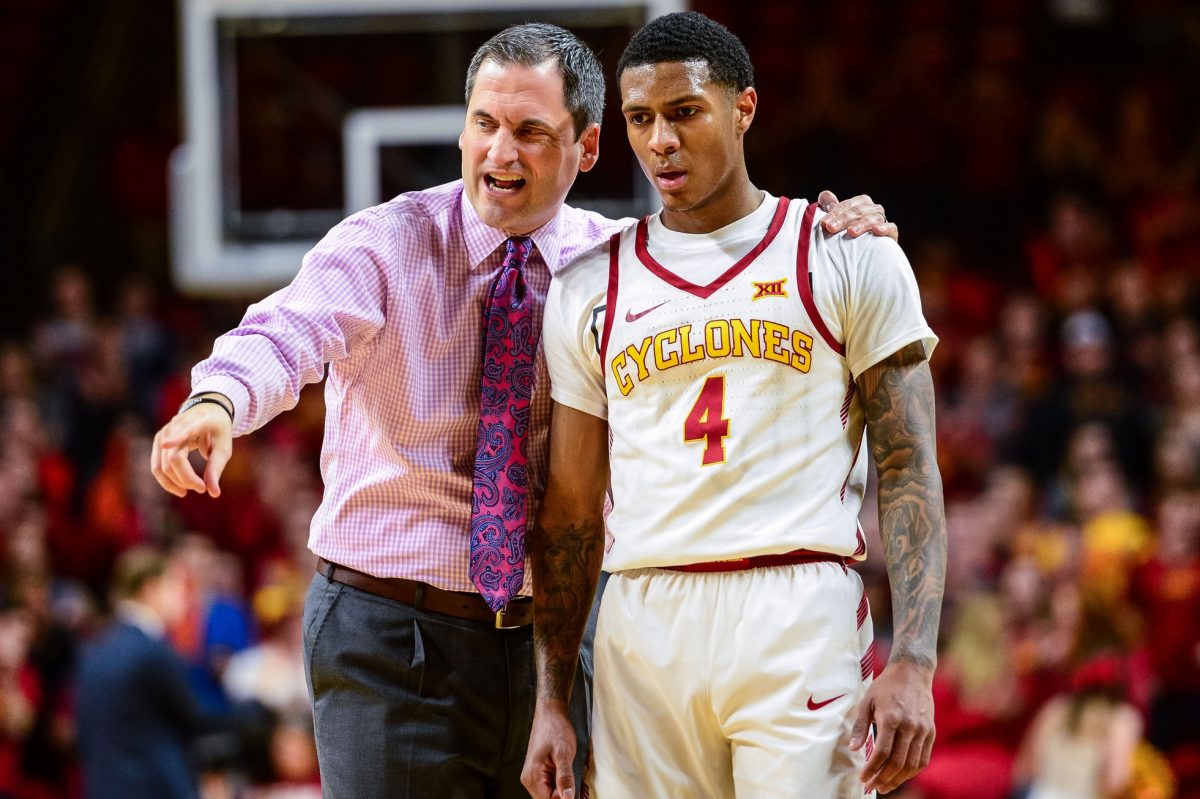 KANSAS CITY — These guys don’t look like they play for a team that just finished last in its conference.

That was the thought running through my head on Tuesday as I watched Iowa State practice at the Sprint Center in Kansas City. This did not look like a group of guys ready for their season to be over or ready to get away from each other.

They were laughing, joking and competing — most notably in a spot shooting drill to end the 40-minute practice. Now, I know this is certainly a much different setting than a typical practice, but it was good to see the guys on the court when the stands were empty for once.

They look loose entering Wednesday night’s Big 12 Tournament opener against Texas, an approximately 8 p.m. tip on ESPNU. They looked like a team that knows it has nothing to lose this week.

Only time will tell if being loose is a good thing when it comes time to actually play a game. It at least seemed like a good thing on Tuesday. Here are three more points on Iowa State and Texas in the first round of the Big 12 Tournament.

It is starting to seem more and more likely Texas will be without freshman center Mohamed Bamba when they take the court late Wednesday night. The freshman phenom missed the Longhorns’ regular-season finale win over West Virginia due to a sprained toe and that injury apparently continues to bother him entering this week.

Bamba’s absence will certainly be the Cyclones’ gain. The 6-foot-11, 225-pound second-team All-Big 12 honoree combined to score 34 points and grab 28 rebounds in Texas’ wins over Iowa State this year.

The Cyclones simply had few answers for what Bamba was able to bring on the offensive end of the court. On the flip side, despite Bamba averaging more than three blocks per game this season, he has had little luck neutralizing Iowa State’s freshman center, Cameron Lard.

Lard had 21 points and 16 rebounds in the loss on Jan. 1 then followed that up with 12 points and 12 rebounds in the contest on Jan. 22. If Bamba can’t go, the duty of limiting Lard falls onto the shoulders of freshman forward Jericho Sims, a former Iowa State target on the recruiting trail and the reigning Big 12 Newcomer of the Week.

While Sims is a fine player, I think this a battle Iowa State comes out of positively when Lard is playing at his best. Unfortunately, Lard hasn’t been playing his best as of late considering he combined to go 2-of-15 from the field and scored 11 total points in the Cyclones’ last two regular season games.

“I was getting the shots that I wanted,” Lard said after practice on Tuesday. “I just wasn’t finishing around the rim, missing easy layups so I’ve just got to get myself back going.”

If Lard gets himself going on Tuesday, he could have a monster night in his first appearance at the Sprint Center.

2 — Is Donovan Jackson back to his usual self?

One of the highlights of Iowa State’s open to the media practice on Tuesday was seeing how much fun Jackson was having on the court. Whether he was joking with teammates or trying to win the team’s end-of-practice shooting drill, the Cyclones’ senior sharpshooter always seemed to have a smile on his face during the 40-minute session.

That is saying something when you consider everything the Milwaukee-native has gone through in the last two weeks following the sudden death of his father.

To make things even better, Jackson was on fire from behind-the-arc to close practice and claimed to have not missed during the last 15-minutes on the court. I don’t know if that’s a factual time-span, but I can certainly agree that his shot appeared to be dialed in.

“I think he’s back from a standpoint of just regular Donovan,” Iowa State head coach Steve Prohm said. “I check on him every other day because there’s a lot going on, obviously, but it was good to see that out there. It was good to see him make a bunch of shots then the second thing is it was good to see him having fun. When he walks in this (arena), this is a great moment for him. He was part of history here. He should feel good coming in this building.”

Jackson will be the only available Iowa State player on Wednesday who has played in a Big 12 Tournament game. The Cyclones will need him to be at his best in order to advance to a quarterfinal matchup with Texas Tech on Thursday.

3 — Can the Cyclones play team basketball?

This has been one of the biggest underlying questions for the Cyclones this entire season. When they’re playing team basketball, they can be really good (see wins over Texas Tech, Oklahoma and West Virginia).

When they’re not playing team basketball, they can be really bad (see losses to Tennessee, Milwaukee, Oklahoma State, Kansas State, okay, that’s enough this list is way longer and it makes my head hurt).

The issue of not playing team basketball is a major part of why Lindell Wigginton called his teammates out for not buying into what Prohm and his staff are teaching after the team’s loss to Oklahoma last Friday. While slightly troubling on the surface, I think this was a great thing for Wigginton and the future of Iowa State basketball.

This was a freshman — who happens to be the team’s best player — taking control and making it clear what has happened this season is unacceptable. It can’t be acceptable if Iowa State hopes to live up to the potential next year’s roster will hold and Wigginton’s comments in Norman seem to be setting that foundation.

“We’re all trying to play one-on-one basketball,” Wigginton said in Kansas City when asked about his frustration last week. “Coach is not preaching that to us. He wants us to play team basketball, buy into the defense and buy into what he’s teaching us on offense.”

If they can do those things, maybe there will be a little run left in the Cyclones this week at Hilton South.