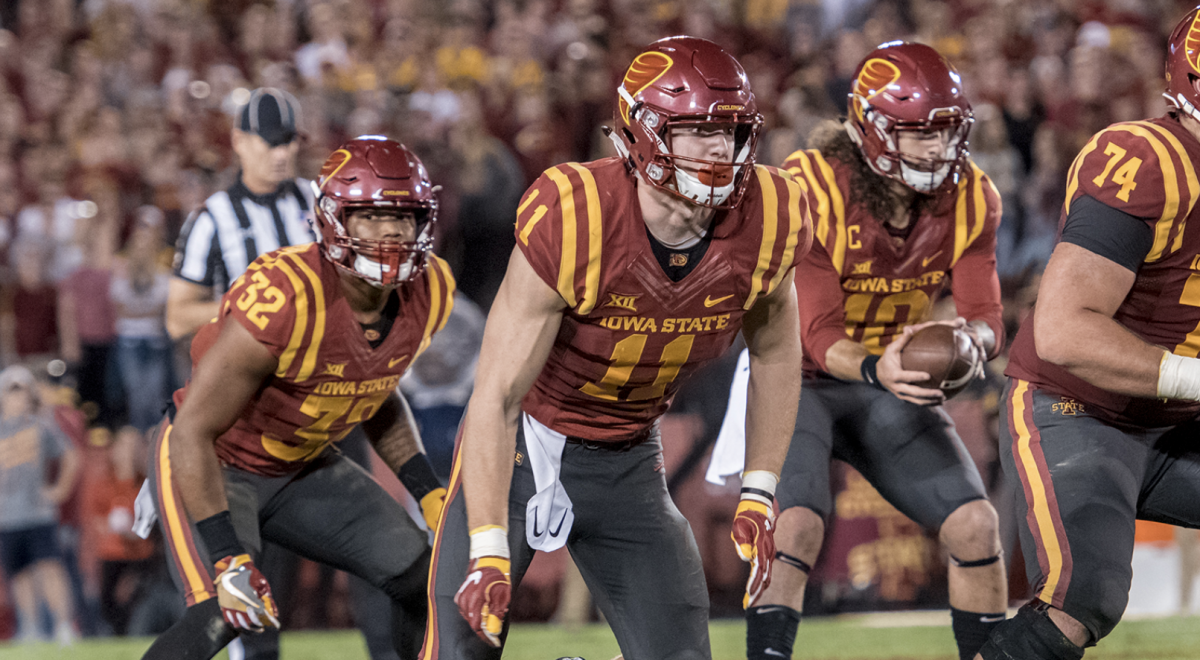 Iowa State sophomore tight end Chase Allen follows it diligently, but is also granted the freedom to make his own food choices in efforts to layer more weight on his athletic 6-7 frame.

And between lifting, science and some old-fashioned indiscriminate eating, Allen’s raw weight has finally caught up with his brimming talent.

The second team All-Big 12 selection has bulked up from 220 pounds to 245  — and mega protein shakes, fruits and vegetables aren’t the only fuel Allen regularly consumes to tip the scales.

Yum? Sometimes. But Allen’s not counting calories, or always looking forward to ingesting so much food. He eats at least every three hours and times his largest meals to reside within post-workout recovery windows.

“A lot of food,” said Allen, the Cyclones only tight end to catch a pass last season. “Eating myself sick, but just being consistent with it, going in every day.”

Allen’s naturally lean, so his all-in approach in terms of adding heft to his body hasn’t slowed him a bit.

If anything, the added weight has accelerated his progress toward becoming a productive pass-catching tight end, something the Cyclones haven’t had since E.J. Bibbs starred at the position from 2013-14.

“Dylan (Soehner), Charlie (Kolar) and I have worked a lot with the receiving coaches this offseason and getting our route-running down,” said Allen, who caught four passes for 39 yards last season. “We’ve taken a lot of strides, I believe, and hopefully all three of us are going to have the opportunity to fill that gap that the great seniors last year left behind.”

The Cyclones graduated all-time leading receiver Allen Lazard along with solid performers Trever Ryen and Marchie Murdock. Top talent at wideout returns in Hakeem Butler, Matt Eaton and Deshaunte Jones, but the time is now for ISU’s tight ends to wed their already-solid blocking skills to an ability to stretch the field as receiving threats, as well.

“Those guys, when you recruit ‘em, you’re not sitting there watching blocking highlights, otherwise I don’t think any of those guys would be here,” Cyclones recruiting coordinator and tight ends coach Alex Golesh said. “I think for them, they’ve got to do a lot of the dirty work, but at the end of the day the award for those guys is to catch the ball and I think we’re finally ready in terms of those guys being old enough and us losing some key pieces. … Now they see the light, too. I don’t think — a year ago, none of them complained about anything.

“It’s like, ‘Would you rather throw it to Allen Lazard?’ Or who are you taking catches away from? Trever had a great year. Marchie had a great year. Matt Eaton. You go on and on. There’s only so many balls and then by the way, you’ve got an All-American in the backfield you’ve got to give it to, so I think now they’re seeing the light in that sense, that, ‘Hey, there are balls that can come my way,’ and for them, they’ve got to prove it and I think for Chase that is the next step: ‘I’ve got to prove it. I should be the one getting balls,’ and again (he’s) got the next 13 practices and 29 in the fall to show our offensive staff that that’s what he is.”

Same goes for Soehner and Kolar.

Soehner — who also stands 6-7 and has trimmed down to 272 pounds — has impressed ISU head coach Matt Campbell with his versatility and likely will see plenty of game snaps, as well.

“He’s a really big mismatch guy,” Golesh said. “He can block. We’re fired up about him taking the next step just as an overall player, because he’s the one guy in that room that can probably play every spot on the field. The difference between can do it and will do it is these next 13 practices.”

And on into the fall, where roles as well as shoulder spans are likely to expand.

“Me and Chase both, there’s not a lot of guys on the perimeter that can measure with us height and weight, (or) strength — anything,” Soehner said. “So definitely we create a mismatch out there and I think that’s something we’re going to look forward to doing.”

Soehner was listed at 283 pounds last season and managed to get on the field in an expanded  blocking-based role the second half of last season.

He’ll plan to shave off a few more pounds to hit a playing weight of 265.

He’s also been impressed with Allen’s commitment to piling on the pounds — and the evident results.

He’s eager to stay up there, too.

So Allen’s spoon will remain like a shovel. His fork, more of a forklift. The blender will whir at high speeds and outside of sleep and practice, food will be Allen’s constant companion.

“When you’re undersized, you really have to rely on technique more than anything else,” Allen said. “Footwork drills, that’s something that we did a lot last year and that’s something that was one of my strengths, so having more force behind it, you can get more vertical push with things and just feel more in control of your body — and the guy you’re blocking.” 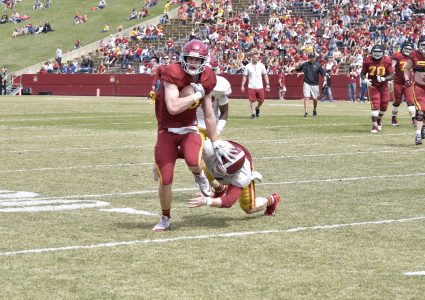 CFTV: Allen and Soehner on how the tight ends can see expanded roles in 2018