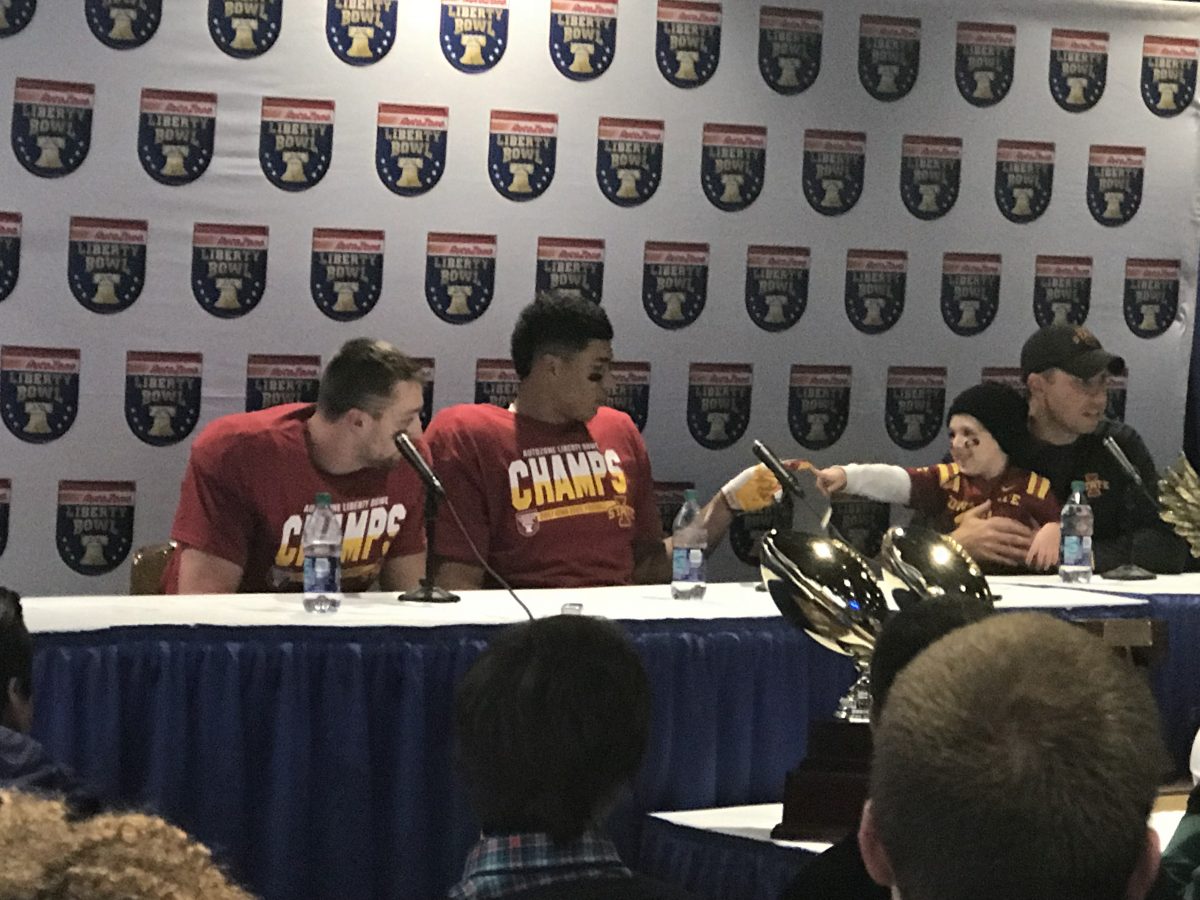 Rudy, perched on his father’s right knee and fiercely adorned with eye black, pointed to — and even playfully stuck his tongue out — at two of Iowa State’s all-time greats while they sat, both drained and elated, pondering the culmination of their Iowa State careers after an adversity-littered 21-20 triumph Saturday over Memphis.

They deserved the light moment — after so many high and low moments strewn across storied Cyclone careers. Lanning ended the Tigers’ last-gasp (and phantom PI-aided) drive on an all-out blitz. Then moments later, he jogged back on the field as the quarterback, with one thought in mind.

“Just asking me to get a few yards,” the man dubbed “Iron Man,” said with a shrug after ISU (8-5) won a bowl game for the first time in eight years. “In that situation, we just needed one first down. And I was talking to Josh Knipfel, the guard, and he was pulling. I mean, if he didn’t pull, I might still be running, or if he didn’t fall down, I might still be running. So they’re just not asking a lot from me. You can obviously see that, coming in on these short yardage situations, goal line. But yeah, when I come in there, they’re all pumped up. They know what’s going to happen and, you know, just come in there and try to run the clock out.”

“They’re not asking a lot from me.”

Only over 1,000 snaps in a season that landed him on ESPN SportsCenter features and an elite All-American team.

So on second down and seven from the ISU 43, Lanning took the ball and pushed forward. Knipfel did his job, as did everyone else. He bounced off one tackler as the clock drifted under 1:40 remaining, and dragged a few more for a nine-yard game.

It sealed the win. It cemented the Ankeny native’s legacy. And it sent the almost 25,000 Cyclone fans — whose sheer number and volume both impressed and angered the hometown Tigers’ devotees — into full “Cyclone Power” chant mode.

And, fittingly, everybody had a hand in it.

“For Joel, the play that comes at the end of the game, coach (Tom) Manning’s got to get a lot of credit, too,” said Campbell, whose team overcame a controversial fumble by David Montgomery at the goal line before Memphis’s last drive. “We had been trying to shift and run the ball to (Sam) Seonbuchner’s side and David Montgomery comes up with a huge block. He’s the guy that blocks and kicks out the end and we ran it away from him. A great call from coach Manning and obviously a great job by the O-line, but for Joel to be the guy that ends the season with the ball in his hand and for Allen Lazard to have 10 catches — it’s why we were who we are this year. It’s because guys like that were willing to be their best week in and week out. I’m beyond grateful and really humbled by who these two are and what they stand for.”

Oh, about Lazard. He set another single-season program record with his 10th touchdown catch — and it proved to be the game-winner.

Quarterback Kyle Kempt lofted a second-and-goal pass from the five-yard line toward the back of the end zone. It grazed receiver Marchie Murdock’s hand, then Lazard reached out and grabbed it, falling down, keeping both feet in bounds.

“We practice drills like that all the time,” said Lazard, who caught 10 passes (a Liberty Bowl record) for 142 yards (an ISU bowl record). “We have a (practice) period called one to 12 where we kind of just focus on maintaining the ball and not fumbling it and also catching the ball in traffic. That’s just kind of one of those freakish plays that happens and I was lucky to be in the right place at the right time.”

That’s how Campbell — and maybe Rudy, too — feel at the moment.

Actually, that sense that something special would happen. The fervent belief that ghosts of ‘here we go again’ past would finally be fully chased from the Cyclones’ attic in Ames and on another team’s bowl turf, struck Campbell before he took the job two years ago.

It’s why this season of twist, turns and soaring moments brought out his emotions on the eve of the game.

“I choked up last night in our team meeting because this group is a group that’s as special as any group of young men that I’ve really been around,” Campbell said. “And when we came in here two years ago, I’d never been around a group of kids that I just felt like hope was missing. I think for me, we were constantly trying to figure out how we were going to create hope and how we were going to get this thing turned around. As a coach, you can do as much as you want, but until the players really buy in and take ownership of the program — coaching’s way overrated to be honest.”

These seniors, this team, never will be. They took to the road along with the fans and held the nation’s second-most prolific scoring offense 27.7 points below its season average.

That’s epic. That’s redemptive. And I, for one, reckon that it’s Rudy-approved.

“I thought it was a fitting way for this football team to end its season,” Campbell said.