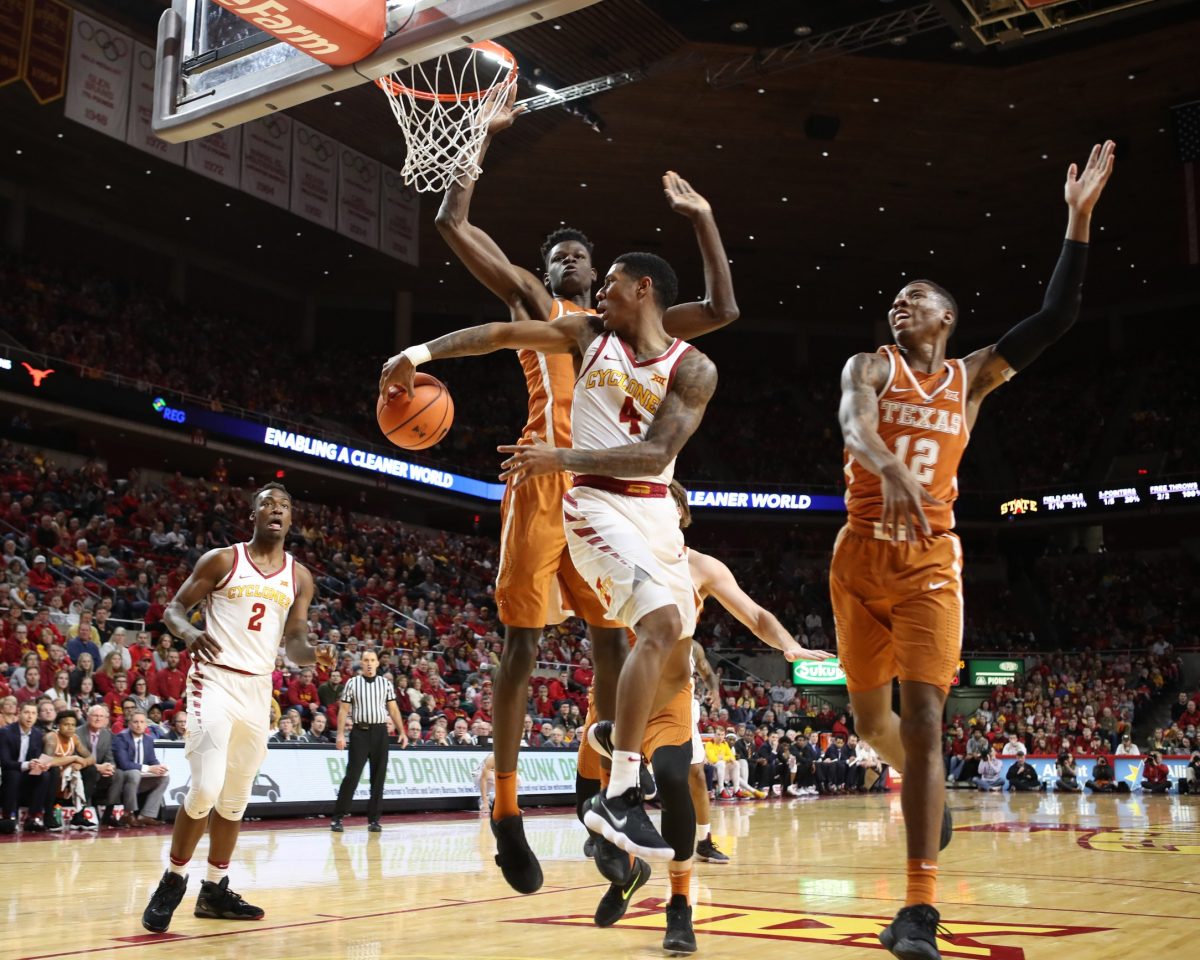 AMES — He soared. He battled. He swatted and slammed with abandon.

In sum, Iowa State big man Cameron Lard played by far the best game of his young career Monday against Texas, but it wasn’t enough to help the Cyclones avert a disappointing 74-70 overtime loss at Hilton Coliseum.

“I was just catching the ball and being patient whenever I got it in my hands,” Lard said. “That’s what coach (Steve Prohm) preached to us in practice for this game.”

Better question: Will the Cyclones devise ways to get the talented 6-9 redshirt freshman more involved on offense?

The answer to that is a resounding yes — but it may take some time.

“Going forward, no question,” said Prohm, whose team started conference play with two losses for the first time since the 2010-11 season. “I’m just trying to figure out the best way to add things with this team, because you keep throwing things at them and you’re still just trying to get your fundamentals right.”

Essentially, Lard’s role in the offense can, should and will grow, but how quickly and how dramatically it expands depends upon a variety of factors.

“We’re still learning habits,” Prohm said of his largely inexperienced team. “We’re still — so to put in actions and learn different actions, it’s just throwing another thing at them. So we’ve just got to learn how to get him more touches in what we’re doing now and just be more conscious of throwing it in there.”

As far as Lard starting or coming off the bench, that didn’t matter Monday against the suddenly hot-shooting Longhorns (10-4, 1-1), who canned a season-best 13 shots from 3-point range.

Lard played a career-high 33 minutes — including 22 of 25 available minutes after halftime.

He scored 13 points and grabbed seven rebounds after the break and teamed with guard Donovan Jackson to score 12 of 14 point during a 14-5 run that put the Cyclones up 49-41 with 12:08 left in regulation.

“He did a terrific job tonight,” Prohm said. “I thought he really competed. He makes free throws for the most part; I know he missed those three in a row with the lane violation, but there’s no question, attention to getting him one or two more actions — we would love to get toward where we’re really trying to get him the ball and put him in a situation where people can’t dig or double him. Then I thought Donovan did a good job tonight getting him some looks.”

Jackson led the Cyclones with 24 points and Nick Weiler-Babb provided balanced leadership yet again with a line of nine-eight-nine.

Jackson’s sixth 3-pointer gave ISU a 61-59 lead with 58 seconds left in regulation, but Longhorns guard Matt Coleman knifed in for a lay-up to tie it 14 seconds later.

Jackson’s lay-up with 52 seconds remaining on OT  tied the score, 67-67, but Texas big man Dylan Osetkowski drilled his seventh 3-pointer (say what — he was 11 of 46 entering the game) to put his team up three moments later to essentially seal the game. It also simultaneously made the Cyclones path to success in the league extremely narrow — whatever Lard’s role is going forward.

ISU forward Hans Brase missed his third straight game because of a sprained left ankle. He took part in the shootaround today, but it was clear the healing process needs more time. Next hope: Playing Saturday at Oklahoma State.

“I asked him when he came over to the bench, right before starting lineup (announcements), I just said, ‘Hey, are you good?'” Prohm said. “He just said he didn’t think he could do it. So now the next goal is (Saturday at) Oklahoma State.”

Prohm said guard Zoran Talley, who suffered a stress fracture in his foot in the Nov. 25 win over Western Illinois, could be available against the Cowboys, as well.

It’s very much a ‘stay-tuned’ situation for him, as well, though.

“Zoran will start practicing Wednesday,” Prohm said. “And then he’ll probably dress out for Oklahoma State. How much he’ll be ready — because he has not practiced in probably a month, I’m guessing, or remebering everything we’re doing and jsut getting him back inthe swing of things. But it does add an extra dimension for us to throw out there if we need it. But we miss Hans. If oyu’ve followed our team, you know what he brings to the table, but we’ve just got to be patient and get him healthy and hopefully he’ll be ready to go Saturday.”