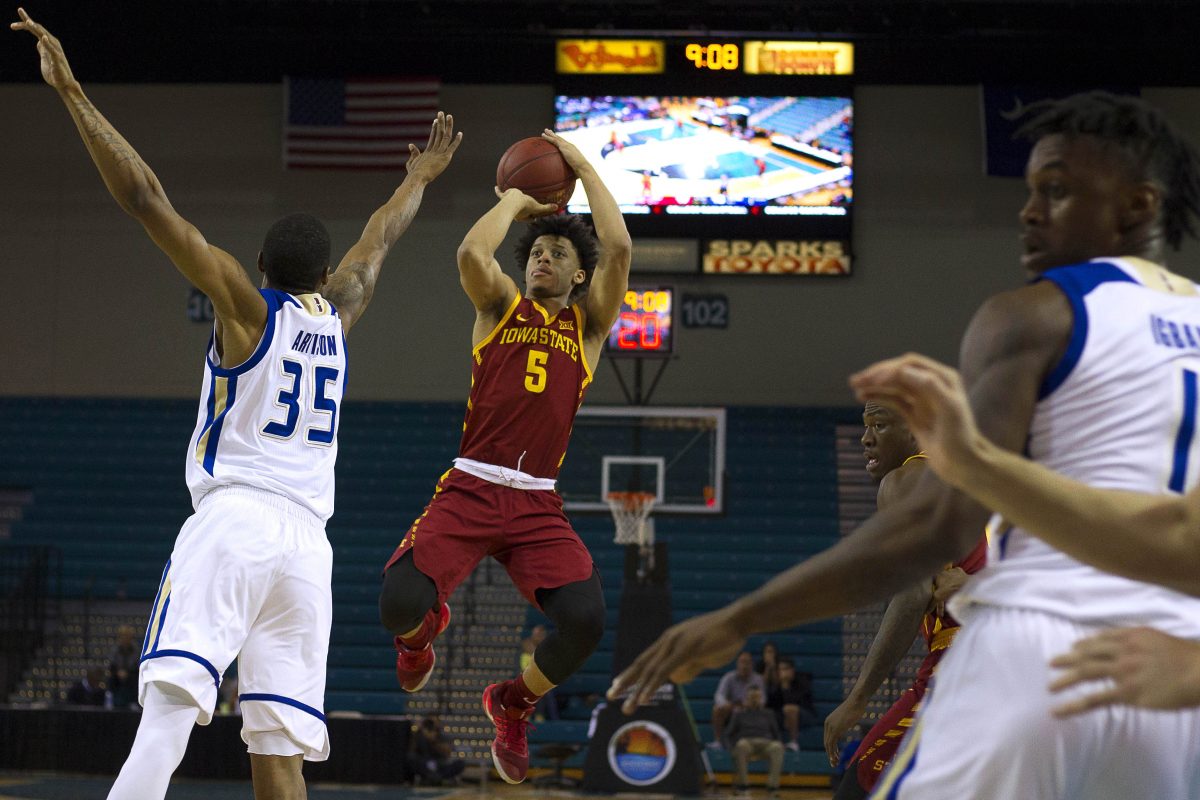 AMES — It was a baseball analogy that allowed Steve Prohm to best explain the way he wants Lindell Wigginton to play.

Iowa State’s head coach originally used it while trying to simplify what made former Cyclone star Monte Morris so good during a conversation on Monday. Wigginton made it relevant again Monday night when he scored 28 points on 9-of-15 shooting, grabbed seven rebounds and dished four assists in a 94-80 win over Northern Illinois.

“I use a comparison with Monte. Somebody asked me today, ‘What was so great about him?’ I said, ‘Man, he had a career full of singles. But after the second single, you’re knocking in a run. Then the next one you knock in another one and he knocked a lot of runs in,” Prohm said after the game. “So just getting (Lindell) to understand when a single’s great and when a double’s great or when to turn and try to go for three. He was terrific tonight.”

Iowa State’s rookie phenom made becoming the program’s first freshman with back-to-back 20-point games since Curtis Stinson in 2004 look easy. It was exactly the kind of performance Cyclone fans were hoping to see from the former five-star recruit when he signed with the school last year.

His 49 points in the last two games ties for the third-best two-game stretch by an Iowa State freshman. It is looking like Wigginton has figured out this college basketball thing — and that should be scary for teams on Iowa State’s schedule.

His 13 points in the first half Monday night played a big role in the keeping the Cyclones afloat against a Northern Illinois team that entered the game No. 248 in the KenPom rankings. Even then, Iowa State trailed 38-36 entering the locker room.

“I didn’t get in the locker room until about seven minutes until the second half,” Prohm said. “I just thought our effort wasn’t really good on the defensive end. We scored 36 and missed several layups. Missed some open threes to where we could’ve been 40, 45. But defensively, how many times were they just at the rim in transition, in the half court, ball screen coverage, ball pressure, too much middle penetration. So was frustrated with that. Then just frustrated with some of the effort. Offensively, not sharing the ball like we needed to.”

It did not take the Cyclones long to find their intensity once the second half started. They went on a 14-6 run immediately out of the break before outscoring the Huskies 58-42 after halftime.

Wigginton added the other 15 of his points on 6-of-9 shooting while Donovan Jackson knocked down five of his career-high six 3-pointers in the second half to give him 24 points and his fourth career 20-point game.

Nick Weiler-Babb scored only three of his 12 points after the break, but he continued his impressive play at the point guard spot by dishing eight of his 11 assists. Cameron Lard scored 12 of his 14 points on 6-of-7 second-half shooting.

Simply, whatever Prohm said in that locker room worked.

“I think in the first half we didn’t show a lot of intensity. Not on the offensive end and the defensive end,” Wigginton said. “Then Coach told us in the locker room we’ve got to be more intense and play more defense, go at it on offense. I think that’s what we did.”

The way Iowa State played in the second half Monday night is close to the style of play Prohm preached about nearly a month ago following a shocking home loss to Milwaukee. He talked about needing toughness, nastiness and playing with pace.

They have gotten a lot closer to that style of play during this five-game winning streak dating back to the first round of the Puerto Rico Tip-Off.

Will they be able to maintain it for entire games? Who knows at this point. The process of finding out starts Thursday night when Iowa visits Hilton Coliseum.

Monday night’s second half did tell us one thing for sure. This team is exciting when they bring the intensity.